Coming-of-age angst and self-discovery set against the Southern Californian skateboarding circuit are enthusiastically explored in the directorial debut of Oscar-nominated actor Jonah Hill in his observational and exuberant vehicle, Mid90s. As producer-writer-director and product of a 90’s West Coast teenage upbringing, Hill spins a heartfelt tale of growing pains balanced by skateboarding rebellion, a sense of tribal belonging, and inescapable domestic disillusionment.

In his filmmaking vision, Hill concocts a moody landscape of surfacing torment and anxiety accompanied by a soundtrack of 90’s hip-hop rhythms that ultimately paints a disturbing, yet solid, narrative about skating culture and its influence on a wayward youth looking for an escape from foul-minded forces at home. Hill’s script is layered marvelously for its search for salvation in the middle of one young kid’s chaotic struggles for rescue and reassurance.

Stevie (Sunny Suljic, “The Killing of a Sacred Deer”) is the damaged pawn at the center of the storm. As a Los Angeles-based 13-year old kid with a harrowing home life, Stevie’s emotional detachment is quite understood. He comes from a single-parent household (his father absent as his mother toils financially) and is constantly victimized by his brutish big brother Ian (Lucas Hedges, “Boy Erased”), who himself is dealing with his own major mental issues. In fact, the self-punishment practices that Stevie performs on himself is indicative of how insanely twisted and tainted his psyche is as a result of the neglect and abuse he encounters at home.

Looking for a distraction to counter the antagonism at home, Stevie decides to seek out his own tough-minded identity away from the roof of his dysfunctional house. It is here at the local skate shop where Stevie, hooking up with a group of older skaters, that he finds it. The corrosive crew he enthusiastically bonds with consists of Fuckshit (Olan Prenatt), Fourth Grade (Ryder McLaughlin, “Summer of 17”), Ray (Na-kel Smith) and the younger Ruben (Gio Galicia). Now armed with his trusty skateboard, his own nickname (Sunburn) and street-wise guys to run with, Stevie feels a sense of security and a want to test the limits of authority.

Mid90s strikes triumphantly and has more emotional and psychological flips and flops than the skateboarding tricks featured by these junior-sized daredevils. Suljic is raw and riveting as the detached Stevie, blindly yearning for purpose through the path of aimless swagger. The audience realizes the obvious hurting and haunting of Suljic’s convincing, pained performance. “Manchester by the Sea” Academy Award nominee Hedges presents another Oscar-caliber performance as the psychotic older brother bothered by his inner demons that cause him to inflict torment on his vulnerable younger brother. Katherine Waterston’s (“Fantastic Beasts: The Crimes of Grindelwald”) Dabney registers solidly as the conflicted mother of misguided, broken boys. As supporting players, Stevie’s/Sunburn’s posse are colorfully strident in their degenerate wasteland.

Hill aptly champions the skateboarding craze and the urbanized Los Angeles backdrop that promotes its roguish brand, but never lets it overcome the messaging about jeopardized youth and the foundation of crisis that stems from the broken home. Gritty, intrinsically telling and soul-searching, Mid90s is a strong first directorial effort from the artistic-minded Hill showing he has creativity both in front of and behind the camera lens. 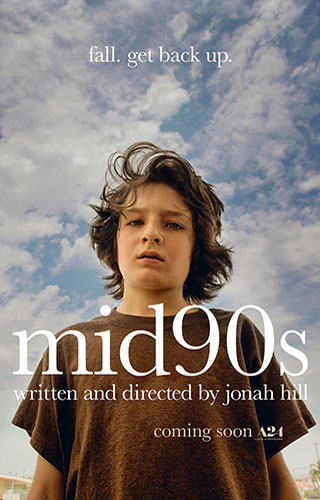