While it’s hard enough to make a successful comedy when more than half of the country does not understand the premise; it’s just as difficult to do so when the much of that film’s subjects concern gangs, drive-by shootings and murder. Yes, getting killed can sure put the kibosh on one’s funny bone. Still, the creators of the “Barbershop” franchise (which began in 2002 and was directed by Tim Story and starred Ice Cube and Cedric the Entertainer; a lame sequel, “Barbershop 2: Back in Business,” directed by Kevin Rodney Sullivan was next in 2004, as well as an even dumber cable TV series) have no problems with either obstacle.

And although the first was often critically-acclaimed as a comedy with heart, the fact that it has taken more than a decade to make a third installment might tell one something else. Just look at the track record of films with the numeral 3 (including Roman) in the titles — “Superman III,” “Alien³,” “Spider-Man 3,” “The Godfather Part III,” as well as thirds without a number in their title like “The Matrix Revolutions,” “X-Men: The Last Stand” and “Pirates of the Caribbean: At World’s End,” to name but a few — and you will get my drift.

Anyway, this number three, Barbershop: The Next Cut, under the deft hand of Malcolm D. Lee (who helmed “Scary Movie 5”), begins with Calvin, the shop’s owner (Ice Cube, born O’Shea Jackson and recent star of another headscratcher of a sequel “Ride Along 2”; speaking of which, I’m surprised the ubiquitous Kevin Hart did not appear in this one) offering an ode to the south side of Chicago, the home of President Barack Obama and the home of some of the worst gang violence in the country.

In the midsts of all of this, Calvin has to share the rent with women’s stylist, Angie, (Regina Hall, “Vacation”) to make ends meet. This situation also allows the battle of the sexes to come to the forefront as the misogynistic staff and customers of Calvin and the sassy sisters who work for Angie get their hooks and claws in during the shop’s interior conversation sequences (example, we learn that in the black community, for instance, women like men with above average-sized genitalia, like women of EVERY community, I suppose). The result, Cedric the Entertainer (“Larry Crowne”) as the ancient Eddie, is really the only consistently funny person in the whole film and his often politically-incorrect barbs are more interesting than the plot of Calvin’s son, Jalen (Michael Rainey Jr., “Orange Is the New Black” TV series and whose acting skills make Jaden Smith look like Denzel Washington). It seems that Jalen and his friend are alienated from their parents and turn to gang members for the support they cannot get at home.

These scenes, while competent on their own, mix awkwardly with the sexual innuendo (and downright overtly sexual situations) and other goofball characters which can only take place in Hollywood, i.e., Calvin’s best friend, Rashad (Common, born Lonnie Rashid Lynn Jr., “Run All Night”) has every woman in the shop throwing themselves at him, including Draya (Nicki Minaj, the woman who ruined the singing competition TV show “American Idol”); a resident idiot, Jerrod (Lamorne Morris, “Sex Ed”); the jack-of-all-trades operator One-Stop (J.B. Smoove, “Top Five”) and the token “non-Negro,” Raja (Utkarsh Ambudkar, “Freaks of Nature”).

With all of the silliness going on, it’s difficult to care about how Calvin plans to sell his part of the business and move to the north side, or how Jerrod comes up with the idea to use the venue as a “safe zone” and have a cease fire for 48 hours, and especially the throwaway shooting death of one of the characters. Barbershop: The Next Cut is ambitious and certainly worthy of a look, but in the end, becomes a preachy, pandering and boot-licking homage to Obama, a Chief Executive more than half the nation has a problem with (an impersonator even appears at the end for a stale routine). As such, I have to take the entire proceeding with less than a grain of salt.

This is more than proven when the safe zone idea goes viral and several “celebrities,” including pro basketball player Anthony Davis, among others, show up. See Barbershop: The Next Cut if you must, but do not expect to learn any more about the characters of any other blaxploitation comedy or much about the current state of racial relations for that matter. 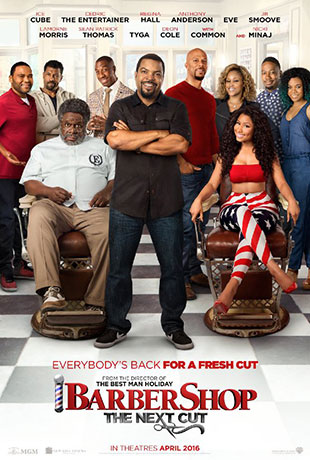