When I first saw the trailers for When the Bough Breaks, I was excited. It looked like “Obsessed,” “The Hand That Rocks the Cradle,” or “Single White Female,” except with fewer white people (something most movies these days could benefit from). When I first sat down in the theater, I was still excited. The pacing was slow, the main characters sympathetic and endearing, the villain of the film intriguing and mysterious. Unfortunately, what begins as mystery ferments into mess, and despite some truly wonderful acting, a striking setting, and initially suspense augmenting subplots and stakes ends both abruptly and far too long after once wide audience eyes will have begun to roll. I didn’t feel excited again until I saw the credits appear; I’d spent the second half of the movie’s run time just itching to stand up and leave.

When the Bough Breaks is the story of Laura (Regina Hall, “Barbershop: The Next Cut”) and John (Morris Chestnut, “Kick-Ass 2”) Taylor, a kind, beautiful, philanthropic, slightly older power couple, and their quest to have a baby. After years of attempting to conceive in spite of demanding careers, multiple miscarriages, and other hardships, the Taylors seem to have found the perfect surrogate in Anna Walsh (Jaz Sinclair, “Paper Towns”), a young woman their doctors think would be a good fit. At least, they truly hope they found her; at this point, they only have one embryo left.

Anna is twenty-one, new to the city, and engaged to Mike (Theo Rossi, “Cloverfield”), who is about to be deployed overseas. She handles herself elegantly in a requisite pre-interview, which Laura watches remotely with a doctor, ostensibly fully understanding and embracing the responsibilities and limitations of surrogacy. As she says to Laura soon after, she’s never had anything anybody else wanted before. It means a lot to her to be able to give the Taylors something. Laura is so convinced they’ve found the one, she quickly meets with the girl in person, not even calling John about it until after the fact. To his credit, John seems more wary than his wife is, and only becomes more so after Laura invites Anna and Mike over for dinner and the two men share a tense moment alone. Still, Laura is happy in a way she and her loving husband have always wanted to be, so they proceed with the insemination as planned.

Of course, it isn’t long before Anna and Mike prove themselves to be far more than the Taylors bargained for. This is also when (if you’ll forgive me) as far as the viewer is concerned, the bough begins to break.

Again: The sets are beautiful, the costuming is almost distractingly lovely, and it would be an understatement to call the acting on point. It is the writing and directing that bring When the Bough Breaks down. Reminiscent of the aforementioned thrillers in that Anna develops an obsession with John and begins taking advantage of the Taylors’ hospitality in what seems like as many ways as she can, what it lacks is the context and intention those other films provide. Newcomer Jaz Sinclair’s acting is nothing short of phenomenal, the only problem is how many different types of characters she has to play to bring the exhaustingly multifaceted Anna to life. There’s serene, generous Anna; desperate, lustful Anna; quiet, battered Anna; violent, manipulative Anna; the list goes on. While Mike’s motivation for part of the drama is partially explained, it is never clear to the audience how on board with his plan his fiance actually is or was or what her own ulterior motives are. Her fixation on John does not have a clear fountainhead either; it escalates far more quickly and clumsily than the one between Ali Larter and Idris Elba’s characters in “Obsessed” and though there were clear opportunities to explain it, they are just never taken advantage of.

When Anna’s backstory is finally revealed, it is too cliché to really inform her character at all, and creates far more problems and questions than it takes care of. Her myriad identities clash with, rather than explain, each other, making her unpredictability itself frustrating well before the film’s end. Sinclair truly does an amazing job cultivating and portraying each of these identities, but in the end Anna is just too, too much. Even in during cheesy voiceover moments and a very unintentionally funny bathtub scene, it is clear that the writing and directing, rather than Sinclair (or anyone else)’s acting, are the reason this film flops.

One instance of especially good acting on Sinclair’s part (and again, there are many) occurs when Anna and John are in an aquarium shortly before her due date. In just a few silent seconds, Sinclair’s face cycles through hope, love, happiness, frustration, and fury. Her talent is truly something to be watched. Unfortunately, the same cannot be said of the second half of this movie.

All of this having been said, one aspect of When the Bough Breaks that is worthy of as much praise and publicity as possible is how educational it is. A notable amount of information regarding fertility treatments and surrogacy from a legal standpoint is organically included in the dialogue of the film. The entire implantation of Laura and John’s embryo into Anna’s uterus — by a female doctor, no less — is actually shown on screen. There is even a scene afterward in which Laura muses about how it’s against the law to pay someone for sex, yet surrogacy is legal. At one point Anna and John even discuss the unique strangeness of her, a near stranger with whom he has never been physically intimate, being pregnant with his child. When domestic violence happens off screen, its victim is shown asking a police officer how law enforcement plans to protect her from a follow up attack. The officer’s response, that all she can do to protect herself is call again next time, is the sad — and preventable — reality behind the innumerable fatalities linked to intimate partner violence that this country experiences every year. Funny — with that much effort put into accurately portraying certain aspects of this film, you’d think the specific nature of Laura’s job (she says she’s a chef but we only see her in fancy clothing and she spends a portion of the film flying around the country to get a promotion from a CEO?) wouldn’t be quite as incomprehensible as it is.

Another major problem with Laura’s character is the contrast between how much of When the Bough Breaks is dedicated to depicting her as a smart, strong, fearless character and how much of the movie she spends waiting by herself in the house or the car while major action sequences are going on. The filmmakers might think they threw her a bone at the end, but the way in which they did so is so obvious, late, and cheap that it doesn’t really remedy anything at all.

Despite its superb cast, novel conceit, and stunning cinematographic and costume choices, overall sloppiness, lack of context and intention, and simultaneously too quick and too slow conclusion are nowhere near enough to catch this cradle when it falls.

'Movie Review: When the Bough Breaks (2016)' has no comments 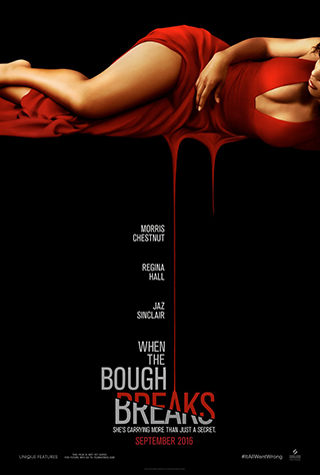