While the scientific consensus supports mankind’s role in causing or at least strongly contributing to global warming, some scientists point to increased solar activity or the natural cyclic effect of climate change as the cause. Others claim that computer models have left out “the complex interaction between warm southerly winds, variations in cloud cover, and sunlight reflection from open water.” According to 1,300 independent scientific experts from countries all over the world under the auspices of the United Nations, however, there is a more than ninety-five percent probability that human activities over the past fifty years have warmed our planet to the point that we must take steps to curtail the emission of greenhouse gases before we reach a point of no return.

In An Inconvenient Sequel: Truth to Power, Al Gore returns to center stage updating and expanding on Davis Guggenheim’s (“He Named Me Malala”) award winning Oscar-winning 2006 documentary “An Inconvenient Truth,” a film in which Gore raised public awareness about climate change. The sequel, directed by Bonni Cohen and Jon Shenk (“Audrie & Daisy”), replaces the multi-media presentation and lecture-hall atmosphere of the earlier film with a broader, more cinematic effort. Focusing more on the personality and accomplishments of Al Gore, a former Vice-President and winner of the Nobel Peace Prize in 2007, the camera follows Gore around the world where he confronts rapidly melting glaciers in Greenland, wades into flooded streets in Miami, Florida, and visits areas of recent climate disasters such as Hurricane Sandy, the Fort McMurray Canada wildfire, and Typhoon Haiyan in the Philippines.

We learn that the predictions that Gore made eleven years ago have happened at a faster rate than thought possible at the time — bigger and more destructive storms, the drying of once fertile lands, and the flooding of the 9/11 memorial in Manhattan. Gore is shown training supporters to take up the cause and act as his surrogates in climate change and advocacy. Although the film is more disjointed than the 2006 film, one of its cohesive points takes place in December of 2015 when world leaders meet in Paris to hammer out an agreement aimed at restricting the rise of global temperatures to less than two degrees Celsius above pre-industrial levels. Here Gore spreads the message among world leaders and attempts to broker an agreement with India by persuading the CEO of the American company SolarCity to grant India the right to patent a type of solar technology.

Although an agreement was eventually reached, the accord failed to mandate the rapid severe cuts to global emissions that were needed and fell short in many eyes. The agreement, however, did create a feeling of hope but that has taken a hit with the election of Donald Trump who announced in March that the United States will withdraw from the Paris agreement, saying the deal is bad for America. While there is little in the sequel that is new, Gore speaks with passion and increasing anger as he talks about how the environmental choices we have made have contributed to the current climate crisis.

While the film hopefully will inspire a new generation to understand and act on the climate crisis, what it does not say is that to reduce carbon pollution, we may also need to curtail consumption, reduce air and auto travel, and limit the production and consumption of meat. Even beyond that, however, the problem may not only be one of technology but a crisis of the human spirit, one that will require a transformation in lifestyles and values, perhaps a reorganization of society. As author Richard Heinberg (“Peak Everything: Waking Up to the Century of Declines”) notes, “In order to save ourselves, we do not need to evolve new organs; we just need to change our culture. And language-based culture can change very swiftly, as the industrial revolution has shown.” Although it stops short of proclaiming those goals, An Inconvenient Sequel: Truth to Power is a timely reminder of the life and death choices we face.

In his book, “How Soon is Now: From Personal Initiation to Global Transformation,” author Daniel Pinchbeck also attempts to wake us from our stupor. “We have,” he says, “unleashed planetary catastrophe through our actions as a species. We have induced an initiatory crisis for humanity as a whole. I think that on a subconscious level we have willed this into being. We are forcing ourselves to evolve — to change or die — by creating this universal threat to our existence. We will either squander our chance and fail as a species, or we will seize it, making a voluntary, self-willed mutation in how we think and act. This is the choice that faces us now.” An Inconvenient Sequel: Truth to Power may help us make the right choice.

'Movie Review: An Inconvenient Sequel: Truth to Power (2017)' have 2 comments 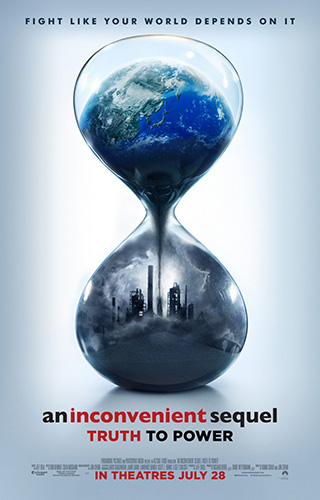 An Inconvenient Sequel: Truth to Power (2017)