I think it’s fair to say that Last Seen in Idaho is a well-balanced, albeit cheesy, thriller. It has a straightforward plot with the expected number of twists and it includes strong, believable, even relatable lead characters who are portrayed with an acceptable level of competence. Now, I know that sentence isn’t exactly a ringing endorsement of the movie, but I never expected this to be akin to “Black Panther” or “Ready Player One” or (insert favorite current film here).

Hallie Shepherd (“The Last Rescue”) plays Summer, a young lady with a troubled past (bad choices!) who works in an auto garage for Dex (Eric Colley, “Going Straight”). Summer has had to put off attending college for a variety of reasons but has promised to enroll with her sister Trina (Alexis Monnie) when the latter is ready. Unfortunately, even though her sister is all set to head off for some more schooling, Summer has had to dip into her savings to pay the bills. Now, this doesn’t set well with Trina, but Summer has other concerns. She’s long known that Dex, for reasons known only to him, has some shady dealing on the side. Maybe a chop shop, maybe a hide out for bad guys, who knows? But one of Dex’s associates is Lance (Shawn Christian, “Spanners”), who — perhaps unsurprisingly — is Summer’s ex. Lance is a no-good person. You can tell because he’s buff with slicked-back hair that’s almost daring to become a mullet. And tattoos. Well, to be honest, almost everyone in the movie has a tattoo, so it’s not necessarily a sign of badness.

Summer happens to witness something dreadful in Dex’s garage one night when she serendipitously returns to retrieve her cell phone. Something involving Lance and his cronies, and something Summer manages to record using said phone. She flees the scene in her early-1970s Chevelle, but the bad guys shoot at her, and she crashes, the car going up in a huge fireball. End of movie.

No, not end of movie. No, Summer wakes up in the hospital, of course, with Dex and Trina at her side. She sees a spot on the news reporting her own disappearance, but when she mentions it to her sister, Trina is nonplussed. Eh, it’s probably nothing. And naturally, Summer has no memory whatsoever of the accident. So imagine her surprise when Lance tasks one of his henchman, Franco (Wes Ramsey, “General Hospital” TV series) with ingratiating himself with Summer to find out what she truly remembers. You know, because of the dreadful thing Lance and company did in the garage the night Summer crashed and, for about five minutes, died.

Now, if this were real life, then Summer would either never remember a thing or would have to go into therapy to recall the events. There’s a detective snooping around, so she starts to wonder if there’s more to the story than her almost dying in a fiery wreck. This is a movie, though, and so Summer’s near death has given her the strange and convenient ability to see the future. This ability is mostly limited to when things are about to go sideways, sort of like her own personal Spidey Sense. She does get the occasional glimpse at a slightly further-off future, like seeing a billboard asking for justice for her murder. Which hasn’t happened. Yet.

It’s a race against time! Lance — and how could he be anything but a Bad Guy with a name like Lance — and his cronies will stop at nothing, I said nothing, to get to Summer, as they are convinced she knows everything. Even more so when they learn that she recorded the dreadful thing with her phone. Who can help Summer? Will it be Dex, her boss? Will it be Trina, her unhappy sister? Will it be Grady, Trina’s new boyfriend (who counts Lance among his clients, of course). Will it be Franco, who has smoldering down to a science? Bah, Summer doesn’t need any of those people, because she’s a strong, independent young woman.

Happily for all, the car crash and coma didn’t grant Summer any powers other than the ability to see into the future at odd moments. It’s not as if she has super strength or insane fighting skills. She remains a somewhat normal person throughout. Another credit to the film: Shepherd and Christian make for fine foils, even if they don’t share a lot of screen time. The characters are well defined and not too over the top. Christian as Lance has gallons of charisma to spare, and he definitely makes this movie watchable.

So, despite the fact that the plot hinges on a Macguffin (the clairvoyance thing), Last Seen in Idaho is a pretty good movie. It’s not terrible. If you rent it thinking you’ll get a mashup of a Lifetime Original Movie and something you’d have seen on USA Network in the 1990s, you’ll be satisfied. The plot holes are relatively minor and do not affect the enjoyment of the film. All told, a fine effort. 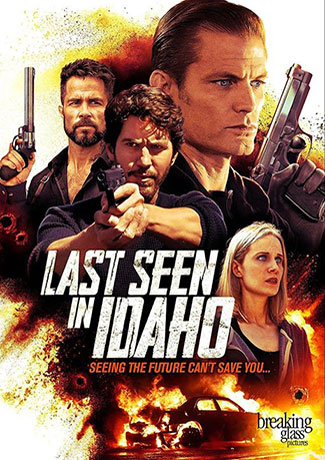