Me Before You belongs to a much-maligned genre. It features young adults and is based on a novel aimed at that demographic (like “The Fault in Our Stars” and “Twilight”); its focus is a young woman’s experience of a complicated relationship with her fellow generic archetype (like “The Notebook” and “Dear John”); the relationship features some highly emotional moments (like “The Fault in Our Stars” and “The Notebook”); it manipulates tears out of its audience through heartbreaking scenarios and pouring on the agony (like, you get the idea). It therefore fits the bill for a modern day weepie, a genre that is disparaged for rather dubious reasons.

Criticized as “women’s cinema” or (worse) for “girls,” the weepie has a reputation for frivolity, excessive emotion and somehow unhealthy manipulation. There are severe problems with the gender attitudes in this view, suggesting that films for women are somehow less worthy of critical attention than other films, presumably for men. Bombastic action films aimed at teenage boys also come in for a lot of stick, but that criticism is closely tied to age — either boys grow out of bombastic action films or the adult men who watch them have failed to mature. The idea that weepies are a lower genre aimed at women of any age is another way for patriarchal hegemony to demean women and characterize them as the weaker sex, open to emotional manipulation whereas men are intellectual, resistant and wise (provided they grow up and stop enjoying robots and superheroes).

When subjected to analysis, these views are rapidly exposed as utter excrement. Films aimed at an ostensibly “male” audience are also highly manipulative, as are potentially “intellectual” films. Furthermore, men can cry at tragic romances as well, as I can wholeheartedly and unashamedly report was the case during my viewing of Me Before You. But I also laughed, as Thea Sharrock’s film of Jojo Moyes’ screenplay balances wit and warmth with the worries and whimpers. All films are manipulative, and the question is whether a film is effective and not exploitative. When a character is disabled — Will Traynor (Sam Claflin, “The Hunger Games: Mockingjay – Part 2”) is paralyzed below the neck — exploitation is a genuine risk: Are we being presented with a disabled character solely to feel sorry for them? Furthermore, there are consistent problems with the depiction of disabled people on screen, such as presenting their disability as an insurmountable burden to a meaningful life, or having a person with a disability played by an able-bodied actor. Regrettably, Me Before You does not address these problems and in some ways contributes to them.

Problems of representation aside, Me Before You does work as an emotional drama. The film does not simply present Will’s situation as tragic because he is paralyzed, but ensures that the viewer’s sympathy is engendered by his constant mental anguish, anguish that the viewer can at least sympathize wit even if they have no comparable experience. Crucially, we sympathize with him at the same rate as Lou Clark (Emilia Clarke, “Terminator Genisys”). As Lou learns more about Will, his past and present situations, she and the viewer come to understand his suffering. Clarke therefore carries the dramatic weight of the film, and her engaging performance includes just the right amount of verve and (sorry for using this term) bubbliness. Lou is something of an archetype, an English “rose” who makes a great cup of tea, dresses garishly, loves her family and is loyal to her boyfriend Patrick (Matthew Lewis, “Harry Potter and the Deathly Hallows: Part 2”), despite Patrick’s blatant disregard and de-prioritization of her. But as with Will, there is much more to her than these traits. Her wardrobe especially is a source not only of comedic delight, but touching personal history and narrative development; a pair of tights serves provides a particular highlight.

Other archetypal features are the class barriers between Lou and Will. He comes from immense wealth and his family have built a fully equipped annex for him; she has a working class background and lives with three generations in one house. There is even a reference to contemporary economics as her father is out of work and early in the film she is made redundant because the quaint café where she initially works closes down. Whereas the recent “Testament of Youth” was stodgy and stilted in its Englishness, Me Before You makes a virtue of its national identity, with a quirky, self-deprecating humor that provides a powerful contrast to the heart-rending moments. Sharrock paces the film carefully, allowing time for the supporting cast to breathe, including Janet McTeer (“Insurgent”) and Charles Dance (“Child 44”) as Will’s parents Camilla and Stephen, Jenna Coleman (“Doctor Who” TV series) as Lou’s sister Treena and a great turn from Stephen Peacocke (“Hercules”) as Will’s (bewilderingly Antipodean) physical therapist Nathan. The Director of Photography, Remi Adefarasin, lenses the film in seemingly natural light, especially the gorgeous Pembrokeshire countryside and Pembroke Castle (part of the Traynor estate, of course). The charming English environment and winning characters create a sense of place and community where the viewer can feel at home, or at least enjoy their visit. As a result, as events become increasingly unhappy, the viewer continues with the characters in this comfortable environment, able to feel and indeed share their pain.

In addition, and despite its problems with portraying disability, Me Before You is encouraging from a gender perspective. Both writer and director are women, and the central narrative arc is of a woman whose identity is defined neither by relationship nor work. Both these aspects are central to the film, but Me Before You also acknowledges wider horizons and the difficulties of social constraints. While there are aspects of the film that are problematic, there is also much to enjoy. Just remember your tissues. 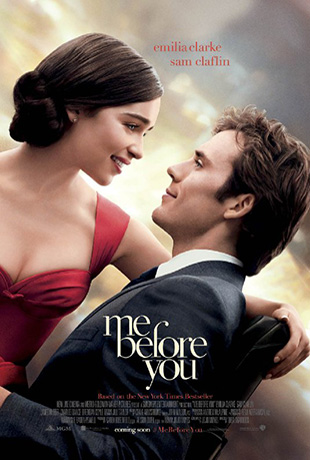