The one useful purpose that Night of Something Strange may provide is as an interesting counterpoint to another horror contemporary, “WTF!.” Both are modern takes on the 1970s and 1980s teen slasher model, and both depict shallow, reprehensible heroes getting slaughtered. But while “WTF!” succeeds as a critique of its protagonists’ vacuity, Night of Something Strange seems to want us to identify with these kids’ antics; to laugh with them.

Let’s quickly get the positives out of the way. The cinematography is occasionally okay, with some fluid tracking shots and the odd Dutch angle; and there’s some lighting which may have necessitated a moment’s thought, giving the film a professional sheen that belies its budget. And . . . we’re done.

The monster of the movie is a sexually transmitted infection which turns folks into zombies. It begins with Cornelius (Wayne W. Johnson, “Empire State of the Dead”). Within the first ten minutes, we’re witness to necrophilia, zombie transformation, rape, and the cannibalization of a uterus. But hey, it’s all done for laughs!

Menace established, we are then introduced to a group of teenage friends (who, as is typical in bad horror scripts, act more like incompatible strangers). They’re on a road trip to the beach, or something. There’s smug white boy Freddy (Michael Merchant, “She Kills”); overweight doofus Jason (John Walsh); sassy blonde Carrie (Toni Ann Gambale); and sassy brunette Christine (Rebecca C. Kasek, “Slade Collins and the Tree of Life”). Just by looking at the character names, one can see the basic level of homage the filmmakers are targeting here. Oh yes, I almost forgot Brooklyn (Tarrence Taylor, “White Boy Brown”), a black stoner stereotype who doesn’t need to be in the film.

Also on the road are Dirk (Trey Harrison, “Faux Paws”) and Pam (Nicola Fiore, “The Haunting of Mia Moss”), the supposed cool couple. He’s a military drop-out and she’s a bimbo. Dirk doesn’t trust her and he fantasizes about violently killing her. This is the guy who, by the end, we’re supposed to hero-worship.

None of the actors can act.

Along the way the teens bump into various southern stereotypes — dumb truckers, and chain-smoking gas station staff devoid of Customer Service training — before arriving at a motel. This is where the coitus begins and the fluids (of all kinds) start flowing.

Plunging deep into the scatological, Night of Something Strange is a film of ecstatic bad taste. Ask yourself if any of the following sounds funny: A guy defecating in another’s face while he sleeps; a woman kicking another in the vagina and losing a shoe; a case of mistaken identity which results in a guy licking out another and raping him, twice, in real time. But hey, at least these are extreme examples. More wearying is the consistency of the humor throughout.

The cover art implies ‘80s nostalgia, and on the surface the idea of a frat-pack comedy-horror about an evil STD isn’t a bad one. But the appeal of movies like “Weird Science,” “Vamp” or “Night of the Creeps” was precisely their quaintness; the implicit knowledge that none of these delusional dorks were actually getting any. Night of Something Strange seems contemptuous of its touchstones, owing more to the rapiest parts of “Street Trash” or “Brain Damage,” except without the social commentary.

Moreover, Night of Something Strange fails to function as a horror parody. It doesn’t have the subversive smarts to get close to, say, “Tucker & Dale vs Evil,” and frankly it’s too mean-spirited. Instead, the script sounds like the first draft of a particularly infantile 14-year-old boy who’s just seen “Mallrats” for the first time. “Wanna lick my balls?” says a motel attendant. The guests recoil. “Wanna wakeup call?” he repeats. You can practically hear Beavis and Butthead chuckling.

Then, to top it all off, it can’t even get the modern synonym-style comedy right. When Freddy says his bloodline has “more testosterone than the average Greek god or gorilla,” it’s just one example of the relentless tirade of tone-deaf dialogue, which arrives with not a hint of comic timing. That’s before we get to the interminable flirting scene between Dirk and Christine, taking in everything from vending machines to the virtues of cats. Even the so-called “serious” dialogue is aimless and subtext-free.

'Movie Review: Night of Something Strange (2016)' has no comments 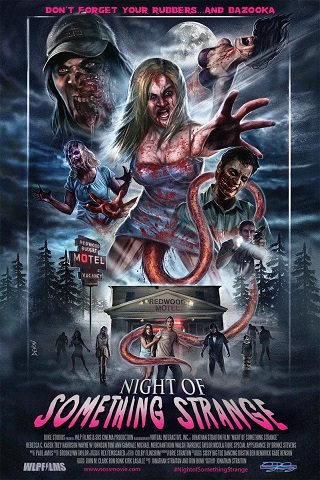