There is certainly something to be said for the wonderful claymation and quirky British comedy of The Pirates! Band Of Misfits, the by-product of such other animated films as “Flushed Away,” “Chicken Run” and the “Wallace and Gromit” series. I have always appreciated this technique because it shows that the old-style way of making this type of movie is still popular, and everything has not been swamped by green screens and computer-enhancement.

However, despite my love of this craft, I would have liked the misadventures of this incompetent band of scalawags to have been trimmed about 20 minutes and the completely unnecessary 3D effects eliminated.

Directed by Peter Lord (“Chicken Run”) and Jeff Newitt, and written by Gideon Defoe, The Pirates! Band Of Misfits offers up a group of bumbling simpleton buccaneers (an effeminate first officer, an albino, a girl in disguise and a gentle giant — voiced by Al Roker) led by the single worst raider of all-time, the blandly-named Pirate Captain (voice of Hugh Grant, “Did You Hear About the Morgans?,” “Music and Lyrics”). Captain has sought to become the Pirate of the Year for several decades, but always seems to come up short of that goal.

And that’s because he basically has no idea how to rob and plunder ships or harbors. It’s not for a lack of trying, though — he and his misfits enthusiastically (and mistakenly) board plague, ghost and medical ships, and even a boat which is taking children on a field trip. All he gets for these efforts is humiliation and degradation. Even his “wanted” poster (rewards of “12 cents and a free pen” are offered) mock his amazing ineptness. Meanwhile, other, better pirates — with more substantial bounties — such as Black Bellemy (voice of Jeremy Piven, “The Goods: Live Hard, Sell Hard,” “Entourage” TV series), Cutless Liz (voice of Salma Hayek, “Puss in Boots,” “Grown Ups”) and Peg Leg Hastings (voice of Lenny Henry, “French and Saunders” British TV series), are bringing in the booty (gold and other treasure) which is likely to win one of them the Pirate of the Year honors yet again. 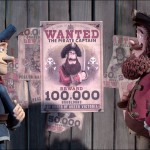 But after taking over the HMS Beagle and capturing a dopey, lovesick and conniving Charles Darwin (voice of David Tennant, “How to Train Your Dragon,” the remake of “Fright Night”), Captain is informed that his bird, Polly, which he had always thought was a parrot, is actually a thought-to-be-extinct Dodo. Darwin persuades him to present the rare animal to the Royal Science Society in London, a sure thing to claim the big prize. A win is a win, so Captain agrees, despite the suspicion of his first officer (voice of Martin Freeman, “The Hitchhiker’s Guide to the Galaxy”).

Nothing, however, is as simple as it seems or should be. Darwin, with his “man-panzee” butler, Mr. Bobo (who uses title cards to express his often-hilarious dialogue), has other plans for the Dodo. So does the pirate-hating, blubberous, evil despot Queen Victoria (voice of Imelda Staunton, “Arthur Christmas,” “Vera Drake”). Both, infinitely more cunning than Captain, manage to get him to break pirate code and lose the respect of his crew as well as the entire pirate community.

So for the rest of the running time of The Pirates! Band Of Misfits, questions are posed: Will Captain ever get back into the good graces of his peers? Will the Captain ever live up to his potential? Can the queen go on a diet? Will Charles Darwin ever discover the principal of evolution, write “The Origin of Species” or get a girlfriend?

The answers to these and other inquiries are delivered in offbeat ways. And while the film is made for children, the quips during the adventure — many of the British upper-class twit variety — come fast and furious and will mostly fly way over their heads. Parents, however, should appreciate the writing and nuances — look for some clever scenes featuring characters like Jane Austin, Thomas Edison, Alexander Graham Bell and John Merrick, and read some humorous road and shop signs in and around London and the various ports of call, including the pirate haven of Blood Island — but may become bored when the movie slows to a crawl near the middle.

This ultimately leads to a middle-of-the-road feature. For the most part The Pirates! Band Of Misfits is visually appealing (although the 3D version adds nothing to the adventure other than an inflated ticket price) and the adventure is rife with laughs. It’s unfortunate, one has to be quick as a cannon shot to appreciate the puns (and more unfortunate that kids — even if they could process the quick-shot humor — will not fully understand what their parents are chuckling about). 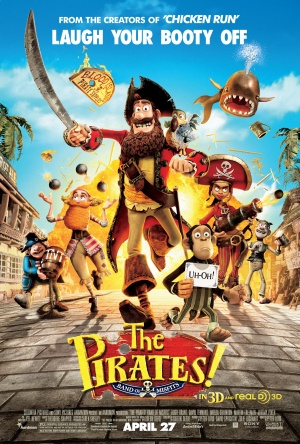