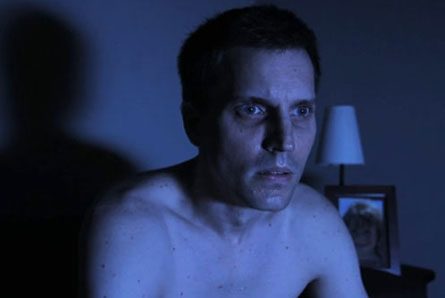 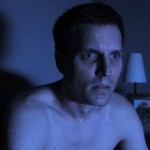 From the mind of a man calling himself Elias comes Gut, a “psychological” horror film in which a video depicting gruesome murders brings two men together while at the same time causing tensions that threatens to tear them apart. Sadly though, the word psychological is in quotes because the only thing this movie did was to want me mentally conscious enough to fight the urge to turn it off. In its hour and a half run time, it delivers just about nothing other than a predictable, extremely amateur toned torture-porn thriller anchored by sub-subpar acting.

Set in an urban neighborhood, Tom (Jason Vail, “Dead Collections”) is a troubled man trying to get a grip on his boring life with a less-than-rewarding marriage. Going through the motions, he’s trapped in a workplace where nothing is gratifying to him and he must tolerate the likes of his (seemingly) lifelong friend Dan (Nicholas Wilder, “Flogging Margaret”). So when Tom looks to escape his mundane life and move away with his family, the two buds ultimately drift apart. But bringing them back together is a macabre interest — the two meet regularly to watch awfully real looking videos of torturous murders where women are stripped and sliced open (as the title, Gut, would suggest).

Tom soon wants no part in watching such vile imagery and tells Dan to destroy the tapes and forget about whatever strange feelings they had while watching the videos. Dan, however, only seems happy on days when he has new “material” for his buddy; Tom, on the other hand, develops an increasing hatred for his sadistic, sociopathic friend on those days. The film takes hold when Tom urges his wife to refrain from seeing Dan after a diner waitress Dan was seeing doesn’t turn up and they receive a video of her death. Is there an outside figure with an intricate plot to blackmail the two? Does Dan have the makeup of a crafty serial killer or is Tom secretly playing off his innocence with a quiet urge to hack up women in his spare time . . .?

What that payoff is is immaterial. It is quite literally a blatant struggle to make it through to this part of the movie, let alone to the ending.

But while the vast majority of Gut does not impress (unless watching a gloved hand perversely reach into the torso to play with the innards of three or four naked, female victims is your kind of horror highlight), there were a few select moments I considered genuinely creepy. These mostly came during vivid dream sequences in which the cameras would pan from a nervous Tom to a flashing image of blood seeping down yet another victim. They’re not overly original but they were nonetheless effective. I also appreciated Elias’ attempt to capture the emotional tension between the two men. He was, unfortunately, at the mercy of his leads — had they been stronger at behavioral emoting (or acting, in general), viewers would have gained a better understanding of the fragile psyches of the characters and perhaps cared about their outcome.

Even more damning for Gut is that not even the superfluous nudity (including male genitalia, horror-buff ladies) or rivers of gore — proud staples of the genre — are captured well enough to shield from the audience production weaknesses. One is therefore better off trying to resleep their worst nightmares than stay awake through this one. 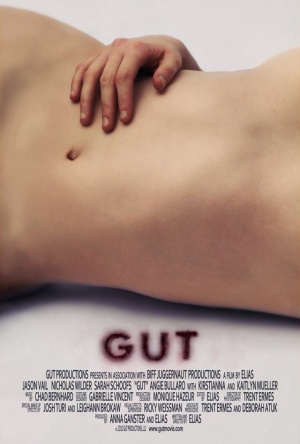