Paul Verhoeven is back with more scratchy sexual politics, darkly comic innuendos, and harshly nasty violence. First things first, the most joyous part of that sentence is the beginning. Paul Verhoeven is back. Not back to Hollywood, of course, which he left nearly 17 years ago after the dismal response to his schlocky invisibility thriller “Hollow Man,” and not to Dutch cinema, where he eventually retreated to make the solid WWII thriller “Black Book,” but still back and getting in touch with his roots.

Verhoeven’s new vehicle is Elle, a French thriller about icy CEO Michèle Leblanc (Isabelle Huppert, “Amour”), who is horrifically raped by a masked burglar in the opening scene of the movie. Then she gets back up, dusts herself off, and goes about her day. Michelle is certainly fazed by the experience, but she has no desire to approach the police and instead begins a casual investigation of her own.

This creates two mystery plot strands, one focused on why Michèle is the way she is and the other an attempt to unmask her attacker. Two mysteries for the price of one, especially a classic whodunit intertwined with a more personal exploration, sounds like a juicy combo, but either Verhoeven has been out of the game too long or he’s only partially committed to seeking more than mere twist reveals, because these mysteries are clunky contraptions that cripple Michèle’s arc.

Figuring out who the rapist is among a host of wily suspects is hardly any more difficult than solving a Scooby Doo caper, but Verhoeven and screenwriter David Birke continually insist on dedicating a chunk of screentime to a silly campaign of misdirection where so much evidence is stacked so loftily against an employee in Michèle’s video game company that anyone with even a cursory knowledge of mystery storytelling couldn’t possibly fall for the trick.

So, is the rapist reveal intended to be entirely obvious? This seems a strange approach if true, since Huppert creates such a captivating portrait of a mysterious woman that we hardly need so much narrative space wasted on developing such a blatant red herring. Verhoeven does implant a tinge of irony for anyone (presumably everyone) who can discern the identity of the attacker relatively early and that at least shuffles Elle inside the borders of a darkly comic zone that Verhoeven’s movies have often occupied.

Still, the mystery is a bust and dropping the preposterous attempts to obfuscate the truth would make for a tighter, more engaging, and arguably even more daring spin on the thriller genre. A traditional three-act mystery handled in a simple, straightforward fashion requires a sharp reveal to justify its use of conventions and Elle is ever reluctant to admit that its whodunit element is softly transparent.

The second mystery strand concerned with Michèle’s backstory is far more interesting and the initial pieces of hinted information are teased out intriguingly, but then the details are suddenly delivered in large exposition dumps at two different points in the movie. Michèle’s dad has a dark past and while I always appreciate filmmakers finding alternatives to flashbacks for distributing backstories, having the protagonist randomly play a TV documentary that quickly summarizes the facts for us feels much more clumsy than clever.

Whatever blanks are left after that scene are later filled in by Michèle, who opens up so conveniently and almost randomly that she might as well deliver her monologue directly to the camera. These missteps all feel rather fixable and yet their presence generates a sense of rocky narration that repels the slickly smooth Euro-thriller style that Verhoeven is grasping for.

The man who previously lambasted 80s corporate America with a cyborg cop (“RoboCop”) and WWII-era fascist propaganda with bug-squashing space soldiers (“Starship Troopers”) has long since been a very smart and effective storyteller, but the broad narrative strokes of Elle are too familiar, while its finer-tipped details around human interaction are more successful. So even though solving the mystery of Michèle’s attacker is overly simple, at least Verhoeven and Birke saddle their heroine with some offbeat supporting characters to add a slight layer of unpredictability.

Michèle’s son and ex-husband add some flavor to the movie, but are most valuable in how they further develop our understanding of the woman at the story’s center, like how Michèle aims to protect her son without coddling him and how she remains friends with her ex-husband while taking spiteful jabs at him. There’s definitely some fun being had at the expense of the male ego here and Huppert is the perfect actress to exploit that. She’s always believable in all situations, which allows even an awkward script to lay the groundwork for a compelling character. Huppert is certainly the best part of the movie even if it’s the director who steals most of my attention here.

At his best, Verhoeven has always compartmentalized his inspirations rather uniquely, so he creatively crafts a fresh experience that stands on its own, but Elle bears a little too much resemblance to its cinematic influences. Verhoeven seems to be aping regular Huppert collaborator Michael Haneke a bit here, although the somewhat trashy plot doesn’t blend well with the style, and shades of Abel Ferrera’s 80s cult classic “Ms. 45” are visible as well, but it’s Olivier Assayas’ “Demonlover” with which Verhoeven’s latest shares the most cinematic DNA.

Assayas’ 2002 thriller about the dark, dangerous intersection between sexual and business politics is a more sinuous, intense, and convoluted thriller from a director who can’t be pinned down, so it’s an unfavorable comparison for Elle. Of course, Verhoeven’s picture is very different from Assayas’ in many ways, but he’s still in territory that several great filmmakers have already explored more memorably than he does here.

But hey, Verhoeven’s back! He’s always interesting to discuss and consider, even when absence has dulled his instincts. This master’s rusty return lacks the raunchy rebellion and saucy satire of his best work, yet still flickers with a sense of celebration that the filming Dutchman is on the tips of tongues again, even if perched precariously. 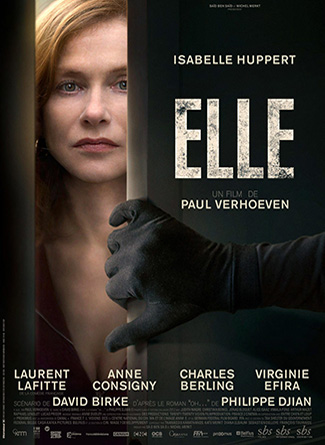