A found footage slasher which doesn’t add anything to a highly variable subgenre sounds eminently skippable, but Altar is at least short and sharp, reasonably gripping, and has good characterization.

A slightly unconvincing and unnecessary prologue presents a married couple spending their wedding night in a remote hotel. For some reason they choose to go on a creepy midnight walk in the snow. It doesn’t end well. And actually, I’m not sure it makes sense once you’ve seen the whole movie.

Jump to the main story, and we meet siblings Bo (Jesse Parr) and older sister Maisy (Stefanie Estes, “Bethany”) as they prepare for a camping trip. We gather that their father is dead, and that Bo is struggling with agonizing anxiety and shyness. Maisy, clearly working hard to be a ray of sunshine, reckons the vacation will help him gain confidence.

After a creepy encounter with a charming local named Ripper (Michael Wainwright, “Lake of Shadows”) — he has a penchant for greeting strangers whilst clasping an axe — the youngsters inevitably end up lost in the woods. Thankfully, they happen upon a small campsite, run by the sinisterly friendly Dave (Master Dave Johnson, “Roadside Massacre”). Another midnight walk later (what is this temptation to go rambling in unknown woods at night?) and our “Warrior Falcons” stumble upon a strange altar.

Obviously, bloody mayhem ensues. However, it is late coming, and there isn’t a whole lot of imagination or clarity to the death scenes. This is in part self-inflicted, because the nature of the monster means that ambiguity is necessary.

The ongoing found footage problem is the struggle to justify the form. In this case, Bo is an aspiring filmmaker. So while we get the usual tiresome scenes of people insisting he “shut that thing off,” the presence of the camera at least makes some kind of sense: Bo is painfully withdrawn, and the lens is both a means of defense and empowerment.

It is strangely refreshing to see horror movie kids getting along. There are no contrived conflicts, and the rivalries are implicit, bubbling over only when straits become dire. It’s just a pity that the character setups often fail to pay off. Pam begins as an amusingly brainless bimbo, but is then sidelined for the rest of the movie. And subplots involving two couples with a romantic history add texture, but fail to arrive at any kind of destination.

Perhaps Altar is too efficient. The setup is slow and eerie and intricate. Then, as soon as the satisfyingly nasty twist is revealed, we’re hurtling toward the end credits quicker than you can swing a hunting knife.

The strongest performances are from Parr and Estes. There’s a genuine sibling warmth between Bo and Maisy. “We’re smarter than the people in the scary movies,” she insists — a fantastic line for us, the audience, partly because it’s true and partly because it will turn out to be horribly ironic.

The supporting characters are served well also. Okay, Ravi is a bit of a bore in the level-headed nice guy role, but Asher and Pam have some great moments playing the disruptors of the group. Asher is a beefcake with the mind of a teenage boy, while Pam is actually his teenage ex-student. Early on, she gets some amusing lines; at one point she remarks that camping is “like paying to be homeless.”

With fun characters, an above-average script and a brief running time of 84 minutes, Altar is a solid found footage movie. But its loose ends, unmemorable deaths and its dearth of fresh ideas ultimately render it an also-ran of the horror family. 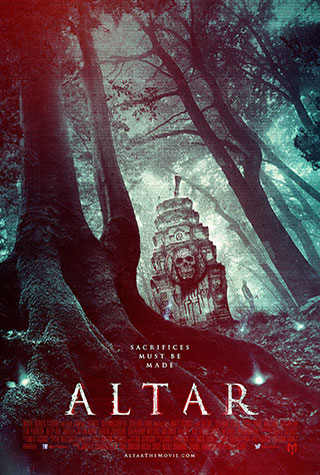