Catherine Zeta-Jones has undoubtedly crossed that threshold that separates the young from the old — no matter how many pilates classes she takes or face pulls she has performed. So it’s no wonder the spin on her latest romantic comedy The Rebound is that of an older woman hooking up with a much, much younger guy. It’s the natural progression of things before she gets penciled into nothing but old spinster roles.

To her credit though, she still carries herself damn well, so the concept of a young guy sniffing and prodding around her skirt isn’t totally out of the realm of possibility. She takes on the role of Sandy, a recently separated mother of two now encumbered with trying to find a job in the big mean city. To help, she needs a babysitter and, as luck would have it, working below her apartment in the coffee shop is a 25-year old good looking, college educated guy wasting away at a dead end job and feeling generally shitty about the cards dealt to him. This guy, named Aram Finklestein; yes, you heard it right — Aram Finklestein, is played by Justin Bartha.

As one would, or at least should, expect The Rebound roughly follows the same formula as every other romantic comedy that’s come before it: Girl sees guy as friend only; guy “innocently” builds strong relationship with girl and her family; girl realizes what she’s been looking for has been with her the whole time; guy and girl hook up; conflict erupts between couple; cue resolution — good or bad — at end of movie. But all is not lost; the film does have its moments. And most of them come about from Justin Bartha.

He takes his reserved, goofy but cute persona he’s perfected in many of his supporting roles (“National Treasure: Book of Secrets,” “ Failure to Launch“) and scaled it up to make a likable character that doesn’t make you want to puke from all his niceness. It’s a welcome change to see in a lead performance as so many of male leads in this genre nowadays are charming, cocky douchebags (think Matthew McConaughey). Bartha, if he plays his cards right can be the new Hugh Grant.

Zeta-Jones too, does an adequate job in her role as the cradle-robbing business woman. She appears comfortable in her character’s skin; I only wish writer/director Bart Freundlich made that skin more than surface deep. I found her cold and calculating, and exuding little warmth. After all, who hands over the keys to their apartment and their two children to a complete stranger just so they can go out on a blind date?

I should also think more could have been done with the ending of The Rebound than what was offered up — the feel good montage spanning four (or maybe it was five) years of time was completely out of place and thoroughly sappy. That notwithstanding, the movie is a cute middle of the road rom-com good for a late night rental with your significant other. 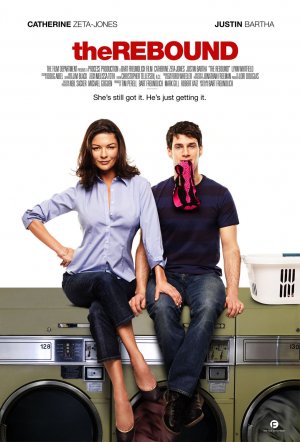