Everyone, including myself, likes a good romantic comedy every now and then. After watching a few of the trailers for Failure To Launch, I figured it was that time.

Failure To Launch is basically like all the romantic comedies before it. Good looking man (this time played by Matthew McConaughey) has a phobia or quirk (this time: 30-something year old, living with parents) about him that makes it difficult for him to meet the right lady (this time played by Sarah Jessica Parker) — yet in the end they manage to make it work. As in most cases this tried and true method works — as it does here.

Why does it work? The main reason is the movie doesn’t take itself too seriously. Many movies in this genre can, at times, actually believe the shit they’re selling. That’s not the case with Failure To Launch. Mixed into the love story, are some very stupid parts, that the writers try to make sense of in the end. McConaughey gets attacked by a chipmunk and a dolphin and some strange lizard while rock climbing. Only at the end do we come to find out it was because he was out of harmony with nature, but the scenes themselves were quite stupid. Another overwhelming reason for success is that the movie stars two very good looking actors. Matthew McConaughey has to be at the top of People Magazine’s top 10 good looking people. And he generally seems likable and friendly — maybe it’s his southern roots. Sarah Jessica Parker, she’s an enigma. One helluva of a fantastic body — but a face that makes you want to turn your eyes away. Almost as if God put a horse head on the body of a Playmate. Yet, her friendly persona makes her a great fit for this kind of movie. Also, sprinkled throughout the movie are some very funny moments. Terry Bradshaw roaming around naked through his house will give you some mixed emotions. Zooey Deschanel, Parker’s roommate, steals a great many scenes by offsetting Parker’s exuberance with her character’s melodramatic self-loathing.

All said, if you need a moment to just have a relaxing time, watch some good looking folks have fun, then Failure To Launch is for you. 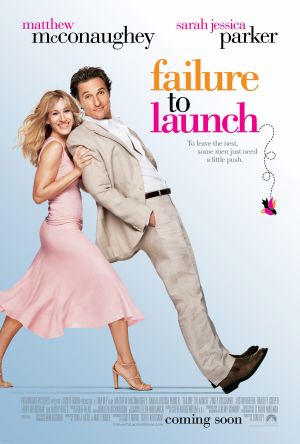