Hmmm . . . Angelina Jolie and Brad Pitt in the same movie. Arguably, the two best looking actors in the world. Initial thoughts? Mr. & Mrs. Smith has to suck. When the media focuses on the couple after filming the movie goes downhill . . . remember that mess “Gigli?” So needless to say, I didn’t go into this movie with high hopes.

The verdict? I was pleasantly surprised. I wasn’t entirely sure what to expect. The plot of the movie follows a bored married couple who are both, unbeknownst to one another, top assassins, who are each, each others’ mark. Definitely an interesting idea . . . something, Hollywood has been lacking for years.

One of my early expectations was this movie wasn’t going to make any sense. There wouldn’t be any thrills or engaging dialogue (after all, Brad Pitt stars). This was where the movie exceeded my presumptions. Mr. & Mrs. Smith is strewn with action sequences. The car chase scene is very well put together and the husband and wife altercation in the house is very entertaining, to say the least. But best of all, the movie has some very funny, pointed quotes. The give and take between Pitt and Jolie is masterful. Almost as good Abbott and Costello (rather far from here, but said to just make a point). My wife and I looked at each and laughed as both Mr. & Mrs. Smith sit and talk to a marriage counselor at the beginning of the movie. If you’re married for five or six years (as in the movie) you’ll get the goosebumps!

And even more likable is the casting of Vince Vaughn as Eddie, Pitts’ partner. I don’t know about you, but Vince Vaughn is one funny motherfucker. If you don’t know his work, I strongly suggest you see a few of his flicks like: “Be Cool,” “Anchorman: The Legend of Ron Burgundy,” “Dodgeball: A True Underdog Story” and “Old School.” This guy has awesome comic delivery.

But alas, there is always a downside. I found it awfully hard to believe, that they would be able to conceal their professions from one another. They literally have an ammunition dump scattered throughout the house. And I’d love to know the contractors who built the super-secret weapon stashes too! Unbelievable. Also, there should have been more gratuitous scenes of Ms. Jolie in more revealing outfits (the wife would argue the same for Mr. Pitt). But for the sake of Mr. & Mrs. Smith these few anomalies don’t detract much from the overall picture. 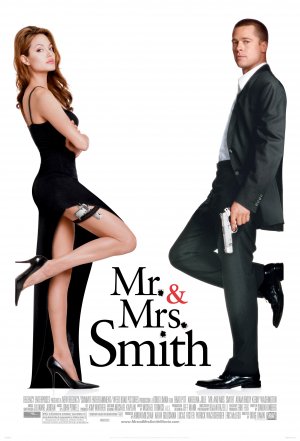