Once again, Hollywood has decided to bring the masses another cute and cuddly CGI feature film with, you guessed it, animals! Who woulda thunk that? As has been said in previous reviews, Hollywood sticks to a format that works. Therefore, Madagascar should be no different from “Shrek” or “Robots“. . .

Am I correct? Basically. Madagascar chronicles a zebra (voiced by Chris Rock), a lion (voiced by Ben Stiller), a giraffe (voiced by David Schwimmer) and a hippo (voiced by Jada Pinkett Smith) as they travel, by accident, from Central Park to Madagascar. As is the usual case in the instances of these types of movies, the characters are overly cute and unimposing. After all the movie has to draw the kids into the theater. The movie is vivid and brightly colored, again to attract the young ones. And as always the movie is littered with adult-themed humor. Gotta give something to the parents who, it is safe to say, are only sitting through the movie for their children’s sake.

Madagascar separates itself from previous CGI works in that the dialogue seems especially pointed at the parents. Where typically there may a few fart jokes or topical event humor in an animated movie, the exact opposite can be said about Madagascar. The giraffe is a pill popping hypochondriac. The lion is an egotistical douchebag. The penguins (which steal the movie), are plotting, diabolical characters who abuse humans and dare I say, say the word ‘suck’!

Does it work? Mostly. Obviously children are going to like it, even if they have no idea what the hell is going on. Adults should have a good time too. The next CGI features, I predict, will further cater to the adult audiences. Madagascar is only scratching the surface. 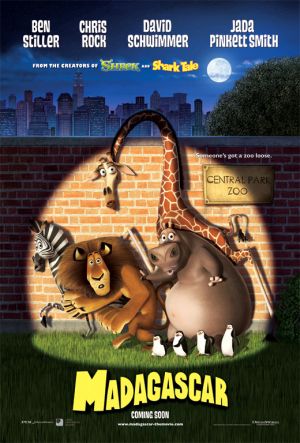