I like animation. Every Saturday I watch my morning cartoons (on the WB of all places!) Late at night I watch Cartoon Network to watch the crazy-ass anime imports. I am a true believer that watching this shit will keep you young at heart. Based on this I looked forward to watching the latest Hollywood CGI creation: Robots.

The movie chronicles Rodney Copperbottom, a young robot, determined to make his way to the big Robot City to follow his dream of being an inventor. A simple enough premise that could be pulled off with the right blend of animation, inventive backdrops, a high-powered cast to provide voices and adult themed humor.

On most of these four points the movie hits a triple (baseball lingo for those confused). The animation in this movie is top-notch. Everything is fluid and well choreographed. Colors are vibrant and the characters (both main and incidental) are interestingly designed.

The backdrop of the movie is set in Rivit Town and Robot City. Robot City is a well thought out location. My only pet peeve is, if this is a world of robots and supercomputers, then why is the mass transit system based off of pulleys, rubber bands and other assorted 19th century shit?

Lastly, Robots does well to give the parents a good dose of adult humor along the way. My favorite? I’m a sucker for fart jokes. Two minutes of the movie is dedicated to farts and/or fart sounds. I can laugh all day long at farts. There’s also a good amount of urban references dashed here and there. Nothing too racy (that’s what killed “Shark Tale”), it’s got just the right mixture for all audiences.

Of course the movie has additional flaws. Why is there a need for inventors? If his is a society filled with robots, machines and computers…why wouldn’t everything be created already? Why isn’t there any robots specializing in fixing older robots? There are stores that sell parts, but no one to actually fix anything!

The movie is worth the 91 minutes it requires you to sit down to watch it. It’s not the top animated flick out there (“Finding Nemo” and “The Incredibles” are better to just name a few), but it is a top runner of tier two flicks. Nothing wrong with winning the NIT if you can’t make the big dance (NCAA basketball reference, asshole). 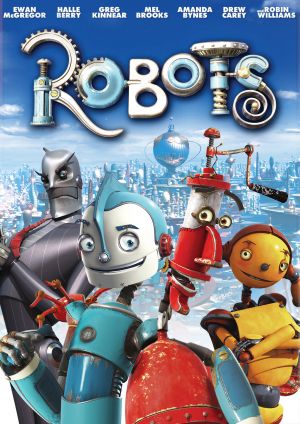