“Just another Wednesday,” the visibly fatigued nurse exclaims as she tends to a bullet wound of one of the guests of her dimly lit, blood spattered hotel for crooks. The only rules of the underground institution: No guns, no cops, and no killing of other guests. Throughout the film’s jaunting plot we watch thieves, assassins and leaders of crime syndicates break these rules for their own intricate and sometimes unexplained reasons. These gaps give Hotel Artemis an underlying theme of mystery that subtly compliments the films’ battered and bruised characters, but often leaves the audience in a curious smog.

Established action-thriller screenwriter Drew Pearce, best known for penning the scripts for action blockbusters such as “Iron Man 3” and “Mission Impossible: Rogue Nation” makes his directorial debut with this dystopian actioner that boasts a cast as talented as a first time director could truly ask for. The film stars Jodie Foster (“Elysium”) as Jean Thomas, also known as “The Nurse,” who is the operator of the titular hotel that houses criminals in a futuristic Los Angeles that is smothered in riots and apocalyptic chaos. Thomas is joined by her assistant/enforcer Everest (a towering Dave Bautista, “Blade Runner 2049”) and together the two attempt to operate the hotel with a degree of professionalism that lasts about as long as you could imagine (hint: Not so long).

At a staggering pace the hotel is swarmed with criminals seeking trustworthy refuge, their current states ranging from mildly incapacitated to seconds from death. Appropriately Thomas gives the criminals aliases inspired by the claustrophobic mindset of the dangerous streets of L.A. and the underlying pressure to escape. Throughout the film, the hotels guests express genuine interest in escaping to the paradises of Waikiki or Acapulco, but several of the guests can’t seem to stay away from the grimy hotel despite bullets and bombs pouring into the streets of the city.

The first guest, Waikiki (Sterling K. Brown, “Black Panther”), comes in when his brother, aptly named Honolulu (Brian Tyree Henry, “Irreplaceable You”), is shot while both are trying to pull off an ill-advised heist. Their entrance leads viewers to the driving force of this film, Nurse Thomas, who’s death defying lifestyle seems to be getting to her as she chugs down a glass of scotch as soon as she awakes from her slumber.

However, while Nurse Thomas’ character is visibly used to the traffic the hotel regularly attracts, she isn’t completely stoic to her guests and offers not only shelter, refuge and 3D printed organs, but a shoulder to cry on and often times someone to talk to. It is these interactions, in which backstories and motives are laid out, that offer the most substantial elements of the movie.

Aside from Waikiki and Honolulu, the hotel houses an injured arms dealer named Acapulco (Charlie Day, “Fist Fight”), a wounded crime boss (Jeff Goldblum, “Thor: Ragnarok”) and his son (Zachary Quinto, “Star Trek: Beyond”), and a French assassin (Sofia Boutella, “The Mummy”), among others. Unfortunately, one might find themselves more interested in the events that occur prior to their being admitted than what is actually displayed during the film’s relatively brief 93 minute run time. This is certainly the case for “The Nurse” who internally struggles with her own past until what has created her distant, yet ominous personality, is revealed.

Oddly enough, the film has been marketed as an action crime-thriller, but it is genuinely absent of very much action at all and often it struggles even to be thrilling. Hotel Artemis is more an ambitious, dramatic character piece that finds itself wrapped in the shell of a poorly executed action film that borrows many of its ideas from “John Wick.” Worst is the squandering of an able cast (although they still manage to make these desperate criminals and outcasts seem like vulnerable human beings), especially the superbly talented Jodie Foster who reaches deep to provide a one dimensionally written character with some much-needed flesh.

There is, however, raw entertainment value to Hotel Artemis, even though Pearce stumbles with the identity of his movie. Going in with the right expectations (and a matinee ticket price) will set the stage for one to find something worthwhile in what the film isn’t billed as. 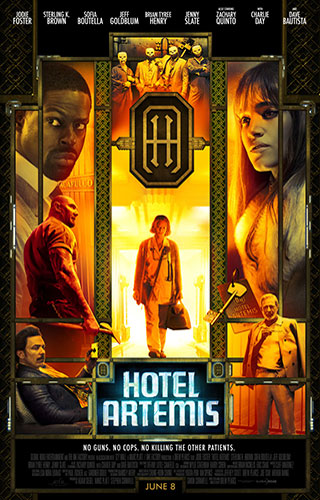