Experiencing cabin fever in the generic home invasion thriller Breaking In is the least of the problems that overcome star/co-producer Gabrielle Union’s project as a periled, butt-kicking mother up against brutish home invaders. Although the premise of a bad-ass caretaker defending her children as desperate criminals look to infiltrate the safety of the home presents an appetizing tension-induced burner, this raggy suspense piece feels like a leftover Lifetime cable TV movie that strangely wandered onto the big screen. And although the beautiful and gritty Union busts some chops in this uneven vanity vehicle meant to showcase a sense of motherly/female empowerment, the audience will feel none of this as Union and her on-screen offspring toil in this recycled, hysterical house of hokum.

Director James McTeigue (“Survivor”) and screenwriter Ryan Engle (“The Commuter”) have experience dabbling in the potboiler/actioner genres so they should know the conventional means to trigger pulsating dramas that resonate. Unfortunately for their collaboration on the thinly veiled edginess of Breaking In, this shoddy showcase merely comes off as predictable and clichéd. The visually stylish, yet static narrative, goes through the arbitrary motions making this Mother’s Day-themed dud not just an irritating intrusion for the movie’s house occupants but for those watching this cursory caper as well.

When a seasoned master criminal dies he leaves behind an ultra-high tech fortress that happens to be housing his treasured $4 million stash. Enter his estranged daughter Shaun Russell (Union, “The Birth of a Nation”). Shaun and her children Jasmine (Ajiona Alexus, “13 Reasons Why” TV series) and Glover (Seth Carr, “Black Panther”) decide to travel to northern Wisconsin to stay at her felon father’s secluded summer home (super-sized and armed with elaborate security devices) before she plans to sell the pricey property. Absent is Shaun’s husband Justin (Jason George, “Kidnap”) which, as you should suspect, plays a crucial role in the deadly proceedings.

As Shaun and her brood enter the posh home they are not aware that sinister company — leader Eddie (Billy Burke, “Lights Out”) and his trio of crooked cohorts Duncan (Richard Cabral, “Paranormal Activity: The Marked Ones”), Sam (Levi Meaden, “Pacific Rim: Uprising”) and Peter (Mark Furze, “Bornless Ones”) — is already scouring the supposedly tightly-secured residence. These unctuous weasels crave that aforementioned cash hidden within and, once they’re aware of Shaun and her kids arriving, they do not want to leave any witnesses behind to spoil their misguided agenda. Naturally eliminating them is easier said than done as the combative mother springs into action like a protective mama bear . . .

Breaking In clumsily purports to shake up the “damsel-in-distress” formula by meshing it with the “don’t mess with this smash-and-bash mother” in an inspired ode to the independence and strength of women. Union ambitiously displays a spirited penchant for kicking some serious tail in her bid to capture the action chick flick market. Unfortunately, this cat-and-mouse game of the reactionary Union outfoxing the deplorable Burke and his fellow ne’er-do-wells mechanically plays to stillborn suspense, although admittedly at first, it is somewhat amusing to watch Union’s rampaging Shaun make mincemeat out of Burke and his band of bad guys.

Needlessly lackluster in its arbitrary spills and thrills, this pseudo-action movie awkwardly channels snippets of “Die Hard,” “Gloria” and “Home Alone” with all the proficiency of a defective monitoring system. Ultimately, Breaking In boorishly fails to break out of norms in the family-in-peril genre and should therefore be left to its own malfunctioning devices. 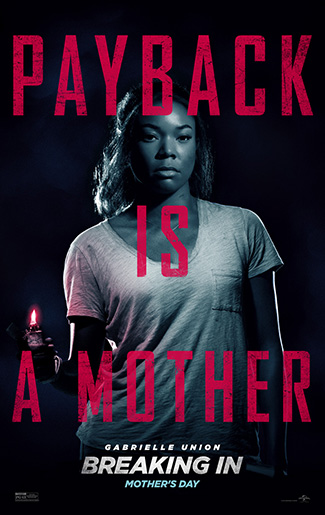