Are You Glad I’m Here is the first feature film directed by Noor Gharzeddine, a Lebanese-American director who appears equally at home in presenting Kirsten (Tess Harrison), a 24-year-old American who has found herself working as an English teacher in Beirut as she does in portraying the middle-class Lebanese family that lives next door. It is this cultural divide between American and Lebanese cultures that seems devised to create the necessary tension to move the story forward. Kirsten, the young millennial, appears to develop a heartfelt, if strained friendship with her neighbor, Nadine (Marwa Khalil, “And Action,” in an admirably nuanced performance). As a struggling Lebanese wife and mother, Nadine presents a commanding contrast to the la-de-da Kristen. Nadine is wise, albeit circumscribed by cultural and social constraints. Kristen is unconstrained, but her freedom seems an artifact of reading the right books and taking the suitable college courses.

Nevertheless, bonding develops between the two women as they relate significant moments in their lives, and a relationship develops based on emotional intimacy that comes close to transcending cultures, backgrounds, and values.

This plot “set-up” is a familiar one in storytelling, in general, and in cinema, in particular. The story has the potential to develop into a conflicted relationship that can arise when two people see a situation from divergent perspectives yet allow enough room for bonding, caring, and solidarity. In Are You Glad I’m Here this relationship is tested when both women argue about how to handle Nadine’s dilemma; she lives with a physically abusive, domineering, and manipulative husband (ironically?) named Pierre (Najeeb Zeitouni). Kristen’s dawning awareness of his behavior leads her to advise Nadine to do what any thoughtful American wife would consider; however, Kristen seems to think the world operates on American time.

As a result, an opportunity to create an exploration of how two women — culturally separated but bonded through a harrowing experience — is not in the cards because of the cliché-ridden presentation of Kristen, who appears so clueless regarding anything about Lebanese society that it seems she’s never even consulted Wikipedia to learn the bare minimum about it. Kristen reveals her naiveté early on when she is shopping in a Lebanese food market and looks at the produce like a Star Trek crew member encountering the comestibles in a distant galaxy. Kristen has so many ‘OMG’ and ‘WTF’ moments as she negotiates her way through everyday life in Beirut that it’s hard to imagine why she chose to teach there in the first place.

Now, it’s possible that Gharzeddine intentionally plays up Kristen’s ethnocentric proclivities as a wry, humorous commentary of an American abroad, or even a meta-critical device to satirize films that portray an American as a redeemer of “other people’s ignorance.” But the trope is hackneyed and it’s not funny or ironic. It also intrudes upon the action of the story once a violent, yet justified act occurs that involves the two women, an incident that brings Nadine’s extended family into the action. And when they arrive, the film gets going — dramatically, emotionally, and aesthetically. When Nadine’s family takes center stage to protect her, the camerawork, lighting, and art direction become liberated. Meanwhile, Kristen is shifted cinematically and symbolically to the background. The contrast between the pre-crisis and post-crisis plot point is so stark that the film seems to metamorphose into another genre. This shift may also be part commentary on conventional films that present an enlightened American as savior. But if it is, the “message” drags down the action.

Samuel Cyrenius Anderson’s screenplay ignores, or rather convolutes, the convention of opening a story in media res. Otherwise, it has a lot going for it, especially the smooth dramatic build-up as Nadine’s family figures out a way to rescue Nadine from her violation of legal and cultural norms. It’s evident that Anderson is a talented writer. It may have been simply a matter that he didn’t trust his own instincts or needed a way to assure the film would be feature length. But filling Kristen’s dialogue with out-of-place feminist references to “The Bell Jar,” Jessica Jones, Virginia Woolf, and Mary Shelley seems simply filler, not fulfilling. It’s fine to create a character that stands out like a sore thumb. But Kristen, as a character, seems to be attached to the wrong hand. The director seems so intent on being innovative that the result is redundancy. Redundancy is relative, though. It might just be that my mind contains a film library that is bursting at the seams. 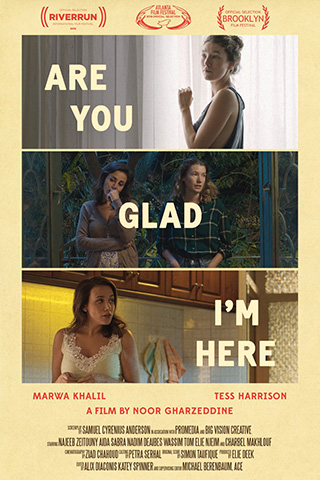