Many moons ago I heard some major rumblings about the upcoming movie Captivity. Apparently, there were a few movie posters plastered around that were extremely shocking and horrifying to passer-bys. This coupled with the fact that the very hot Elisha Cuthbert was starring in it caused a major buzz. Cuthbert being held in compromising positions against her will by a deranged stalker was just too much for my senses to comprehend. Immediately, this movie went on the list of my must see movies of 2007. It’s also times like these that I realize how much of a simpleton I am. The hype never lives up to the expectations.

I can’t really put into words how I feel about Captivity. Pained? Shamed? Anguish? No, those words don’t effectively capture the complete disgust I felt after watching this movie. It was literally like watching a train wreck occur in front of my eyes. The director, Roland Joffé, completely missed the mark he was aiming for. The final product is riddled with plot holes, obvious plot twists, bad acting and absolutely nothing to instill the feeling of fear and loathing that this movie requires.

Let me first preface my actual review by saying, I love the idea of there being a predator living amongst the populace, preying on beautiful woman. Every man has had the power fantasy of taking and controlling either a random woman or one ripped directly from the pages of their desires. I am no different. I really wanted this movie to work. Anyways, now that my demons are laid out onto the table for all to see, I’ll chronicle the points of failure, one by one.

Failure point one: A plot and writing that a four-year old derelict could do better. I’m not really sure about the credentials of the writers (Larry Cohen and Joseph Tura) but it is clear this should not be their day job. The 20 minute buildup to how a hip, hot model Jennifer (Elisha Cuthbert), gets abducted is pathetic. I actually laughed at how they pulled this off. The attempt to portray this scared, shallow woman as a suddenly powerful entity after her captivity is nearly as bad. I can’t imagine anyone cursing off their tormentor especially when they’re bound up and being threatened – but she does it again and again. I’m not even going to get into the finale or about how obvious and boring it is.

Failure point two: Not a single moment of believable fear. Nothing; nada. The concept of trying to play mind games with Jennifer was interesting, but not nearly developed enough to be effective. I literally sat twiddling my fingers as the captor tried to psychologically attack her. Making her drink chopped up body parts, shoot a dog and watch lame acid bath torture scenes on a television was hardly anything I’d call scarring. I’ve done that shit in a lazy afternoon with time to kill. Hell, aside from the actual attacks, Cuthbert didn’t even appear scared! She slept like a baby, and even managed to get herself a bit of lovin’ from a fellow captive! Hardly anything I’d call life threatening. This leads to the next point.

Failure point three: Terrible acting. Elisha Cuthbert is clearly out of her element here. She’s obviously not a critically acclaimed actress, nor is she reaching out to become one, but her emotional range is nonexistent (she must stick with her strengths — making movies like “The Girl Next Door”). I don’t think there is a time when I felt she was truly scared or worried. All her actions and words looked as if they were scripted (which of course they were). Her costar and fellow captive, Daniel Gillies, was even worse. He really needed to be believable since his character had so many different facets. Unfortunately, his performance was better suited for a robot (Marvin from “The Hitchhiker’s Guide to the Galaxy” come to mind).

While I had hoped for a captivating story that combined one part “Hostel” (for the torture), one part “Saw” (for the mind games), I instead got an unfinished product with poorly crafted elements of each. Captivity should have been much more than it is. Joffé should be ashamed that he attached his name to this. Oh well, the waiting continues for something worthwhile to present itself . . . let’s hope I can keep my dark side contained until then . . . 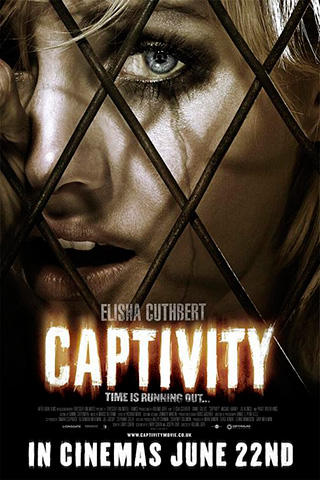