To be perfectly honest, I had no idea what to expect when the opportunity to watch Wind Chill presented itself the other day. I knew nothing of the story other than there were some ghosts harassing some stranded college kids. So like I do with all movies, I buttered my popcorn, sat back and prepared myself to be dazzled . . .

And dazzled I wasn’t. My one sentence description is basically all there is to Wind Chill. A girl (Emily Blunt, “Irresistible”) shares a ride with a guy (Ashton Holmes, “A History of Violence”) home during winter break. Along the way they get into an accident and find themselves stranded on a deserted, country road in a snow storm. During the night ghostly apparitions appear and congregate at a deserted house located in the woods. The ghosts come in the forms people who died on or near the road – priests, a highway patrolman and various families. We soon realize that they’re doomed to relive their lives again and again in what Nietzsche called “Eternal Recurrence” (not to be confused with reincarnation).

So what do our unlucky stars do? They lock themselves in the car. For the next few hours these two college kids argue like old incompatible married folk who got married solely because the man knocked the woman up. The girl, yes that is actually what the credits list her name as, is a miserable bitch. We’ve all met a girl like this — cute (thinks she is awesome though) with a cool “I am better than you” attitude. The guy, yes it is in the credits too, is a dork. He couldn’t muster the courage to ask his love interest on a date, so he resorts to offering her a ride home just to be close to her. Grade A stalker material. Anyways, they realize they’re going to freeze to death so they huddle up, stop the dreadful bickering and try to wait for sunrise. Problem is, the ghost of Mr. Patrolman (Martin Donovan, “The Visitation”) ain’t gonna let them rest. Turns out he was a rogue policeman who was responsible for 90% of the deaths on the stretch of road our couple find themselves on. And he stop at nothing to get them to join his afterlife extravaganza.

The trouble I had with Wind Chill was it screened very unpolished and raw. The entire movie takes place in a car stuck in a snowbank on the side of a country road. For this to work the writing, cinematics and acting needed to be extremely sharp. The writers, Joe Gangemi and Steven Katz prove once again why their scripts are strictly C-level. No character development and a severely underdeveloped plot. Cinematically, the director, Gregory Jacobs, tried to capture the fear and desperation of these kids, but his attempt falls short of the bullseye. There are only so many camera angles to shoot from within a car! The acting is rather suspect too. Emily Blunt and Ashton Holmes don’t have the strength to carry a movie on their shoulders at this early stage of their careers. Perhaps in a better story they’ll shine (Emily was great in “The Devil Wears Prada”).

Long story short, the ride to Wind Chill is a ride I would skip. Perhaps, if the script had a few extra rewrites and the final cut had a few more thrills, this movie would be worth your time and money. Unfortunately, that isn’t going to happen. So for those who need a horror-thriller to get their adrenal glands pumping I’d see “1408.” It’s the best scare ride in town at the moment. 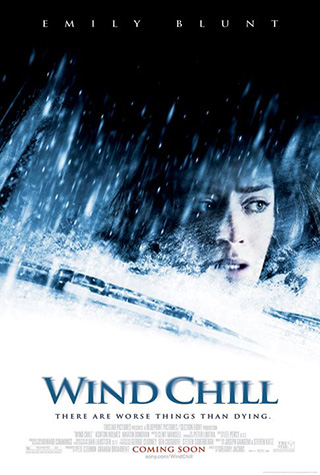