Co-directed by Julie Cohen (“American Veteran”) and Betsy West, RBG is a celebration of the life and career of 85-year-old Supreme Court Justice Ruth Bader Ginsburg, also known as the “Notorious R.B.G.,” a reference to the famous rock star “The Notorious B.I.G.,” and the title of a book about her by Irin Carmon and Shana Knizhnik. The documentary is a tribute to the accomplishments of the diminutive and pixieish woman whose legal career has promoted the cause of gender equality, abortion rights for women, laws governing search and seizure, and other social issues. The film does not pretend, however, to offer a balanced, objective perspective of Ginsburg’s strengths and weaknesses as a jurist or examine any valid disagreements with her legal opinions. The only negative discussed is (what some consider to be) her inappropriate comments about a 2016 Presidential candidate.

The film opens with some carefully selected name-calling from unseen accusers who call her a variety of pejorative words such as “vile,” “wicked,” “zombie,” and “witch,” words you would normally only see strung together in a presidential tweet. Interviewed are former President Bill Clinton, playwright Arthur R. Miller, feminist icon Gloria Steinem, and Utah Senator Orrin Hatch, as well Ginsburg’s children: Jane, a professor at Columbia Law School, James Steven, a music producer, and granddaughter Clara Spera, a graduate of Harvard Law School who refers to her grandmother as “Bubbie,” an endearing Jewish term. The film highlights major aspects of Ginsburg’s life including her confirmation hearing in 1993, her 56-year-marriage to the late New York tax attorney, Martin D. Ginsburg, her two-time battle with cancer, her struggle for acceptance as a woman at Harvard and Columbia Law Schools, and her frustration in seeking to find employment as a law clerk after graduation.

Though RBG has a serious purpose, views of Ginsburg doing push-ups at the gym, attending the opera, talking to high school students wearing Ginsburg T-shirts, and watching a spoof of her by comedian Kate McKinnon on “Saturday Night Live,” provide a lighter side to her personality, one that we rarely see. She even jokes with the late arch-conservative jurist Anthony Scalia, and makes a humorous comment about her falling asleep at the State of the Union address. After her tenure as a law professor (one of only 20 female law professors in the country) at Rutgers University, Ginsburg became active in the ACLU’s Women’s Rights Project, and the most compelling part of the film is the discussion of some of the landmark court cases she was involved with.

In her capacity as general counsel for the Project, she argued and won five of six cases before the United States Supreme Court. When she argued her first case, she said, “I knew that I was speaking to men who didn’t think there was any such thing as gender-based discrimination, and my job was to tell them it really exists.” The cases include Frontiero v. Richardson (1973) which challenged a statute denying a married female Air Force lieutenant the right to receive the same housing allowance as a married man. In Weinberger v. Wiesenfeld (1975), she represented a widower denied survivor benefits under Social Security, opposing the statute that allowed widows but not widowers to collect special benefits while caring for minor children.

In one of her arguments, she quoted Sarah Grimké, 19th century abolitionist and attorney, who wrote in an 1837 letter, “I ask no favors for my sex. I surrender not our claim to equality. All I ask of our brethren is that they will take their feet from off our necks.” After being appointed to the U.S. Supreme Court by President Bill Clinton in 1993, her opinion was a determining factor in allowing women to attend the Virginia Military Institute for the first time. She also authored the majority opinions in United States v. Virginia, Olmstead v. L.C., and Friends of the Earth Inc. v. Laidlaw Environmental Services, Inc.

Though she considered herself to be cautious in her approach to the law, when the court made a sharp right turn, her dissenting opinions presented a strong counter argument to the majority. Among other cases, her voice was heard in Bush v. Gore (2000) which decided the 2000 Presidential election, and in Shelby County v. Holder (2013), a decision that found Section 4 of the Voting Rights Act of 1965 to be unconstitutional. It is clear from RBG that Ginsburg’s appeal has gone far beyond her legal opinions and that she has now become an icon to millions of people throughout the world. Emma Goldman once famously noted that she did not want any part of any revolution that did not let her dance. Ruth Bader Ginsburg’s lifetime of support for human rights has allowed many to dance, some for the first time. 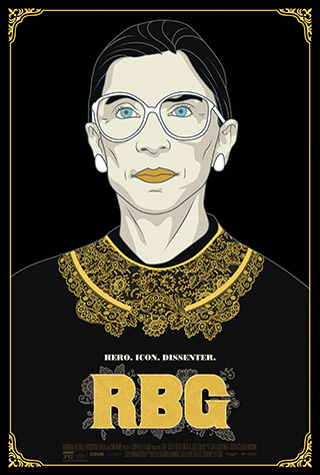