To describe what breed of horror movie Somebody’s Darling is would be a spoiler in itself. Suffice to say, it’s small-scale, slow-burning, strange and sometimes surreal. It’s also very good.

The setting is Williamsburg University, in 2006. History student Sarah (Jessa Settle, “Accidentally Engaged”) and her bitchy buddies arrive at a frat party and find it to be surprisingly upscale. It turns out that the host is the fraternity president, Christian (Paul Galvan, “Teeth”) and he takes an instant shine to Sarah. But she’s seen his type before — or so she thinks — and she rejects him. This is, after all, the kind of party where the women are described as “hens” and the men “foxes.”

Mocked for her prudishness, outside of the party environment Sarah sees a different, more sensitive side to Christian. They go on a date. They seem to connect. But then she stops calling. This isn’t a situation to which alpha male Christian is accustomed. He becomes jealous and obsessive. His infatuation draws him into a dark place and he withdraws from his responsibilities and his friends. His frat brothers, who are conspicuously unsympathetic, demand that he rediscover his mojo — by brute force, if necessary.

There is a hint of “The Riot Club” in the film’s depiction of these malignant high society forces, bound to tradition and masculinity. And perhaps, in straying into outright horror territory, there are nods to Brian Yuzna’s “Society.” But this is less broad than either of those films. For the most part Somebody’s Darling is a character study about obsession and possession.

Christian, deftly played with charm and fragility by Galvan, has a stark recurring dream about dual thrones atop a mountain. He sits proudly, but the queen’s seat is empty — until he meets Sarah. He has illusions of grandeur, and delusions about his prey. Meeting Sarah marks a collision between his self-importance and his actual importance. It’s a sobering, withering realization on his part.

Meanwhile, the fraternity brothers are appalled that Christian might be in love. They regard him as a traitor to their twisted cause. It is a cause steeped in rape culture, which wields unquestionable power, not just in terms of its victims, but over the minds of its perpetrators. In a way, it’s the masculine equivalent of a witches’ coven, and it’s genuinely disturbing. “You keep resisting,” is how Christian characterizes Sarah’s behavior. The sense of entitlement is manifest, with Christian unable — perhaps not allowed — to accept the agency of Sarah.

A bold credits sequence, with its squared-off pop art and stabbing orchestral strings, is like some minor Saul Bass work from the late ’60s. And at times the film renders the grainy distancing of bleak ’70s drama, whilst capturing a similar paranoid mood.

But Somebody’s Darling is a very modern story about toxic masculinity, betraying an anxiety about the fading of the traditional male archetype (for the frat pack, vulnerability is equated with weakness), combined with the vile backlash against new-wave feminism, which in the real world we witness in the abuse apologist and the normalizing of misogyny.

There are shades of Lars von Trier, and indeed the Dogme 95 movement more generally, in the claustrophobic focus on a sordid underbelly of ostensibly respectable society; in the discomfiting close-ups and the dreamy digital blur; and in the examination of toxic masculinity and the abused psyche of the female.

Love stories — even the blood-drenched ones — depend on chemistry, and Somebody’s Darling never quite nails the perfect meet-cute that has you believe that it could be love — or obsession — at first sight. But Christian and Sarah do share an affecting, strangely intimate phone scene in which Christian describes a bloody Civil War battle. Life is competition for someone like Christian and his company; he feels like he’s in a war. He may not consciously want Sarah to be something to be conquered, but in the end that’s his only plan of attack.

Considering this is Sharad Kant Patel’s first feature film — as writer, director and editor, no less — it really is an unusually controlled piece of work. It sustains a marvelously unsettling mood, heightened by the film’s dusk and dead-of-night settings. Patel also provides the excellent nails-on-chalkboard music, which is punctuated by sprigs of warm but fractured melody, as if romance is trying to break through the bleakness.

Of course, all of that would be mere stylistic blah were it not for thematic substance, and thankfully Somebody’s Darling is rich. A highly satisfying final reveal makes sense of — and makes up for — the protracted mystery preceding it, flooding the film with new meaning and its characters with new motivation. Some may see the “twist” from a mile off, but it’s still a shocking jolt.

Some patience is required, however. I’m not sure the lack of information about what the hell is going on could push much further than 80 minutes. But then, it doesn’t. This is an original and remarkably well-made micro-budget oddity, which is sure to gather a small cult following, and marks out Patel as an auteur to watch closely. 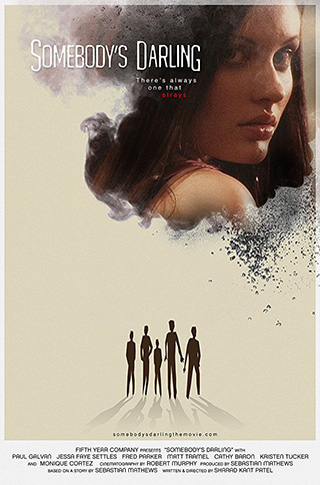