The Devil does many things in movies. He rides out, he has a brigade, he hangs out with Miss Jones and Daniel Webster, and he even thumbs a ride. And, apparently, he lives in a farmhouse in rural Brazil in the aptly named The Devil Lives Here. (This would be useful information for the local postmaster, I suspect).

Jorge (Diego Goullart), his lady Alexandra (Mariana Cortines), and his cousin Maria (Clara Verdier) are off on a jaunty journey to visit their pal Apolo (Pedro Carvalho, “The Way He Looks”) in the middle of Nowheresville. They’re not there just to have a rousing good time, though; it just so happens that it’s also the day that the locals raise a former slave from the dead for perfectly good reasons that are clearly indicated in the movie. Telling you now might ruin the surprise.

No, The Devil Lives Here is not really the slasher pic it looked to be from the start. Here’s the backstory. It seems that once upon a time the farmhouse and much of the land around it was owned by a rich white fella nicknamed the Honey Baron, on account of he was a big-time beekeeper. And he had slaves, plenty of them. He treated the slaves pretty terribly, too. One too-smart-for-his-own-good slave, Bento (Sidney Santiago, “Desert World of Black Souls”), was the son of one of the Baron’s kept women. As in he kept her chained up in the basement. Anyway, legend has it that the Baron forced poor Bento to consume a large jar of fresh honey just for kicks. And when Bento’s mom found out, boy was she mad!

Upshot is that in the present day there’s a curse on the farmhouse. Once a year, Bento must be raised from the dead so that his spirit can wander free. Presumably he goes back underground afterward, since they do it every year. And for a long time, the house’s caretaker Flavio has performed the ritual to bring Bento back. But Flavio is now dead, so Apolo figures no one is coming to do the ritual, which he only half-heartedly believes in. That assumption turns out to be erroneous and creates quite a bit of mayhem for our four young leads.

The first half or so of the movie is really well done, particularly in the way it sets a terrifying atmosphere. In fact, even though one can easily see where things are going, it’s tough not to feel a deepening sense of utter dread. That’s fine filmmaking right there. No jump scares, just mounting tension. Because while our youthful quartet is alternately playing with and scaring each other, they each have a sense that something untoward is going to happen. One of them hasn’t been to this farmhouse before, and even they’re a little spooked. Of course, their comrades aren’t helping, but beneath their teasing exteriors lurks a whole lot of unease.

But then just as the plot pace quickens, the story hits a bit of a wall. The plot, not that fear factor, begins to take center stage, and it’s a little too twisty and a mite too clever for its own good. Also, one begins to question the characters’ decisions. One viewing of The Devil Lives Here would leave most audiences a little confused at the actions of the characters; they seem kind of intelligent at first but then make really silly choices. I know, kind of a trope for horror/thriller hybrids, but for me things just began making a little less sense.

Hey, the acting isn’t bad, though. Not at all. All four of the leads do a fine job with the sometimes murky script as written by Rafael Baliú, M.M. Izidoro and Guilherme Aranha. Even the actors responsible for conveying the lurking, shambling evil are magnificent. But the movie’s too short for its sometimes-complex plot, with a bit too much crammed into a relatively brief runtime. The ending is an upside, however, a departure from the typical Hollywood conclusions. 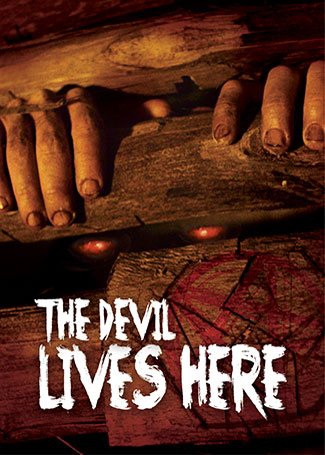