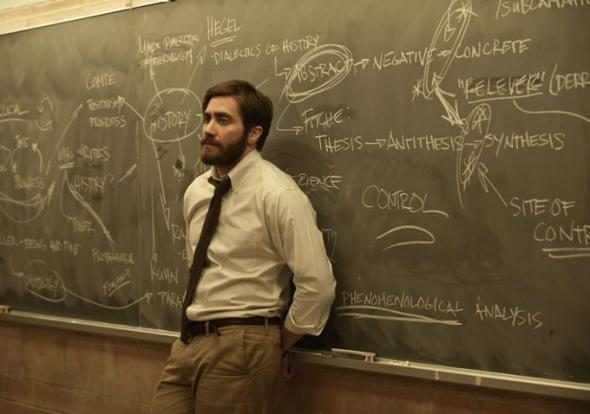 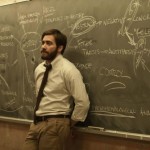 Denis Villeneuve knows the truth: Spiders are evil. And now he’s made an entire movie about this. It’s hard to say whether Villeneuve is a genuine arachnophobe or just not a fan of the definitive creepy-crawly creatures, but his deliciously bleak head-trip thriller Enemy is absolutely littered with them. The arachnids are up to no good here, though to be fair, they’re not the only ones with a sinister agenda in this deliriously dark picture.

Enter Adam Bell (Jake Gyllenhaal, “Prisoners“), a mild-mannered professor who shuffles through life in a sickly hued Toronto with an aimless malaise that follows him like a persistent personal cloud. He’s trapped in a dreary circle, unable to move forward. His apartment is depressingly empty, his mother (Isabella Rossellini, “Keyhole”) is worried about him, and his attractive girlfriend Mary (Mélanie Laurent, “Now You See Me“) can’t even drag him away from marking papers with an invitation to the bedroom. Adam isn’t just stuck in a rut; he is a rut.

But everything changes when he watches a movie (the result of asking for a “cheerful” recommendation, an ironic request in a Villeneuve pic) and soon discovers that a small role is played by none other than his very own doppelganger. The presence of this actor is so subtle that Adam doesn’t even notice it at first, only making the connection later in a dream. And then he can’t get it out of his head. So begins Adam’s journey to hunt down his double, setting off a series of devastating events that tear at his psyche.

When Adam finds the actor, whose real name is Anthony, Enemy develops a fork in the narrative path and we witness the dual storylines unfold from that point on. Anthony has a beautiful blonde partner, too, named Helen (Sarah Gadon, “A Dangerous Method“), but she’s his wife and she’s pregnant, so it’s not like his relationship situation is a mere mirror of Adam’s. Physically, though, the two are nearly indistinguishable, since Gyllenhaal wears the same bearded look for both roles, only providing some visual division in their differing wardrobes.

In terms of personality, Anthony exudes a brusque confidence that Adam probably wishes he had. Neither guy seems to have any clue as to what’s happening or why, but it’s clear that this is a chilling situation for everyone involved, including us. The score by Danny Bensi and Saunder Jurriaans causes a blanket of dread to cover almost every scene, so the screws of tension are turned tight at all times. That’s a difficult note of terror to maintain without it becoming monotonous, but Villeneuve embraces the challenge and keeps digging deeper under our skin by keeping the imagery fresh and the conflict cerebral.

So where do the spiders come into all of this? Well, just about everywhere. It’s the why that leaves us scratching our heads, but that’s the beauty of Enemy, that its mysteries are multi-faceted, that they live and breathe in the dark corners of the narrative, open to all sorts of fascinating interpretations. One of the first shots shows a woman’s shoe about to crush a tarantula, so perhaps what follows is actually a spider revenge tale. Whether or not that’s the particular interpretation one wishes to explore, it’s clear that the creatures manifest themselves as monsters here, invading Adam’s mind and closing in on his sanity.

Adam’s dreams are haunted by the arachnids, revealing such striking images as a gigantic spider towering over skyscrapers while it slinks through the city and a naked woman with a spider head walking upside down through a hallway. These shots offer the motif at its most blatant, but they make such an immediate impression because they’re instantly iconic and they hurl us into Adam’s experience, creating a visualization of the movie’s terrifying tone. 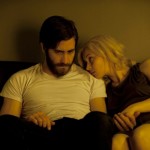 A more subtle employment of the spider motif starts to creep into the picture as the story progresses and the situation worsens, as if the arachnids have sunk deeper not only into Adam’s consciousness, but the movie’s as well. At one point, the camera glides across the ceiling, looking down at Adam from a menacingly unusual angle. At another, the splintered glass of a car window suggests a spider web in its cracked formation.

The robust ubiquity of the whole narrative pattern makes for an absolutely hypnotic experience, but what is most impressive is how Villeneuve and screenwriter Javier Gullón, adapting a novel by José Saramago, leave it all up to us to determine how much is real and how much is imagined. The degree to which the imagery could be interpreted as metaphorical is up for debate, meaning there’s as much room for a fantastical theory as there is for something more grounded, such as the possibility that this is all part of an elaborate plan to cover up an extramarital affair.

By providing such depth and dimension for both Gyllenhaal-performed characters, Villeneuve ensures that Enemy is more than an unnerving head-scratcher, but additionally a taut, engaging examination of lives unraveled and reformed. There’s dramatic weight to the intertwined existences of Adam and Anthony, because the emotional dangers have been boiled down to an inescapably cramped and personal space that threatens to consume the characters and the entire movie with them. Mysteries abound, but one thing is for certain: You can’t trust the spiders. As Enemy so elegantly and eerily declares, they don’t trust us, either. 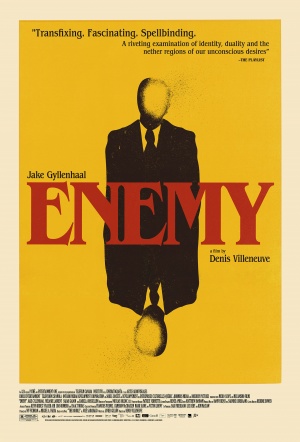