One of Europe’s most popular tourist destinations, Copenhagen, Denmark is a city of wide canals, narrow cobbled streets, and colored buildings. The city’s beauty is fully captured by cinematographer Alan Poon in Mark Raso’s debut feature Copenhagen, a film that might be described as a joint “coming-of-age” saga. It is the story of two people, a 28-year-old American tourist and a 14-year-old hotel intern with similar family backgrounds, who forge a relationship out of a mutual need for companionship. Unlike another recent film with a similar theme, the awkward disparity in age between the two is acknowledged, discussed openly, and handled with restraint and sensitivity.

Getting to know William (Gethin Anthony, “We Are Monster”) who is traveling through Europe with his friend Jeremy (Sebastian Armesto, “Anonymous”) is like making friends with a saw-scaled viper. The personification of the “Ugly American,” the obnoxious William is in Denmark to personally deliver an untranslated letter written by his deceased father to William’s grandfather many years ago. We meet friend Jeremy and his girlfriend Jennifer (Olivia Grant, “Stardust”) early, but Jeremy is luckier than the poor viewer. He can pack up and leave his loud-mouthed friend at any time and, in fact, takes advantage of the opportunity by going to London to get married. Never having met his grandfather and not knowing even if he is still alive, William has few clues to go on in his search.

He has some help, however, when a waitress Effy (Frederikke Dahl Hansen, “You and Me Forever”), accidentally spills coffee on the letter. It may not exactly be “meeting cute” but it serves the purpose after they dry off. Effy, as superbly portrayed by Hansen, is not a typical 14-year-old but quite mature for her age, highly intelligent, and skilled at tracking down leads. As they attempt to decipher locations gleaned from William’s father’s childhood photos, we learn that both come from dysfunctional families. William’s father deserted the family after a final smile when William was a boy and he now discovers that his grandfather was a Nazi who also disappeared.

Effy and William, in spite of their age difference, have great chemistry together and their relationship can be described as erotic without being sexual. One of the most beautiful scenes in the film takes place in a museum when Effy stands next to an ancient statue in which their contours are almost identical and an awestruck William gently runs his fingers up and down the face of the statue. Though there is much temptation, William’s growth as a person comes with the realization of Effy’s vulnerability and his own responsibility for her well being. His refusal to commit an illegal act even though Effy will shortly be 15, the legal age in Denmark, allows him to see himself and the world in a new light. 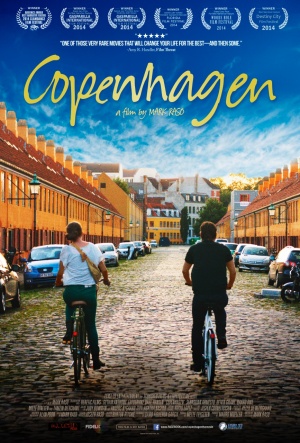