Body horror aficionados that double as completists feel like as wide an audience as writer/director Danny Perez’s trashy horror flick Antibirth can possibly be aiming for. Who else would voluntarily watch this? Perhaps you could add diehard Natasha Lyonne (“Sleeping with Other People”) fans to the mix as well, but surely that list isn’t long. Lyonne was once an iconic face of the 90s indie movie scene who always brought a uniquely sardonic dose of personality to the movies in which she starred, but now her shtick has lost its edge.

Antibirth follows strung-out stoner Lou (Lyonne), who lives in a dive on the outskirts of some putrid hellhole town, getting high every chance she gets, which is, well, always. Lou’s friend Sadie (another 90s indie pic alum, Chloë Sevigny, “Love & Friendship”) is mixed up with the local drug dealer, who recently threw a party that Lou attended. The drugs flowing through the town include some sketchy untested substance that no one wants to talk about and that Lou may have come into contact with at the party.

This information is sussed out in a miserable mashup of scenes wherein Lou repeats, “I feel like shit” more times than Lou can likely count. Lou smokes pot, feels like shit, tells Sadie she feels like shit, smokes more pot, feels worse, goes to work at her motel cleaning job where she basically just eats someone’s old leftover pizza, and then complains even more about how much she feels like shit. To call this pointlessly and painfully repetitive would be an insult to repetition.

Eventually, Lou discovers that she’s been mysteriously impregnated and her body appears to accelerate the gestation period so that she’s ready to pop in just a few days. So that’s why she feels like shit! Things get mildly interesting at this point, with some creepy makeup effects stepping in to suggest that Lou’s womb isn’t exactly housing a regular fetus, but this is deep into the longer-than-it-sounds 94-minute running time and there’s not much of a movie to salvage by then.

Lyonne croaks and gags her way through the part while Sevigny offers little support in an empty role. Meg Tilly (“Bomb Girls” TV series) shows up as a local nutjob who may be more tuned in to what’s really going on than anyone would care to admit, but like everyone else in the movie, she’s more irritating than intriguing.

Antibirth finally gets a bit weird and wacky at the end, during which it actually offers up a few fun visuals, but it’s literally over just when it manages to push out something squeamishly memorable. The finale could be a fun note to end on if the preceding 90+ minutes weren’t such a disaster. Too bad the movie wastes the vast majority of its narrative space wandering in circles and making us dislike the meandering characters.

Injecting drug addiction into a body horror situation is a novel idea worth exploring, but this particular exploration is misguided from the start. For the most part, its only semi-worthwhile purpose appears to be updating us on what Lyonne is currently up to all these years later. Otherwise, this isn’t ever scary or funny enough to work as either a solid fright flick or an unintentional parody. Antibirth is simply a roughly awkward watch, akin to taking a cheese grater to your brain. How’s that for some body horror? 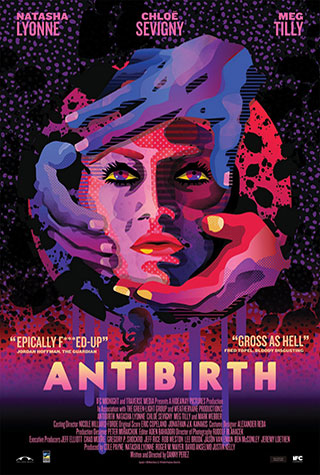