From the premise that all extra-terrestrial life is harmful comes Life, a combination of “Alien,” “The Thing,” “Gravity,” “The Mummy” and a few other trapped-in-space or alien-assimilation movies that we all know and love (or tolerate in some cases). Life is the story of the six-member crew of the International Space Station who, while orbiting Mars, discover a new form of life. And, of course, we all know what happens next. That’s all well and good, though, since we are not expecting anything other than fast action and quick deaths, and the audience will certainly not be disappointed in the film’s rather short running time (just a tad over 100 minutes; no doubt folks in earlier years had more patience with story and character development than we currently have).

In space for almost a year, the crew (with a heavy international vibe going on), consists of two American studs (Jake Gyllenhaal, “Nocturnal Animals” and Ryan Reynolds, “Deadpool”), a Brit researcher (Ariyon Bakare, “Jupiter Ascending”), the Frenchwoman commander (Rebecca Ferguson, “The Girl on the Train”), a Russian technician (Olga Dihovichnaya, “House of Others”) and a Japanese scientist and new father to boot (Hiroyuki Sanada, “The Wolverine”).

Things are pretty mundane, but when a life form is brought aboard from the surface of Mars, the world celebrates while a bunch of goofy kids name it “Calvin” (after their elementary school). Meanwhile, Hugh Derry (Bakare), begins treating the species like his own offspring, coddling it and even bringing it back from suspended animation. There is not much suspense to realize that this action causes the semi-protoplasm to grab the guy’s hand and render him mostly useless for the rest of the film (plus the trailer gave that away).

It’s here that the astronauts, who are no more than cookie-cutter placeholders, violate not only NASA protocol, but every rule of motion pictures within this genre by opening the lab door and ultimately allowing the growing organism (now looking like a translucent octopus) to attack each of the Space Station members one by one (like we’ve seen before, right?). For example, an astronaut has the thing enter their mouth and come out even larger and stronger; another incident has the crazed being bouncing around in space (where it is not supposed to live, but it maintains enough oxygen to survive until it can re-enter through a thruster port; and finally, the creature is able to make its way into space suits and other sealed equipment, rendering it practically invincible.

The last resort calls for survivors to utilize a pair of escape pods, sending the creature into deep space while the other returns to Earth; it’s during this segment that a more than obvious twist may or may not take place (I even found myself saying to the person next to me, “Uh, there’s two pods and . . .”).

Nonetheless, director Daniel Espinosa (“Child 44,” and doing his best Ridley Scott impression) makes fairly decent use of the limited time and produces some thrilling moments, while the camera work of Seamus McGarvey (“Godzilla”) is both claustrophobic and vast with some truly amazing scenes inside the space station; and the special effects (mostly the ever-changing alien life form) overseen by David Watkins (“Fantastic Beasts and Where to Find Them”) is quite realistic and very frightening in some sequences.

It’s too bad all of this wonderful technology could not have supported a more original idea. Still, Life is not a bad ride, it’s just that most of us have lived it before. 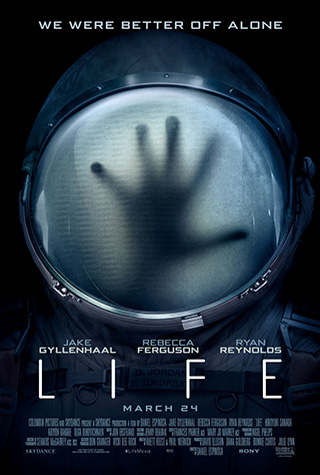