With each successive movie, Andy and Lana Wachowski prove that their imagination is practically unrivalled in Hollywood and that their awesome ability to bring that imagination to lush, limitless life puts them in the company of cinema’s greatest modern magicians. So it seems only fair that when the sibling team takes on the space opera genre in their overwhelming opus Jupiter Ascending, the only filmmaker that seems comparable in terms of visual inventiveness and sheer narrative propulsion is George Lucas.

Suggesting that the Wachowskis’ latest work has more in common with Lucas’ “Star Wars” prequels than the original trilogy may not sound like a ringing endorsement to some, but imagery this ambitious and a story this sweetly old-fashioned in its wide-eyed innocence falls beautifully in line with the very best of what Lucas and his iconic space opera sensibilities represent.

Of course, the Wachowskis are hugely unique artists and aping another’s style is simply not their, well, style, so their link to Lucas here is more of a kindred spirit situation than some epic rip off strategy. Sci-fi action pics nowadays just rarely have such elegant action, such a tender tone, and such dazzlingly decadent design. Jupiter Ascending is a gorgeous throwback to old-fashioned space adventure, but it’s realized through a bold and flawless use of modern technology that is so elaborate in its computer-generated complexities that my eyes were regularly drooling.

The story kicks off with a sentimental prologue, but the introduction of an ill-fated romance, complete with gentle voiceover, is more sweet than sour. It’s all about the beginning of Jupiter Jones (what a name!), born to the doomed couple of the prologue and destined to clean toilets for rich people with her immigrant aunt and mother as an adult.

Grown-up Jupiter (Mila Kunis, “Oz: The Great and Powerful”) is pretty depressed about her lousy lot in life, but the universe has quite a surprise in store for her. Turns out she’s the rightful ruler of everything across the cosmos and that makes her the target of several extraterrestrial bounty hunters looking to nab her before she can claim her all-powerful title. It seems only elf-eared hero Caine Wise (a game Channing Tatum, “Foxcatcher”) is on Jupiter’s side and so the protagonist pair races against time and across space to ensure Jupiter survives and becomes the ruler she’s destined to be.

It may sound like a bunch of hooey, but the Wachowskis bring such honest all-ages joy to the experience here and then populate it with such a fun cast of creatures and intensely incredible imagery that the story feels intoxicating in its pulpy pleasures. Standing in the way of Jupiter’s success is riotous antagonist Balem Abrasax (Eddie Redmayne, “The Theory of Everything”), one of three ancient siblings who currently own the universe and stand to lose much if Jupiter takes over. Redmayne delivers nearly all of his lines in a hoarse whisper and the costume and makeup departments give him a distinct look that strongly supports the unhinged theatricality of his performance.

Balem has several cronies at his beck and call, too, including giant humanoid lizard bats that fully satisfied my desire for alien hybrids of nifty Earth creatures. He even uses as his home base a planet so thoroughly coated by a roiling blanket of an electrical storm that its creamy complexion can be seen hypnotically swirling from outer space. Everything about Balem is over the top, but the Wachowskis use him as a sort of petulant poster child for all of the intergalactic luxuries and excesses they can dream up, leading to so much delicious imagery.

The total amount of visual information on display here is staggering. Spaceships abound and multiple aliens (including one with the head of a miniature elephant!) are everywhere, while a planet whose residents have been reduced to sparkling blue sand makes a brief and memorable appearance. It all adds up to an astonishing experience where our eyes are given the grand opportunity to explore without ever losing sight of the actual adventure at hand. The Wachowskis remain masters of magnificent world-building and are experts at capturing flurries of activity in ways that feel unique to that specific world.

Jupiter Ascending is a fun, exquisitely paced romp at all times, but when it launches into a major set piece, it smashes through to some stratospheric new level of explosive excitement. One early aerial chase through downtown Chicago pits Caine, fitted with special rocket boots that let him skate across the sky, against a host of alien baddies attacking with cloaked ships and major firepower. The result is something to watch in a state of absolute awe.

It’s one of the most wildly wonderful and visually sophisticated action sequences I’ve ever seen. It exists on a completely different level than nearly everything that makes the final cut of current blockbusters and the speed with which the Wachowskis juggle the moving pieces without dropping a single element and without ever sacrificing our inherent sense of spatiality should deservedly put them in the conversation of the greatest action directors of all time.

Between this, “The Matrix,” and “Speed Racer,” the Wachowskis have made several invaluable contributions to the sci-fi/action genre. Their movies are often visually spectacular and invigorated by brilliant editing and their imagination has proven boundless. As Hollywood blockbusters become safer and more homogenized, the Wachowskis represent a corner of expensive large-scale filmmaking that is endlessly worth visiting.

To spend time in their world is to be reminded of the childlike glee that comes with sitting on the edge of your seat and being wowed by the transportive powers of great spectacle artists. The Wachowskis are not for everyone (especially not if box office receipts for Jupiter Ascending are any indication), but they’re most certainly for me. Call me crazy, or better yet, ship my body to Jupiter, because wherever the Wachowskis will take me is where I want to go. 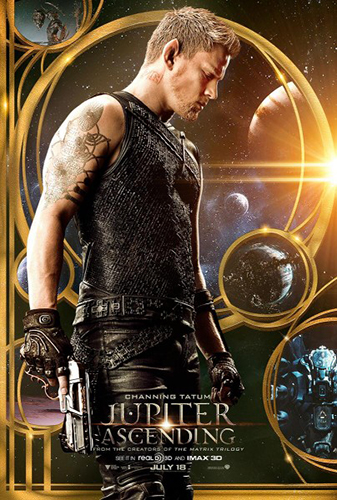