It’s just mean to dangle an actor like Rutger Hauer in front of a fan of dark movies only to snatch him away mere minutes after the play button is pressed. With top billing and a front and center picture on the movie poster, Hauer tempts you into Real Playing Game as ailing elderly millionaire Steve Battier, a man who doesn’t remember what it’s like to live pain-free. That is until he meets with Mr. Chan (Chris Tashima) and learns that the RPG Corporation has harnessed the power of youth, and for a nominal fee, Steve can once again enjoy life in a young and beautiful body. Unfortunately, their research team hasn’t figured out how to make the transfer permanent, so Steve can enjoy his new-found youth only for a short time. In addition, he must play a game — a Real Playing Game — in which he and nine other ailing and wealthy ladies and gentlemen battle for their lives in their young bodies.

The game — if it can be called that — begins in a derelict building in Portugal (apparently this is the location the group chooses; why is never properly explained). Each person wakes up confused and nervous, and eventually they all gather in a room where Mr. Chan appears and reveals to them the truth of the game. Ten holograms appear behind Mr. Chan — holograms that represent each of the elderly players. The rules are simple: 1. Every hour, someone must die, or else the game will randomly choose one of the contestants for death. 2. Once you’ve killed someone, you must return to the room and touch the hologram of the person you’ve killed. The catch is that you may not know which player you’ve killed, and if you’re wrong, you die as well. Gender and race are not set in a 1:1 ratio in this game, as each player has selected his/her new young body. While there are five elderly men and five elderly women, there are six young ladies and four young men. Mr. Chan, a hologram himself, disappears, and the game begins.

At this point, you’d expect a suspense-filled game of cat-and-mouse as each player hunts down the next, trying to figure out who’s who and how to ultimately survive the ordeal. What actually follows is a series of interactions between poorly portrayed characters, most of whom are interested in only one thing: Sex. Because, obviously, what else is youth for?

The story is further weighed down by silly stereotypes about gender, nationality, and occupation, and populated by characters that have absolutely no substance. You just don’t care about any of them, not even Cian Barry, who plays the young Steve (would it have been too much to ask for a Rutger Hauer impression along the way?). It’s a lot of waiting around for something, anything to happen that might redeem the movie, but that something never comes. The “surprises” that pop up are anything but interesting, and by the end of Real Playing Game, you’re just praying that there’s a saving-grace resolution (which writer/producer/director, Tino Navarro, doesn’t give, instead opting for just another predictable and disappointing ending). But the icing on the cake? Well that goes to Rutger Hauer (“The Mill and the Cross”) who appears for about five minutes in the beginning, two minutes at the end, and only as a still hologram in the game. The ultimate bait and switch, and it’s such a letdown.

Real Playing Game is a hastily thrown-together low-budget bid at a last-man-standing psychological thriller. It’s centered around an idea that could have worked if more thought had gone into the execution, and if its premise hadn’t already been executed — both wonderfully and horribly — in a thousand films before it. 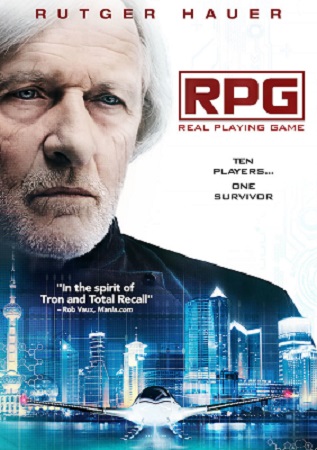