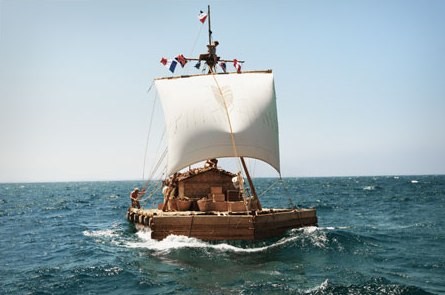 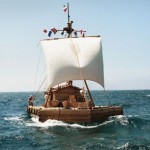 Rafting across the Pacific.

The Andean story of how the world was created by a tall white, blue eyed man with long blond-reddish hair and beard who arose from Lake Titicaca in Bolivia has been passed down by word of mouth through generations of South American Indians. Known to the Aymaras as Viracocha (he was also called Kon-Tiki), Quetzalcoatl (by Aztecs), and Kukulkan (by Mayans), the story is similar to Biblical accounts of the creation of a race of giants who ruled the Earth but who displeased God and were destroyed by a flood. Unlike the God of Israel, however, Viracocha is said to have disappeared across the Pacific Ocean by walking on the water.

Norwegian Zoologist and explorer Thor Heyerdahl believed that Viracocha, rather than walking on the water, left Peru on a raft and floated with the current to Polynesia, a feat he wished to duplicate. (He did not consider the possibility of Viracocha’s connection with the very ancient, advanced technological cultures of Tiahuanaco, Puma Punka, and Chavin de Huantar). Heyerdahl’s accounts of how he and five other men built a balsa-wood raft which he named “Kon-Tiki” and sailed to the Tuamotu Archipelago in the South Seas is dramatized in Norwegian directors, Joachim Rønning and Espen Sandberg’s Kon-Tiki, one of five nominated films in the Best Foreign Language Film category at this years’ Oscars.

The film was shot in two versions, one in Norwegian and the other in English (the one I saw), presumably to appeal to a broader audience. Engagingly portrayed by Pål Sverre Hagen, Heyerdahl is first seen living with his wife Liv (Agnes Kittelsen) on the Polynesian island of Fatu Huku, where he resided for a year. After listening to native accounts, Heyerdahl began to develop the idea that Polynesians originally arrived from the Americas, not from Asia. Opting for adventure rather than character development, Kon-Tiki shows the courage (some call it being foolhardy, or even a death-wish) of the crew that consisted of three fellow Norwegians, as well as Swedish cameraman (Gustaf Skarsgård) and refrigerator salesman Herman Watzinger (Anders Baasmo Christiansen) as his engineer as they traveled 4,300 nautical miles across the Pacific, isolated and alone for 101 days. 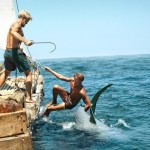 The film pays little attention to the day-to-day routine aboard the raft but concentrates on the thrill of the struggle against sharks, the fierce storms, conflict among the crew (contrary to Heyerdahl’s own account), and the immediate danger of their raft collapsing. The photography, done without CGI effects such as in “Life of Pi,” is striking and beautiful, yet Kon-Tiki is mostly a formulaic adventure story that mimics the superficial triumphalism of Hollywood without capturing the deeper spirit of the journey. Heyerdahl’s character is hardly explored and, while his subsequent travel to Easter Island is noted, there is no mention of his later advocacy of environmental issues and world peace.

While most scientists still oppose Heyerdahl’s ideas and can show strong DNA evidence linking Polynesians to Asians, there are also anomalies that point in a different direction. For example, researcher David Pratt tells us that there are various genetic and cultural similarities between the Polynesians and the Tlingit, Kwakuitl and Haida Indians of Alaska and Canada — something not readily explained by any mainstream theories. In addition, there is the famous Kon-Tiki statue in the sunken Gardens in Tiahuanaco showing a man with a thick beard and mustache (South American Indians are beardless and do not shave). Also, one of the features of this and other statues in the area is the positioning of the hands — one over the heart and the other over the stomach — the same feature seen on Polynesian statues and gold medallions.

Whatever the truth, there is no doubt that Thor Heyerdahl, through his willingness to take risks, brought the topic of seafaring, communication, and migration in the ancient world to people’s attention, and deserves the appreciation he receives in the film. If Kon-Tiki can renew interest in man’s pre-history, it will have served a very valuable purpose. 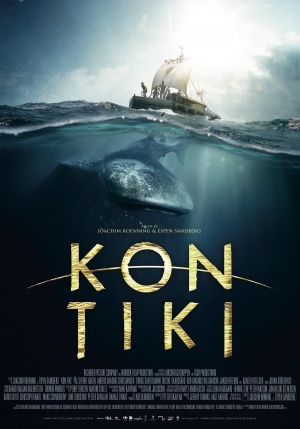