The opening montage of dance clubs and riding motorcycles throughout the Japanese countryside flow along with an eerily tranquil score, letting audiences know from the onset that Ittetsu Nemoto is no singularly-defined monk. Filmmaker Lana Wilson and cinematographer Emily Topper (“After Tiller”) have teamed up with editor David Teague (“Life, Animated”) to explore one man’s comparatively distinctive perspective on the taxing search for solutions to suicide. While acting as a bystander’s account without passing any particular judgement, The Departure is an egress from common treatments on the subject. However, though it explores numerous facets from several fascinating avenues, what makes the documentary so strong as a contemplation piece is also what can be seen as its weakness: A quasi-lackluster visual experience.

Nemoto is a former punk who has made a career as a Buddhist priest aiding suicidal individuals in a variety of ways to find them resources and reasons to continue living. As the film traipses through his day-to-day counseling sessions, temple work, and scattered time with his wife and child, it is apparent that his work comes at a high cost to his peace of mind, his relationships with his family and his good health (partially resulting in a weak heart and enlarged lungs). He leads individuals struggling with suicidal thoughts through a “departure” where they existentially experience death and how their suicide would impact those around them. As he further counsels those who rely on him, regardless of his efforts, his desire to keep these people alive at whatever the cost has fueled his ever-present self-destructive tendencies. And as he reacts to his situation and attempts new paths in his life and work, he continually asks: What makes life worth living?

The pacing and shot composition of each event Wilson and Topper follow Nemoto though maintains a slow and deliberate rhythm at a decent remove from the action, as if channeling the style and orientation of Yasujiro Ozu in documentary form. As a result, the audience has the time necessary to digest what occurs and to respect the seriousness of the topic. The Departure is never exploitative or overly mannered; relying on consistent focus on Nemoto’s face to provide the real drama — it lined with anxiety, stress, and a constant determination. As the wear and tear of his work gets more serious to his health and the role he plays in his young son’s life, the film remains with the same purposeful structure, almost as if to say that however a life is lived, and however long, life will still continue on. And with Nathan Michel’s beautifully resonant music as accompaniment, Nemoto’s questions shift from what makes life worth living to why we should want to live at all.

The ambiguousness and absenteeism of clear answers to these questions presented in the film is not just a stylistic choice, but an important archetypal one. This film will not be for most audiences, for it confronts suicide without actually taking away any definitive conclusions. It leaves it up to the viewer to mull over what it all might mean, if anything at all, and these concepts ebb and flow with frustration and anxiety, for we are in no better position than any of the subjects. Clashing Zen ideology, modern suicide prevention and a touch of almost woefully cheerful nihilism, The Departure is a film that searches deeply for answers but possibly walks away with nothing, and it ensures us that’s alright. 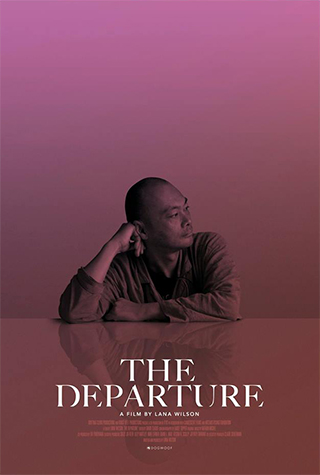