“So why do I step upon the ruins of those most near and dear to me, I, who can be so simply and so sharply wounded and can wound others with such deadly ease?” — Yevgeny Yevtushenko, “Wounds”

Loneliness and pain can be concomitants of old age, but the wounds may often be self-inflicted. Loosely based on the novel “The Temptation to Be Happy,” by Lorenzo Marone, Italian director Gianni Amelio’s (“Happy to be Different”) Tenerezza: Holding Hands is a look at the effect produced in a family by the lack of communication and affection between Lorenzo (Renato Carpentieri, “Babylon Sisters”), a proudly independent 70-year-old widower and his two adult children, Saverio (Arturo Muselli, “The Consequences of Love”) and Elena (Giovanna Mezzogiorno, “How to Grow Up Despite Your Parents”). Co-written by Amelio and Alberto Taraglio, Tenerezza: Holding Hands (tenerezza translates as “tenderness”) is a study of a man of contradictions — charming and playful one minute, then gruff and arrogant the next.

Living alone in a large apartment in the center of Naples, a decaying city which is brought to life by the skillful hands of cinematographer Luca Bigazzi (“Youth”), Lorenzo describes himself as a retired “lamentably famous” lawyer, his practice involving defending con artists whose false reports of car accidents and insurance scams skirt the edges of the law. Estranged from his children, he considers Saverio a layabout, and suspects Elena of telling her mother about his affair with another woman, a revelation that he thinks may have precipitated his wife’s death. The film opens in court where Elena, an interpreter who learned Arabic in Cairo, a backstory of which we know nothing, is translating the words of a Tunisian boy who proclaims his innocence.

Coldly, Elena tells the judge that the Arab defendant is lying, an opinion that was not sought by the court. The scene then shifts to a modern-looking hospital where Lorenzo, recovering from a heart attack, pretends to be unable to speak while Saverio and Elena are in the room, but throws off the tubes and gadgets he is hooked up to and heads for the exit as soon as they leave. As he breathlessly climbs the stairs to his apartment on the top floor, he meets Michela (Micaela Ramazzotti, “Like Crazy”), a young mother of two who has just moved into the apartment facing his with her husband Fabio (Elio Germano, “Suburra”), a naval engineer. The presence of what appears on the surface to be a warm, loving family reignites in Lorenzo a long lost spark of life that has been buried beneath years of cynicism, but there is something odd about the husband.

Suggesting a hair-trigger temper, Fabio wildly overreacts to an immigrant street vendor attempting to sell him some goods and takes a strange interest in playing with children’s toys. The shock of the events that follow is even more acute, however, since Amelio does not sufficiently lay the groundwork to establish their plausibility. The result of these unforeseen events, however, signals the beginning of Lorenzo’s journey to discover a common bond with those around him, the people on whom he has turned his back for so long.

Tenerezza: Holding Hands seems to tell us that the things in life that most nurture us, our ability to give and receive love, are often blocked by considerations that prevent us from being in touch with our humanity. Unfortunately, while the message of the film is one that we can all relate to, its flat and relentlessly somber tone does little to engage the emotions, and the film’s important message is lost in its flawed execution. 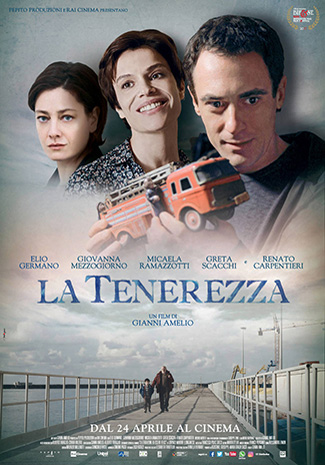