Crimson petals. Red rose. Scarlet sheets. Silk shirt. That’s Julieta’s torso, moving with a breath of agony as she packs her stuff. When we finally see her face, we see the evened eyes of long held pain, the kind that leaves deep-carved scars in what seems to be a life-long depression.

It would not be an overstatement to say that Julieta is the prototype of Pedro Almodóvar’s women, a mother trying to overcome an ache so secret that it only waits for its proper trigger to overflow her again — a woman who transcends in her inner life the many twists that her mysteries bestow.

Julieta, a middle-aged woman (Emma Suárez, “Hazing”), is about to leave Madrid for good and settle in Portugal with her partner, Lorenzo (Darío Grandinetti, “Wild Tales”). It is, as we might expect as any Almodóvar’s average viewer would, a chance encounter that changes Julieta’s mind and turns everything around 180°. All at once, as Julieta stumbles upon a young woman in the street, Beatriz (Michelle Jenner, “Extraterrestrial”), we learn that she has a daughter with whom she’s been estranged for years, that she’s become a grandmother, thrice, that her daughter doesn’t live in Madrid but is firm in the belief that Julieta still does, and that Julieta cannot leave Madrid, for good or ill. The young woman, Beatriz, was Julieta’s daughter’s best friend during both their childhoods and tweens. Now, it is the movie’s job to tell us this story, to tell us about this friendship and, much more importantly, about this broken mother-daughter relationship — how, why did it drift apart. It is a random moment that changes it all, the kind of moments the Spanish auteur lives for.

It would not be an understatement to say that Julieta is all about these random moments that change the course of whatever plan we may have in life. But where Almódovar has thrived as an original, he falls short as an adapter. He proves that Alice Munro’s world, and more significantly her women, orbits around a different kind of sun. Yet, we should also observe in all fairness that the change of orbit sometimes brings unique exchanges, virtuous a few times, intriguing some more, and puzzling many other.

Julieta comes across as a woman who has been secretly preparing herself for this chance encounter, and now, stoically, she just let herself wait. In a back-and-forth narrative that goes to flashbacks framed within an imaginary letter that Julieta addresses to her daughter, Antía, we slowly watch the mystery of their estrangement unravel as we find out who she was before motherhood: A Philology PhD student who falls in love in a train with (another chance encounter) a fisherman travelling by wagon that night. There, that very night, Julieta finds love, conceives life, and (indirectly) brings death.

For Julieta, in this way, life has been a series of random moments defining her operose life. Hers has been a life full of coincidences, all ingrained in a downward spiral in which each moment of happiness is shadowed by a tragic turn of events. And thus she has learned to wait, to wait for her fortune to show up, if, with it, her misfortune will likely follow. She hence returns to the old flat she once shared with her daughter (and Beatriz) to wait for her signal. And she writes this long letter, almost a diary, then a memoir, thus a novel, as though she were invoking her daughter’s presence with it. She comes back to the places “de entonces” (of “back then”), counting on the fact that Antía will keep thinking she’s still there in an attempt to copy and repaste her past, like a ceramic sculpture recently broken by a slight move of hand. Repaste her past she attempts so that it can for once stay in its place, solid, firm, as it once was — or as is wished it were somewhere back then, when things were in their proper place.

It seems as though Julieta has been roaming for a chance encounter with someone she would no longer recognize her whole life. That’s a little bit how she found Xoan (Daniel Grao, “Palm Trees in the Snow”) at the train, as they saw a rutting stag lose control over a moving train, something they both get to witness after she gets to snub a stalking rotter — with fatidic consequences. We find her there reading a book on Greek tragedy — and how well we will get to understand that her deus est machina couldn’t be any more classic. She finds her Ulysses on the train, yet she also seals her fatal fate with the Gods therein. One man’s gain is another man’s loss.

“I would like to bump into you, to see you appearing in front of my eyes,” wishes Xoan in silence, only to see Julieta (the young one, the one in the train, Adriana Ugarte, “Dark Impulse”) coming to him. But before him, we see his maid, Marian (the always otherworldly Rossy de Palma, “Do Not Disturb”), who will be the voice of discord amidst the couple and will sow doubt in Julieta’s heart since the very start, when Xoan is at his lover and childhood friend’s house, Ava (Inma Cuesta, “The Bride”), local artist, sculptor, who will later become Julieta’s closest friend, only after mothering Xoan’s child and becoming a close-knit family unit.

Then, Julieta’s plot will become more and more complicated, with more and more turns and tangents, like the side-storyline of Julieta’s parents, whose presence only serves the purpose of showing how Julieta’s deus est machina is actually a repeated pattern as the paternal household is driven by a father in a triangular relationship with the woman who takes care of her mother, victim of senile dementia. She tries to close the circle by taking casual care of her mother during the couple of days (or weeks) that she stays there. Rather than trying to repaste the past, Julieta’s mother just let it go, lets her memories leave the port with no desire to see them back.

But so many turns and back-and-forths end up wearing us up as viewers. Not since “The Flower of My Secret” (with Antía incidentally bearing the name of a flower, Aphrodite’s nickname) have we seen such a weary Almódovar, dangerously swinging between self and critical-indulgence. At his best, the director’s fascination with melodrama and mystery (Douglas Sirk and Alfred Hitchcock), as well as with the camp scene of his early years perfectly wrapped with early Buñuel’s eye for the absurd, has given us extraordinary, unique films. Yet when this formula falters, and one element dominates over another (particularly when it is Sirkean melodrama, his Sirkadian rhythm), we can find over-intricate, emotionally vague works that lose our attention (and then emotional engagement) at every turn. If it is true that every ellipsis in Julieta resembles a hand denuding a flower, petal by petal, it is just as true that this deflowering process concludes with a shaky stem and a sad corolla. With every secret unveiled the story loses more and more interest, and is easy to feel sometimes tempted to go with either petal than to continue seeing the stripping flower.

Something similar happens with the abundance of references and symbols. Take for instance Greek mythology (and Greek epic for that matter). When it works, as it happens (in one of the few humorous blinks of the film) with the character of Marian, appearing as the perfect Medusa, whose growing resentment provokes storms, sinks ships, and turns people into stone, as happens with the character of Ava, then this reference works exquisitely well. Yet when it fails, as happens with Antía’s manifold incarnations, the whole myth turns into little more than a corny tear-jerker. And we know many of these references are imported from the source, from Munro’s three short-stories and her Juliet, here compressed into one piece, maybe rushing through her motions, definitely leaping through her emotions, positively piling references and symbols, gluing the three stories together (particularly “Soon,” which seems here more a detour than a baseline) the way Julieta does with her own.

The story that dominates Julieta, though, “Silence,” gradually loses the steam that it promises at the very beginning of the film. It tries to keep up with Munro’s narrative of encounters and disencounters, fate and faith — as Antía’s encounter with her faith means the definitive disencounter with her mother. All in all, we find two characters who are unable to digest their grief. In this way, Julieta’s tense relationship with her past at the time we meet her is, perhaps, the greatest virtue she has as a character. She does everything she can to undo the past (in what is, perhaps, the best portion of the film) while, deep inside, she just knows she can’t — and then she finds herself trying to repaste it, the way we do when we try to piece together an old photograph we tore apart at a torrid tantrum.

That point at which Almódovar is at his best is when he captures the void at the center of Munro’s stories, the guilt-driven grief that, like a contagious virus, spreads and takes over its host: “You’re absence fills my life and destroys it from the inside,” says Julieta at one of the better moments of the movie. The problem is that these words say much more than what Almódovar is able to show. It is true, and we see it, that the first thing lost at the face of overwhelming loss is one’s sense of measure. This is perhaps the most fortunate point in Julieta as a film, making a place for Alice Munro and Chavela Vargas to meet, the place of the feminist bolero, of a love doomed by fate, that strange property of time which always takes away every single thing it gives — including life itself. 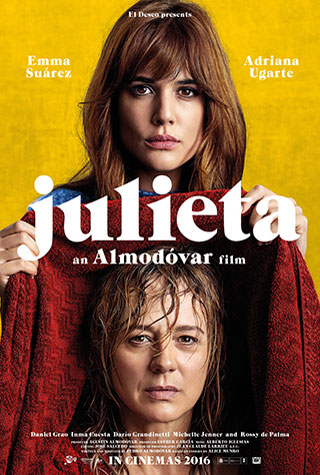