Indian filmmaker Mira Nair (“Amelia,” “New York, I Love You”) presents a rather uniquely touching, emotional and winning spirit in the coming-of-age biopic/sporting drama Queen of Katwe. Nair concocts an uplifting and personalized story of hope and adversity that should be profoundly inspiring especially for young females from all walks of life that face daily disillusionment and despair at every corner. Queen of Katwe taps into the edgy nerves and eventual triumph of an impoverished Ugandan girl that discovers a competitive ability in the game of chess that enables her to conquer her existing predicament of plight and personal pain en route to treasured self-worth and prideful accomplishment. And although the film feels strongly familiar in pathos and promise it is still a capable message movie about disenfranchised youngsters that overcome their desperately humble beginnings in the face of unflattering odds.

Queen of Katwe is based on the sentimental true story of a 9-year old girl named Phiona Mutesi (played marvelously with conviction by newcomer Madina Nalwanga) hailing from the slums of Katwe, Uganda. Phiona is a pretty and bright young gal with a glowing smile, but she lacks formal education and comes from financially dire circumstances. The film’s usage of revealing flashbacks tells the disheartening tale of this precious youngster saddled with economic misery in frighteningly dour surroundings.

We gain insight into how resourceful and focused Phiona is at heart despite her inability to read or write or relate to a world full of opportunities that are not in her immediate, reachable dead-beat universe. She toils away at working thankless, low-paying jobs in the cluttered streets of Katwe by selling produce in an effort to help out her widowed mother Harriet (Oscar winner Lupita Nyong’o, “12 Years a Slave”) and two younger siblings. Again, this is a child taking on major familial responsibilities on her tiny shoulders in the name of survival.

The main force that would influence Phiona’s gift for the game of chess (which incidentally is technically considered a sport) is the local missionary that is stationed nearby in her shantytown homestead. Phiona simply shows up at the missionary looking to curb her starvation, but after one game of chess, Phiona shows how unassumingly remarkable she is at mastering the board. Specifically, mentor Robert Katende (David Oyelowo, “Selma”) is the driving catalyst that shapes and molds Phiona’s hidden talents for chess. Katende believes in her so much that he sacrifices his career ambitions to coach his brilliant prodigy to the point of Olympiad-level chess prominence on the international stage where she could represent her country of Uganda with nobility and cemented pride.

It is an uphill battle for Phiona as she progresses in the saving grace of a game/sport that would essentially serve her urgent needs and fulfill a sense of financial stability for her hurting family. The concentration of Phiona sharpening her chess-playing skills under Katende’s tutelage is quite impressive given her domestic baggage concerning her mother Harriet’s constant struggles and her siblings’ welfare (especially the near miss of her older sister succumbing to the world of prostitution).

Thoroughly engaging and insightful, Queen of Katwe is a wonderfully warm and positive exposition about one young girl’s awakening into a foreign territory where humanity, self-discovery, intrinsic skill and worldly exploration into the art of competition all materialized into a package of a faithful foundation. Nair offers a weepy yet involving character study of a certain kind of deserving and unlikely athlete overcoming the proverbial odds both away from and in front of the chessboard. Films featuring chess are not what one would label as stimulating fare at the box office. Nevertheless, the game is symbolic for one lost little girl contemplating what her next vital move would be and how to checkmate out of one’s stagnant, squalor-induced prison.

Nair shows a respectful affinity for decency and authenticity of Phiona’s embedded sadness, but also the resiliency of her self-motivated aspiration to escape her domesticated demons. As Phiona, Nalwanga is absolutely glorious as the Ugandan national hero who virtually came out of nowhere. Both veteran performers Nyong’o and Oyelowo give thoughtful and polished performances as the crucial adult presence in the weary but spirited eyes of the quietly beleaguered sweet little soul in Nalwanga’s Phiona Mutesi.

Sure, Queen of Katwe treads on its feel-good formula and is typical of the Disney movie-making machine at large. Still, there is nothing artificially saccharine-coated about the royal resonance of the film because this is a tremendously moving motion picture that tackles the beauty and bewilderment of African-based obstacles regarding its cherished and challenged people — and one single young lady from the seemingly hopeless circles in Uganda would prove that there are sunny days ahead in an otherwise forecast of regrettable humane detachment. 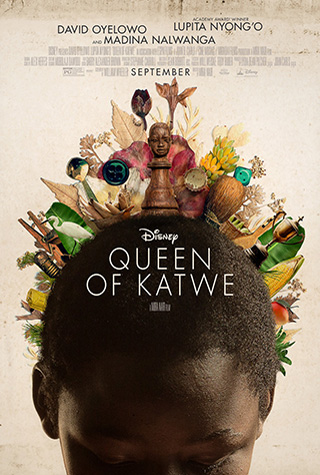