The Uncanny X-Men are back in their best adventure since “X2!” In X-Men: First Class, we see, in fantastic fashion, what transpired to form them together (and tear them apart), and are fed interesting treats (especially to any hardcore buffs) like how Magneto got his helmet, who the superhero Darwin was, and even how the Beast looked like as a human. However, the movie isn’t just appealing to X-Men fans — coming packed with plenty of action, this thrill ride will appeal to fans of action films. But why stop there — X-Men: First Class will appeal to any filmgoer because it is a great piece of filmmaking overall.

It opens with the same opening scene as the first film in the series, “X-Men,” did — with a young Magneto, being deprived of his mother, using his powers on an iron gate. For the first time in the franchise, Magneto is a likable character because of two things: 1) When he was Erik Lehnsherr, he was confused young man (like most of us) and 2) Michael Fassbender’s portrayal of him was damned good. I am not saying Sir Ian McKellen was bad as Magneto, because he wasn’t; I’m saying that Fassbender managed to successfully bring the humanity and good side of the character to life. It is during this time that Erik joins forces with Charles Xavier in order to stop Sebastian Shaw, his archenemy who was responsible for killing Erik’s mother, and the very real possibility of World War III.

While discussing leads, on a similar note, Charles Xavier is also flawlessly portrayed by James McAvoy. Like Fassbender, McAvoy puts forth a performance that the viewer can easily relate too and empathize with. And even though the two of Britain’s quickest rising stars steal the show, the rest of the ensemble cast turns in convincing performances with their roles too — most notably Jennifer Laurence (fresh off of an Oscar nod for “Winter’s Bone“) as Raven/Mystique and Nicholas Hoult as Hank McCoy.

But while the viewer is able to connect to the characters thanks to the quality acting, it’s the direction that keeps the pace moving and brings the picture together. Director Matthew Vaughn does a more than commendable job of this in X-Men: First Class. Not only does he manage to create a believable alternate reality, he does so while doing the seemingly impossible job of effectively introducing and squeezing in the backstories of heroes like Professor X, Magneto, Mystique, Banshee, Beast, Angel, Havoc, and Darwin (Gavin Hood had it easy with the history of Wolverine in “X-Men Origins: Wolverine“). In a brilliant sequence (which I would say is one of the best scenes in the film), Vaughn has Doctor Hank McCoy (who he was before Beast) and Charles Xavier testing out the Cerebro for the first time — streaming a chain of clips that highlight the superhero discoveries made by Charles and Erik. A second very stylish sequence (my second favorite in the film) is a training montage — powered by several split-screen shots — where we see the X-Men preparing to stop the greatest threat the world has ever known.

Talking from a technical standpoint, the cinematography, and special and video effects in X-Men: First Class are all top-notch. John Mathieson captures the action and drama with the smart split-screens and effective close-ups, Chris Seagers reproduces a very realistic 1960s world, and Sammy Sheldon dresses everyone in good looking clothing appropriate for the time. The gaggle of effects companies (13 at last count) deliver remarkable computer graphics; the interlacing of human actors with CGI is near seamless and the modeling — the texture of Mystique’s and Beast’s skin, in particular — is very impressive. Even the sound — effects and background music — is significant, ramping up the tension and immersing the viewer in the moment.

This marked turnaround, quite frankly, was a surprise to me considering how lackluster the trailers for the film were. You may or may not agree with me on this point but when compared to the trailers of the other superhero films of the summer — “Thor,” “Green Lantern,” and “Captain America: The First Avenger” — X-Men: First Class was outclassed (I’ll admit some bias as I was underwhelmed by the last few X-Men flicks [“X-Men Origins: Wolverine” and “X-Men: The Last Stand“] too).

But it is good to be pleasantly surprised. Marvel, with X-Men: First Class has another bona fide summer blockbuster on their hands. For those, however, looking for the bonus ending which Marvel has become synonymous for — don’t, it isn’t there (although a cameo by Hugh Jackman in character is a bonus unto itself). What it does have is an ending with an opening wide enough to fit several films through (almost as good as the movie tie-ins); I look forward to other “First Class/Origins” stories that perhaps depict the history of Cyclops, Storm and Jean Grey (all of whom are omitted from this film) which are surely to come.

My conclusion — X-Men: First Class is a first class film. 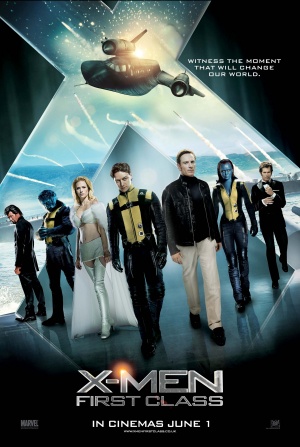