The setting is “Sunder Land,” which will greatly amuse fans of Northern English industrial towns. There’s been a flash of light and a global catastrophe, leaving the planet a razed husk — although it looks more like Molly is hiking across a pleasantly verdant Scandinavia than scouring the scorched earth.

Bongers and Meuwese certainly capture the boredom of surviving the nuclear holocaust. A series of tedious early scenes walk us through a range of tropes: Sifting through trash; rifling through pockets; licking out tin cans; cautiously creeping around empty settlements. Molly even gives a crappy broken toy to a child. That child is Bailey (Emma de Paauw), who Molly rescues and takes under her wing. Innocence in an evil world, blah, blah.

Meanwhile, there is a vicious and madly theatrical opportunist named Deacon (Joost Bolt, “LelleBelle”) who is busy tossing folks into his gladiatorial arena. Suffice to say, these people are not willing participants. Deacon is using a serum to turn common folk into “supplicants,” making them rabid and bloodthirsty and animal-like. His alpha warrior is known as “The Thruth” (Shilton Chelius). But then a man called Bob, who looks like a middle-aged accountant, emerges victorious.

Deacon needs a legend to defeat the fearsome Bob. He has heard the stories of Molly (Bob and Molly? It sounds like a bad sitcom), so he commands his goons to track her down and kidnap Bailey, in the hope this will draw Molly to his den, where he’ll then turn her into one of his gladiators.

What Deacon doesn’t know is that Molly has a mysterious power, seemingly developed Akira-style during her captivity in a lab following the fall of humanity. She can (sometimes?) use a blast of wind to knock people back — kind of like one of Skyrim’s shouts but with a longer cooldown timer. There’s surely room for a fun montage of Molly trying out her power on tin cans and bottles in the woods, but it never comes. Her gift seems to be activated quite by accident, like an occasional mighty sneeze. 45 minutes in, this is the closest we have to an original idea but it’s sadly inexplicable and underdeveloped. (Maybe in the next movie? Amazingly, there’s a sequel-bait epilogue).

As a film, Molly is not without merit. Jochem Weierink’s musical score is more stirring and emotive than the images deserve. For those images, Bongers and Meuwese extensively employ long, fluid tracking shots, which on occasion capture a hint of the immersion of Alfonso Cuarón or Gareth Evans. But “Children of Men” this ain’t, and “The Raid” this ain’t either.

The film looks bad. Exterior scenes have a high-contrast, bleached, soft-focused appearance which is horrible on the eye, like everything has been oversaturated in post. Interior sets look like something out of “Robot Wars,” and everything is lit and art-designed like the Industrial Zone from Richard O’Brien’s “Crystal Maze.” The costumes look like thrift store fancy dress. But look, all that stuff is par for the course in low-budget sci-fi.

What cannot be overlooked is the script and the direction. The words are hackneyed at best, and the dialogue scenes are dismally static, coming across more like script readings. Thankfully, dialogue is sparse. Most of the narrative is focused on the action, and here’s where it really falls apart. The action scenes are shot in extended takes with concealed cuts, which is a stylistic choice both ambitious and disastrous because it only draws attention to the terrible choreography and the complete lack of weight to the combat.

There is something almost mesmerizing about this relentless morass of bedroom play-fighting masquerading as action cinema. The filmmakers may well contest that “real” fighting is messy. But real fighting is also visceral and brutal and convincing. And it is definitely brief — these lifeless scraps are interminable.

The showdown between Molly and head goon Kim (Annelies Appelhof, “The Spa” TV series) is particularly exhausting, as they wear each other down with “Samurai Cop” standards of swordfighting. (I confess, I did muster a laugh when Molly, mid-fight, appears to fashion a hat out of a flag for her opponent). In truth, Molly wins most of her fights through the incompetence of her opponents rather than her legendary skill. It’s vicariously disempowering.

Molly is an action film where the action — which occupies 80% of the narrative real estate — is the weakest aspect. This is a particular pity because in an age where incomprehensible nonsense like “Mile 22” exists, the notion of eliminating quick cuts is laudable. Sadly, what Molly gains in ambition she loses in delivery. The result is a deeply silly, boring and repetitive experience. 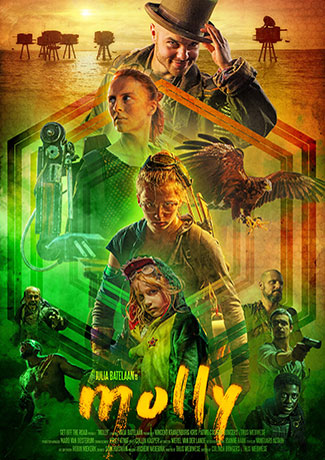