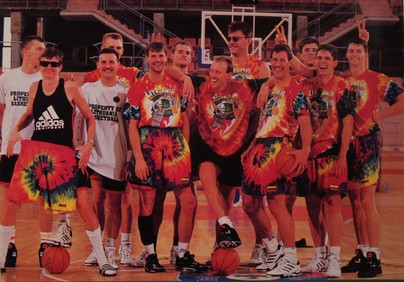 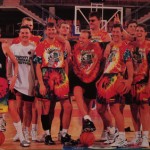 At the 1988 Seoul Olympics, the Soviet Union basketball team beat the U.S. squad for the gold medal and more importantly, bragging rights. In what is assumed to be a U.S. dominated sport in which an American team had only failed to get the gold once before, they not only lost, but tragically, they lost to communist Soviets. The Other Dream Team is not about the redemption of bruised American egos or of the games as a geopolitical extension of communism vs. capitalism, it is about the true composition of that 1988 Soviet team.

Four of the starting five players for the Soviet Union were not ethnically Russian, they were Lithuanian. This is much more than the difference between being from New York rather than Minnesota or from being dyed in gray Confederate wool rather than northern Yankee blue. Prior to World War II, Lithuania was an independent country. As the southernmost Baltic state, Lithuania had the unfortunate luck of being sandwiched between global empires bent on totalitarian domination. Throughout history, the Baltic states were just been a stepping stone on the way to greater battles.

Lithuanians are not Russians though; they have an entirely separate language, culture, and identity. Lithuanians also love basketball. In the 1930s, Lithuania even hosted the European basketball championships and won the tournament twice. However, after the end of World War II and Lithuania’s subsequent envelopment behind the Iron Curtain, the best basketball players played for the Soviet team under the Soviet flag. Yes, the Soviet Union won the gold in 1988, but to every Lithuanian out there, they know who was really on that court.

The Other Dream Team profiles the star players on that team, and if you are a basketball fan, you will recognize a few of those names including future NBA players Arvydas Sabonis and Sarunas Marciulionis. Growing up in Lithuania, these boys experienced the same hardships as they would have growing up in Russia: Ten year wait limits to buy a worthless car, food shortages, omnipresent suspicion, and no hope of ever seeing the West, let alone playing basketball there. They played on local club teams and whenever the Army-trained Moscow team came to town, regular life would stop as all Lithuanians would gather round the TV or radio to cheer on the local boys over the Russians who represented what everyone realized was a fading empire.

In 1989, the Berlin Wall fell. In 1991, Lithuania proclaimed its independence right in front of a brigade of Soviet tanks and menacing troops. There is news footage and first-hand testimony about fathers and brothers who did not come home after the first independence protests because they were killed by Russian soldiers. Suddenly and very unexpectedly, the Russians were gone and Lithuania was a country. They could democratically elect their own leaders, start their own businesses, and certainly not least, march under their own flag at the opening ceremony of the 1992 Barcelona Olympics.

Every American who remembers the 1992 Olympics thinks of the Dream Team. Michael Jordan, Larry Bird, and Magic Johnson are just three names of the elite talent the U.S. sent to Spain to mop up the competition and restore America’s rightful spot at the top of the basketball pyramid. They were global superstars, 11 superior basketball phenomenons and Christian Laettner. A footnote at the bottom of the Dream Team’s media goliath was the Lithuanian team who could not even afford uniforms. However, because of an amusing turn of events, The Other Dream Team makes such an unlikely documentary because of The Grateful Dead . . as in the band. 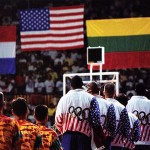 Next to the “Dream Team.”

The Grateful Dead were big basketball fans and learned about the struggling Lithuanian team’s predicament. Therefore, in the mail one day arrives boxes of tie-dye t-shirts and shorts with the colors of Lithuania’s flag and a skeleton basketball player on the front. These items became the most sought after souvenirs at the Barcelona games. If you were turned off by the megalomania and spectacle of the real Dream Team, Lithuania was the suddenly the team to root for.

The Other Dream Team will, obviously, mostly appeal to basketball fans. That’s not say others cannot enjoy it. Passing fans of the sport interested in seeing how international relations impacted athletes or Lithuania’s niche part in the Cold War, will also enjoy the film. The Other Dream Team is not as hard-hitting as “Hoop Dreams,” though, but perhaps that is because of its more uplifting atmosphere. First time feature documentary writer and director Marius A. Markevicius brings forth an overshadowed, hard-knock group of basketball players from an out of the way country and has the audience truly wishing them victory, even over the likes of Michael Jordan. This fact alone supports the global reach of the story and everyone’s desire to see the underdog succeed. 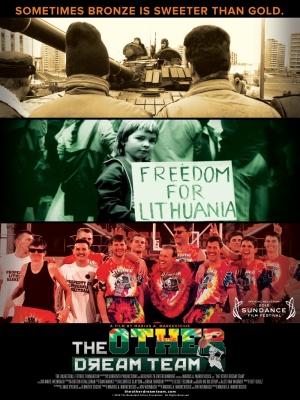