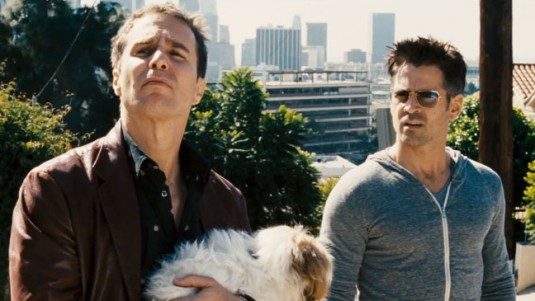 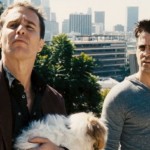 Seven Psychopaths may be the best movie title of the year. Martin McDonagh certainly has a way of coming up with apt and memorable titles for the audience to carry around with them, he is also responsible for “In Bruges.” One could easily argue that Colin Farrell and Brendan Gleeson were also psychopaths in “In Bruges,” but “Two Psychopaths” doesn’t work nearly as well when you can cram a full seven in there instead (even better when one of them is Christopher Walken).

Two mid-level gangsters are hanging out griping about the gangster business, specifically about whether or not either of them has ever shot anybody through the eyeball. This is exactly the same conversation the two gangsters in McDonagh’s first film could easily have had. Hell, Seven Psychopaths looks like it might as well be “In Bruges 2: Los Angeles.” However, these two gangsters immediately stop their conversation when a hooded assassin somewhat casually walks up behind them, shoots them in the head, and leaves a jack of diamonds on each body — enter the Jack O’Diamonds killer. This was a good move by McDonagh. He sets the audience up with two guys spouting “Pulp Fiction” dialogue and abruptly offs them to let the audience know they better be careful, Seven Psychopaths is odd, unpredictable, and may take a 180-degree turn when they least expect it. It also means there is a fresh film here and not just a knock-off of something seen already.

There is a film within a film in Seven Psychopaths and it too is named “Seven Psychopaths.” Marty (Farrell) is a struggling screenwriter who thinks a bit of alcohol will take the edge off and let the ideas flow like wine. The problem is the glass of wine turns into a margarita and then into a bottle of bourbon. This is no way to reliably develop characters on the page. Billy (Sam Rockwell) is Marty’s actor friend and wants to motivate him but as any good friend does, he reminds Marty that since he is an Irish writer, there is no fighting alcoholism, it is in his blood. Billy tells Marty some good stories which he should put in his screenplay about the Jack O’Diamonds killer and a guy called the Quaker killer. Each time one of these stories is told, Seven Psychopaths breaks away from reality and shows us sort of a short story which is narrated by either Billy or Marty. The real seven psychopaths are not the characters in Martin McDonagh’s film, but in Marty’s screenplay.

Billy is only a part-time actor though. To make money, he works with Hans (Walken) to kidnap dogs, wait for the reward poster to be put up by worried owners, and then heads off to collect the dough. Naturally, they kidnap the wrong guy’s dog. Charlie (Woody Harrelson) loves his Shih Tzu Bonny. When Bonny turns up missing, Charlie and his goons start killing people. It’s not all bad news though, these violent segues are really helping out Marty’s screenplay even though the body count is starting to rise. Both Billy and Hans start contributing ideas for the screenplay: Character backstories, motivations, and even possible dream sequences and endings are in high demand. Running and hiding from a vengeful gangster can be nerve-wracking, but fleshing out an effective screenplay is a good hobby to take your mind off of your troubles for awhile. 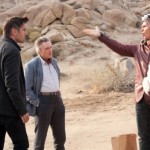 The first half of Seven Psychopaths is one of the best films of the year; unfortunately, the second half torpedoes what was shaping up to be a surprising success. The psychopath vignettes are original, creative, and the best part of the movie. An oddball named Zachariah (Tom Waits) pops up to contribute one you will not soon forget. Halfway though, with the real characters on the run from Charlie, the story becomes far too reminiscent of “Scream.” In that series, the characters knew what was coming next because they were very knowledgeable of the horror genre. They described the types of characters who would not make it to the end and even in what order they would start to fall. Seven Psychopaths turns self aware and veers directly into similar territory, but with the action genre. Billy points out the best spot to have a final showdown, which characters will get shot and why, and he gets quite angry if Marty or Hans does something to interfere with how this is all working out in his head.

Notwithstanding Seven Psychopaths has an ill conceived second half, it is still bizarrely fun entertainment. Not as much as “In Bruges,” mind you, but enough to make this action/gangster/buddy movie a worthy sophomoric effort by McDonagh. And if nothing else, the casting of Christopher Walken as a psychopath is a brilliant piece of matching a man with a part. His spiked, “Eraserhead” kind of hair, blank stares and interesting delivery, would make even Hannibal Lecter remark, “Wow, this guys is nuts!” 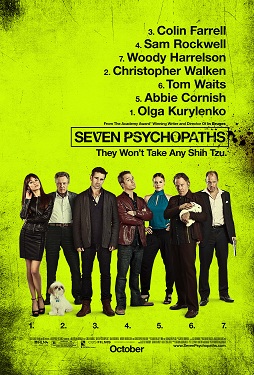