For the sake of curiosity, the only selling point that angsty indie drama One More Time appears to boast is its depiction of Christopher Walken and Amber Heard of all people as father and daughter. That’s an odd pairing right there and while Walken’s shtick is one of the most famous in the business, he’s not usually cashing his checks for playing the dad of some sputtering starlet. Putting the two of them together could pique someone’s interest in this movie that otherwise sounds like it’s been cobbled together from a couple decades’ worth of familiar indie movie pieces, but upon closer inspection, the picture is . . . actually pretty good.

Sure, it is indeed treading territory that is so quintessentially American indie that writer/director Robert Edwards could just as easily steer the story into parody, but the movie is surprisingly sharper and sweeter than the premise and cast would suggest. Well, bittersweeter at least. The familiar narrative pieces here include a washed-up artist, a wayward youth seeking direction, and a whole lot of family dysfunction.

What makes this particular employment of these elements work is mainly the acting, though Edwards’ script helps because it’s ultimately more honest than calculated. Edwards does a fine job of extending plot threads beyond the scope of his picture as well, so there’s a sense that the character arcs aren’t neatly wrapped up and these people still have a long way to go to find that elusive thing that will make them happy.

It’s an admirable, if unremarkable look at how families stick together and stand by each other even when there are more than enough reasons to let go and walk away. It’s also about the challenges of finding your place in the world as you grow up and leave behind that period when a certain recklessness seems justified. Jude (Heard, “Machete Kills”) has plenty of reasons to be angry at her dad Paul (Walken, “Eddie the Eagle”) and yet the movie keeps reiterating that while Jude’s emotional problems have an obvious source, she still needs to get on with her life and stop blaming her father for everything.

This leads the story down a thornier path than one might expect from a movie of such seemingly simplistic makeup. Edwards makes no bones about how badly Paul has messed up his family, but he doesn’t ask us to hate Paul as a result. We’re supposed to feel sorry for both Jude and Paul, while understanding that the silver lining exists only for Jude, who still has time to turn it around and forge a new path. Paul can’t change, refuses to change, won’t change, but it’s not too late for Jude. And Paul knows this, which makes him a more sympathetic character than the stock villain he could have been.

The main theme that Edwards wants to attend to here seems to the importance of growing up. It’s hard, but it has to be done. Paul hasn’t really grown up despite his age and it’s ruined him. Jude’s sister Corinne (Kelli Garner, “Horns”) doesn’t have much of an arc to mull over, but her chilly, constrained self factors into the story as a counterpoint to Jude’s messy emotions. Corinne has an adolescent son who mostly comes off as unlikable and anti-social, amounting to a rather unoriginal addition to the movie. But even he suits the theme because while he has next to nothing do in the movie, his dour attitude isn’t used as some lame attempt at comedy, instead just reminding us that growing up is tough at all ages.

Some of One More Time is quite contrived, so it’s hardly going to inspire a greatly glowing recommendation, but it is nicely shot, well acted, and relatively insightful about its subject. This is mostly Jude’s movie and Heard carries it well, bringing a looseness to the role that reaches comfortably for naturalism. Walken’s trademark charm gets a decent workout here and seeing him play an aging crooner who edits his Wikipedia profile to puff up his ego is fun, making room for some particularly “Walken-y” moments.

It’s not the most memorable look at angsty family relations, nor the most moving, but One More Time is much better than it could be, trading expected sentimentalism for a tender acknowledgement of life’s complexities. Much of it has been seen and done before, of course, so it’s nice that Edwards wisely leans on his cast to keep the drama from growing stale. While Walken and Heard as father and daughter sounds like it’ll be worth nothing more than a derisive laugh, they actually achieve something more noteworthy than unintentional comedy. Certainly nothing as touching as a tear, but a fond smile seems fair. 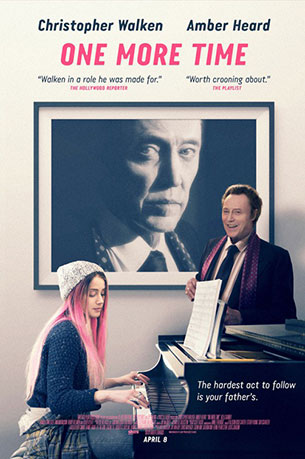