The increasing number of recent films featuring stories of Christian faith or history (“God’s Not Dead 2,” “Miracles from Heaven,” “Risen,” just to name a few) hearken back to the days when Biblical films ruled the motion picture landscape. From 1953’s “The Robe” to 1956’s “The Ten Commandments” and “Friendly Persuasion” to the grand-daddy of them all, 1959’s “Ben-Hur,” which captured 11 Academy Awards, epic films of faith were consistently popular and critically acclaimed.

Then, we as a society, began moving away from such topics, instead relying on such formally taboo subjects as drug and alcohol addiction, prostitution, infidelity, adultery and extreme violence, among other things. Occasionally, a positively religious movie would be released, but quickly fade.

Now we can add another historical Biblical tale to the tally with the release of The Young Messiah. Directed by Cyrus Nowrasteh (“The Stoning of Soraya M.”) and based upon the book Christ the Lord: Out of Egypt by Anne Rice, it is a fictionalized story that looks at the life of a young Christ from age seven when his family traveled from Egypt to return to Nazareth. Because it’s a time which is largely overlooked in Bible narrative — his teaching in the temple at age 12 is one of the few examples of his childhood being mentioned — it leads many may wonder just what kind of child the Savior actually was. As the Son of God, was he perfect even as a youngster? To emphasize that gap, there’s a “Bobcat” Goldthwait routine where he imagines life in Jesus’ household: “Why can’t you be like your brother?,” Mary asked one of the other children. “Because he’s Jesus,” the kids says. I didn’t say it was necessarily funny, but it shows that there is much speculation in the story of the Prince of Peace as a young man. National Lampoon magazine also ran a parody TV guide which featured a show called, “Jesus as a Teenager” and wrote that he mowed neighbors’ lawns and helped “old people cross the street.”

Here, the story begins in Egypt with a young Jesus (played by a somber Adam Greaves-Neal, “Curse of the Witching Tree”) realizing there is something very different about himself than the other children his age. His parents, Joseph (Vincent Walsh, “300: Rise of an Empire”) and Mary (Sara Lazzaro, “Ten Winters”), are aware of his divine heritage and are fearful of what exactly that means (Joseph, who had seemed to have really been left in the dark over the whole matter initially, is especially bewildered as what to do although he stands firm in his convictions of his son’s divinity). Ultimately, however, it leads them to sacrifice everything to return to their homeland.

Sean Bean (“The Martian”) makes an appearance as a Roman officer who is sent by Herod (Jonathan Bailey, “Testament of Youth”) to intercept the child during this trek, but instead, after seeing something special in the boy, lets him on his way. In addition, a rather weird character, the Prince of Darkness, played by Rory Keenan (“The Brothers Grimsby”), shows up to pester the moppet. It seems a little earlier for such badgering, as Satan did not make his appearance in the Gospels until after Christ began his ministry at age 30.

Still, while people can argue to details and historical accuracy (although production and costume design is well done and appears authentic), there is no denying that there is a good amount of earnesty and decency in this film. There is also surprisingly few moments of preachiness, leaving the viewer most pleased than sermonized.

Is this a genuine spiritual re-awakening or just another outlet for Hollywood to attract Christian viewers to the cinema (and possibly exploit)? I cannot answer that question, but it is refreshing to see this perspective treated with as much respect as other genres. The Young Messiah may not convert anyone (and it surely isn’t trying to), but it should answer a few queries and may get even the most jaded individual interested in the story of the young Messiah. 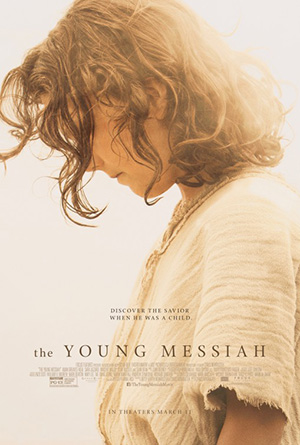