The mythically nostalgic allure of the adolescent summer spent at the lake crosses paths with the trashy, twisty nastiness of the psychosexual thriller in Careful What You Wish For, an entertaining, though highly derivative jaunt through the usual genre motions. For some reason, the protagonist is played by a Jonas brother, but Nick proves capable of capturing the character’s wooden awkwardness and loosening up at key points in the story. He’s Doug, a book-smart teen who is spending the summer at a cabin with his parents. He’ll work at the local watering hole and try to get some reading done, unless his buddy Carson (Graham Rogers, “Love & Mercy”) has any say in it.

All Carson wants to do is live the dream and make this a summer to remember, so he lays out his plan to hit on every girl in sight immediately upon Doug’s arrival. Doug is clearly not the smooth-talking type, but he goes along with Carson’s antics because Doug is an affable guy. But is he gullible, too?

When a wealthy couple move into the lavish mansion next door, Doug quickly becomes curious about bombshell Lena (Isabel Lucas, “Knight of Cups”), the wife of abrasive businessman Elliot (Dermot Mulroney, “Insidious: Chapter 3”). Doug ends up working on a boat that Elliot wants refurbished, but he can’t stop turning his gaze to Lena. One thing leads to the next and eventually an affair breaks out between the pair, leading to tense moments where they fear they’ll be caught by a surely furious Elliot.

This is all par for the course in a psychosexual thriller, of course, but Jonas and Lucas at least exhibit enough chemistry to make their romance engaging. Mulroney plays Elliot as a typically unlikable rich guy, making it very clear that we’re not supposed to feel bad for him in this situation. We’re supposed to root for Doug and Lena instead. After all, they make a cute couple and Doug is innocent while Elliot is smug.

Plenty of twists lurk around the corner, though, and all it takes to see most of them coming is the vaguest flicker of familiarity with psychosexual thriller tropes. That doesn’t mean it’s not enjoyable on some simplistic level to watch the twists unfold, but it blatantly exposes the movie for what it really is: A teen take on a genre mold we’ve seen countless times before. In that sense, it’s a pleasantly quick paced version of the recycled events and the summer setting provides a cozy feel that makes it all seem like rather harmless entertainment.

The lack of originality and effort ultimately sinks the picture, but not before the reveal of one particular twist that’s actually far less predictable than the others (at least to my eyes). The sheer nuttiness of it all is charming in its attempt to show some imagination and the hokiness of the reveal doesn’t stop me from having to admit that the filmmakers successfully tricked me with this one.

But that’s Careful What You Wish For in a nutshell. A bunch of passable scenes and moments reenacted from a laundry list of past movies and one final twist that’s fun and unexpected, if also comically delivered. There’s certainly plenty of room for this movie to be much worse than it is. The concept of a psychosexual teen thriller starring a Jonas brother doesn’t exactly inspire confidence, but it turns out to be a slick and mildly amusing reconfiguration of the usual genre pieces. It captures that sweet sense of summer adventure that makes kids excited and adults nostalgic while aspiring to be nothing more than disposable sun-soaked cheese.

'Movie Review: Careful What You Wish For (2015)' has no comments 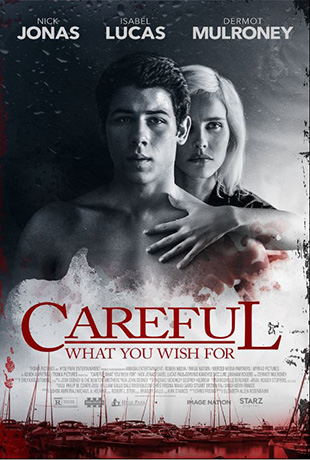