As lazy and obvious a comment as this is, Little Monsters is the Australian answer to “Shaun of the Dead.” From the interweaving of domestic and personal issues with the problems of a zombie outbreak, to the referential rendering of the undead and how they operate, writer-director Abe Forsythe displays a snappy wit, a warmth for his characters, a clear affection for genre cinema and a talent for splatter and gore that echoes Edgar Wright’s brilliant 2004 zom-rom-com. But Forsythe dares to go where Wright feared to tread (or had no reason to): He works with children and animals!

The film begins very much as a domestic comedy, as we are introduced to our apparent hero Dave (Alexander England, “Alien: Covenant”). Dave is what might happen if you merged Shaun (Simon Pegg) and Ed (Nick Frost) from “Shaun of the Dead”: A pitiful, layabout man child clinging on to the now distant time when he was in a moderately successful band, and therefore cool. His days consist largely of (pointless) busking, smoking weed, masturbating and arguing with his girlfriend Sara (Nadia Townsend, “Knowing”). The title sequence is played over an argument montage between Dave and Sara, quarreling about seemingly everything in their relationship. It is the kind of sequence that could be painful to watch — and clearly is for their friends — but Forsythe’s interspersing of the arguments with the hopelessness of Dave largely justifies Sara’s anger. Some of the arguments are seen and heard, others just seen or heard, but it is all understandable.

The deftness of this opening montage demonstrates Forsythe’s cinematic skill, as camera moves, sharp cuts and varying focus convey all we need to know in an economical fashion. After walking out on Sara, Dave crashes on his sister Tess’ (Kat Stewart, “West of Sunshine”) couch and tries to learn responsibility by helping to care of his nephew Felix (Diesel La Torraca). Dave’s attempts to be a good uncle lead him to encounter Felix’s gorgeous teacher Miss Audrey Caroline (Lupita Nyong’o, “Us”). In a transparent attempt to get closer to Audrey, Dave offers to help chaperone a school trip to a petting zoo. As it would happen, the zoo, filled with adorable lambs, kangaroos and koalas, is next to an American military base which suffers a zombie outbreak, because why wouldn’t it? From there, hilarity and horrors ensue with gleeful abandon.

One of the challenges of presenting monsters familiar to the audience is how familiar they are to the characters. Again like “Shaun of the Dead,” Little Monsters uses a video game to introduce both the concept of zombies and how to deal with them, but once Audrey and Dave encounter actual zombies there is a learning curve before they figure out how to deal with them. In the absence of firearms, necessity breeds invention, and there is a winning delight as Audrey accidentally stabs an animated corpse with a pitchfork, only to find the rotting bastard is still moving and she needs to pinion him to a tree. Later, when she discovers the best way to dispatch zombies with a spade, her relieved delight is palatable as, crucially, it didn’t take her took long. While Little Monsters does include the horror trope of characters being very stupid, the characters in question tend to be stupid anyway, while the smart one doesn’t make that kind of mistake. Interestingly, there is further familiarity with the walking undead, as two characters ask if “this time” they are dealing with slow or fast zombies. Purists can relax, as these are properly old school, Romero-style zombies, facilitating humor with their slow movements that allows potential victims to run around them (despite many people still getting caught) while not skimping on the gore.

The film’s blend of gory shocks and smart humor proves a winning combination, especially with the addition of two further contrasting elements. First is the foul-mouthed and utterly inappropriate behavior of Dave and also Teddy McGiggle (Josh Gad, “Murder on the Orient Express”), a children’s entertainer beloved by Felix and the other kids, who turns out to be even worse than Dave in his selfish and crass behavior, not to mention confessions of sexaholism and being so desperate for a drink that he downs methylated spirit. Second is the kids themselves. Felix is the most prominent but others also stand out (including one that is the butt of unnecessary fat kid jokes), and together the five-year olds constitute an entertaining bunch that are both endearing and at times ghastly, although it is often unclear who is the biggest kid of the lot.

Fortunately, there is at least one adult in all this craziness. Audrey is brilliant: Fierce yet compassionate, resourceful and affectionate. Whether she is calming Dave down or putting Teddy in his place (with a pointed souvenir, no less) or convincing the children that everything going on around them is a game, she is a kick-ass heroine who dispatches zombies with the same competence as teaching her students to care, think and develop. The film is pleasingly egalitarian, as while Audrey takes the lead, Dave’s immature and irresponsible behavior is never excused but still made understandable, making his arc compelling. Indeed, when his childhood trauma surfaces, Dave becomes more sympathetic as we realize his stunted development has a particular reason. As is often the case, being stuck together in a zombie outbreak (we’ve all been there) causes bonds to develop, incorporating Audrey, Dave and Teddy, and thus the audience can feel the danger they are in.

While it may offer little that is original, Little Monsters incorporates a great deal of imaginative fun. The sentiment, scares and sniggers are well-balanced and Forsythe features many inventive moments, especially references to Darth Vader. And it also includes the best use of Taylor Swift you are ever likely to see in a horror movie. 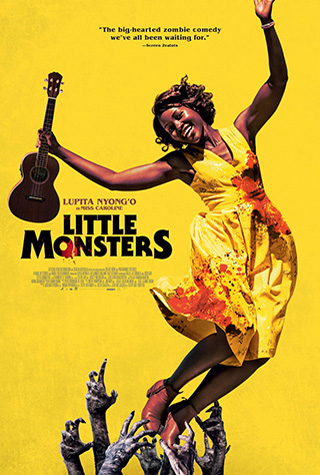