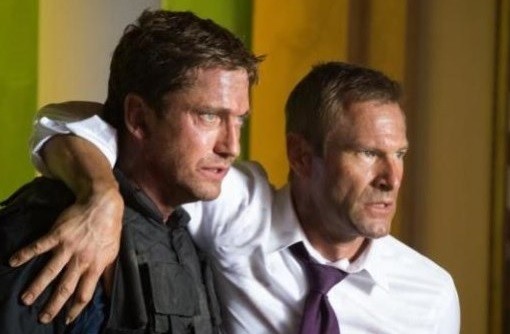 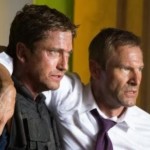 U.S. Presidents have not always fared so well in Hollywood over the years. After all, Franchot Tone died of cancer in “Advise and Consent” (1962), Henry Fonda had to deal with the Reds blowing up everything in “Fail-Safe” (1964) and Fredric March was weakened and almost overthrown that same year in “Seven Days in May.” In more recent times, Richard Nixon was pilloried in “All the President’s Men” (1976), Jack Warden as President ‘Bobby’ was made to look foolish in “Being There” (1980), John F. Kennedy was blown away in “JFK” (1991), Bill Pullman had his residence destroyed AND had to appear with Will Smith and Randy Quaid in “Independence Day” (1996) and Harrison Ford survived bullets, terrorism and a plane crash in “Air Force One” (1997).

There are certainly more examples, but I think the point has been made. The newest Chief Executive to suffer the slings and arrows of outrageous fortune is Aaron Eckhart (“The Dark Knight“), who, as President Benjamin Asher, is kidnapped, beaten and held hostage in the action thriller by Antoine Fuqua (“Training Day“), Olympus Has Fallen. And while borrowing quite heavily from “Die Hard,” as well as the TV series “24,” it has enough bangs, flashing lights, falling aircraft and piling bodies to stand — somewhat — on its own as a decent entry into the genre.

The lead, however, is Gerard Butler who, coming off twin turkeys “Chasing Mavericks” and “Playing for Keeps,” has a lot to prove here. As Secret Service Agent Mike Banning, he needs not only to work his way back into the audience’s good grace, but the White House’s as well. It seems after saving the president’s life in an automobile incident 18 months prior (at the cost of the life of the First Lady (Ashley Judd, “Dolphin Tale”)), Asher rewarded him by kicking him off his detail because the memories were just too painful.

Now working at a desk at the Treasury Dept., Banning is at the right place and the right time when North Korean terrorists, through an amazing battle plan and several convenient plot holes one could drive tanks between, take over and secure the White House. The President, Vice President, Secretary of Defense (a feisty Melissa Leo, “The Fighter“) and Chairman of the Joint Chiefs of Staff are also captured and held in the building’s bunker. Surviving and uttering lines like, “I’m the only chance you got,” Butler gets to play the John McClane part that Bruce Willis once owned (during the first two films, anyway). And while not nearly as fun or sardonic as Willis was then, Butler is light years better than him in the last installment of the franchise, “A Good Day to Die Hard.”

As expected Olympus Has Fallen has more than its fair share of killing off of the bad guys. Many are offed with relative ease by various means (broken necks, gunshots to the head, strangulations, slit throats, knives to the brain, etc., etc., etc.); none, however, are dispatched with the clever patter of other action heroes. They all lead to the top dog, Kang (Rick Yune, “The Man with the Iron Fists“), who, while evil enough, could have used a little of the delightful brutality of Anthony Hopkins in “The Silence of the Lambs,” or Gary Oldman in “Air Force One,” and make it seem he at least relished being the bad guy.

There’s a few side arcs to follow while all of this is going on — most notable of them is the one involving Speaker of the House, Rep. Trumbull (Morgan Freeman, “The Dark Knight Rises”) who has to decide between obeying the terrorist decree of recalling the Seventh Fleet and pulling troops form the North-South Korean Demilitarized Zone or saving the lives of the hostages, as Secret Service Director Lynn Jacobs (Angela Bassett, “What’s Love Got to Do with It“) and Joint Chiefs Gen. Edward Clegg (Robert Forster, “The Descendants“) throw their two cents in. 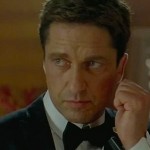 So, will Banning save the day and can Butler save his career?

The first part of the question is a foregone conclusion. The second, not so much. Fuqua, who directed Denzel Washington to a Best Actor award in “Training Day,” does not have those kinds of chops here. But with several Oscar nominees (as well as winner in Freeman and Leo), the cast helps him raise Butler’s effort above that of your ordinary film of this genre. Freeman, Leo, Bassett and Eckhart are especially earnest in their roles and bring just the right amount of support and realism.

In the end Olympus Has Fallen is loud, violent, messy and sometimes just plain ridiculous (as when it takes almost hours to get the military to arrive in force at the scene), but if you suspend a little disbelief and are in the mood for such a picture, you will no doubt be on the edge of your seat throughout. 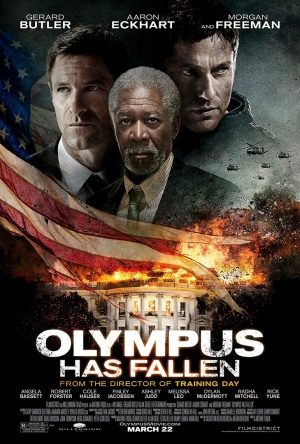