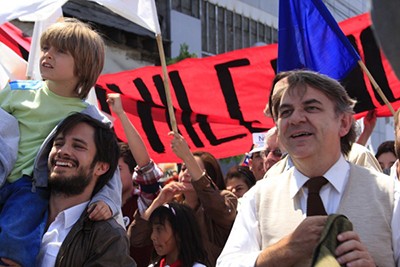 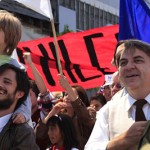 Nicholas A. Christakis, a physician and social scientist at Harvard Medical School, published a provocative article in 2008 in the British Medical Journal, titled “Dynamic Spread of Happiness in a Large Social Network.” In it he states, “Happiness is more contagious than previously thought . . . Emotions have a collective existence — they are not just an individual phenomenon.” One would normally not associate a political election, however, especially one against a brutal dictator, to be about happiness, but an advertising campaign that created a context of ecstasy, joy, and celebration achieves success in Pablo Larrain’s Oscar-nominated film, No, a look at the media’s role in the decisive plebiscite in Chile in 1988 that ousted General Augusto Pinochet.

The referendum, held as a result of international pressure, was expected to be won easily by Pinochet, given the context in which the election was held, a context that had seen thousands of political opponents, both real and suspected, murdered by the regime over a period of fifteen years from 1973-1988. Using a U-matic video camera from the period to add authenticity, No focuses primarily on the media’s role in promoting both the “yes” and “no” sides (“yes” retains Pinochet, “no” removes him from power). Gael Garcia Bernal is René Saavedra, a young advertising consultant whose marketing campaigns for a variety of companies have been successful and is approached by the “no” campaign to become a consultant.

At first reluctant to become involved, he overcomes the resistance from his ex-wife Verónica (Antónia Zegers), who believes the vote will be rigged in spite of the “no’s” best efforts, and his boss Lucho (Alfredo Castro), a supporter of the “yes” forces. Both sides are provided fifteen minutes each night on television to make their case, but the issue of how to approach the campaign is contentious. Most believe that to win the election, it is necessary to describe and dramatize the many examples of torture and murder carried out by the military under Pinochet. Saavedra, however, is persuaded that the use of marketing techniques similar to those used to sell commercial products such as soft drinks and cosmetics would be more successful. 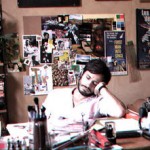 Instead of showing pain, the “no” campaign emphasizes the joy that will come to Chile without the dictator. To that end, Saavedra creates jingles, a logo depicting a rainbow coalition of supporters, T-shirts, buttons, personal testimonials (including celebrity “no” supporters like Jane Fonda and Christopher Reeves), ads filled with humor and smiling, happy faces, many culled from archival footage. The darker side of the story is also told but with less emphasis. The depiction of the advertising campaign, while not exactly endorsing hucksterism, shows to what extent the advertising mentality has become part of the culture in which we live. In showing the campaign from the media point of view, Larrain puts a fresh angle on the story, one that otherwise might have become too despairing for most audiences.

In spite of some of its humorous touches, however, No is not fun and games. A great deal is at stake and the regime knows it. Bullying tactics of the government’s enforcers are shown raiding “no” rallies, and threatening René and his associates, even his son, Simon (Pascal Montero), whom he is compelled to leave with his ex-wife. Garcia is excellent as the film’s leading presence. His strength of character routes the film away from either cynicism or sentimentality, and, as a result, it becomes a moving testament to the power of people acting together to make a difference. The bottom line is that heroes come in all shapes and sizes, sometimes even in Coke salesmen. 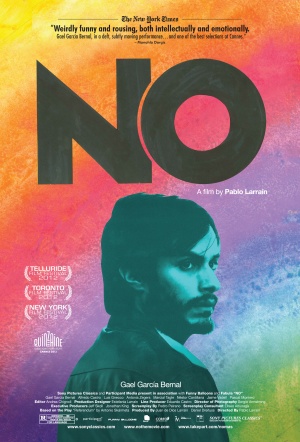