“When you can hold the pain of the world in your heart without losing sight of the vastness of the Great Eastern Sun, then you will be able to make a proper cup of tea” — Chogyam Trungpa

Chinese Zen master Wumen Huikai said “You do not define the truth, you simply enter into it.” That could be a metaphor for Walk with Me, a joyous documentary about Zen Buddhist teacher, writer, and spiritual leader Thich Nhát Hanh who was called “an apostle of peace and nonviolence” by Martin Luther King Jr. who also nominated him for the Nobel Peace Prize. Written and directed by Marc J. Francis and Max Pugh and three years in the making, Walk with Me was filmed at the Plum Village monastery in Southwest France established by Hanh in 1982 after being exiled from his native Vietnam for his campaign of nonviolence protesting the Vietnam War.

The film is not a traditional documentary containing interviews with colleagues or academics offering a historical perspective, but rather an immersive and meditative experience that erases the line between observer and participant. It captures the life of the monastic community as they prepare meals, perform sitting and walking meditation, pray, and participate in chanting and singing. The monks and nuns have surrendered all of their personal possessions, and needless to say, there are no distractions such as cars, smart phones, smart reporters, tourists, or television. Aside from the daily rituals and chores, there is in fact nothing to do, there is only to be.

Employing an unhurried pace that may challenge some viewers, the film invites us to slow down and practice “mindfulness,” the central core of Thich Nhát Hanh’s teaching which refers to being present to each moment. According to Hanh, nothing exists beyond the present moment. Space and time are concepts of the mind and reminiscing about the past or speculating about the future does not bring us any closer to discovering who we really are. To make sure that no one forgets, a bell rings every fifteen minutes to remind everyone to stay focused on the moment and not perform tasks automatically. So that we know that enlightenment is always a work in progress, a young man standing in a line of monks in silent contemplation, fidgets, yawns, and rubs his head in a way suggesting he would rather be somewhere else.

Though there is little actual teaching in the film, there is a touching sequence where a little girl tells the Zen master that her little dog has died and she wants to know how to stop feeling sad. Thich Nhát Hanh tells her to look at the cloud above her and to see that when it passes, it turns into rain and that nothing ever dies. It just changes form. Providing an illuminating context, British actor Benedict Cumberbatch (“Doctor Strange”) narrates portions of Thich Nhát Hanh’s journal Fragrant Palm Leaves: Journals 1962-66 with a background of stunning images of the vineyards in the Dordogne Valley as choreographed by Francis and Pugh. The power of the music composed by Germaine Franco and performed by Sister Trai Nghiêm is deeply moving and I cried when a visitor to the monastery is triggered by the overwhelming beauty of the music and breaks down in tears.

Surprisingly, the film shifts gears, moving from the solitude of Plum Village to the honking taxicabs and street preachers of downtown Manhattan as the monks prepare for a talk by Thich Nhát Hanh during a promotional tour. The visit to New York gives some monks the opportunity to visit their families that they only see every couple of years. While in New York, they visit a women’s prison where inmates ask questions about how they handle the absence of money and the lack of sexual intimacy in their lives. There is also an unexpected reunion when an old friend recognizes a monk that he knew many years ago in the city in which they grew up.

One of the most inspiring moments is a nun’s visit with her elderly father in a nursing home, leading him in prayer and breathing exercises. Although Walk with Me does not probe very deeply beneath the surface, it is nonetheless a fitting tribute to a man revered by millions who is now in his nineties and recovering from a debilitating stroke.

Quaker mystic Thomas Kelly talks about “a whisper, a faint call, a premonition of richer living which we know we are passing by. We have hints,” he says, “that there is a way of life vastly richer and deeper than all this hurried existence, a life of unhurried serenity and peace and power.” In these days when hope and despair are constant companions, Walk with Me brings us closer to the experience of our true nature, allowing us to access, if only briefly, that unhurried serenity and the inner silence that, in Kelly’s phrase, is “the source of all sound.” 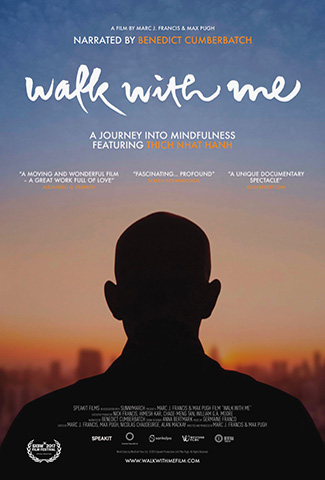