The resiliency of the human spirit is pummeled by a squall of sentimentality in Baltasar Kormákur’s based-on-a-true-story survival drama Adrift, which long vacillates between prettily photographed seafaring and soggy backstory. The movie opens thrillingly in the chaotic aftermath of a storm that has left a luxurious sailboat in ruins and protagonist Tami (Shailene Woodley, “Allegiant”) courageously trying to assess the situation and locate her fiancé Richard (Sam Claflin, “My Cousin Rachel”), but the sense that we’re about to be subjected to an “x months earlier” leap backward in time sets in almost immediately.

Sure enough, the excellent opening is simply the umpteenth example of the age-old tactic to appease easily bored audiences with the promise that action and excitement are coming around the corner, just after we watch these two people meet and fall in love and all that sort of stuff. This familiar beginning can work in certain situations, but it’s artlessly applied here, setting in motion a strictly simplistic structure that Kormákur maintains for the entire movie.

As we cut back and forth and back and forth (and back and forth) between Tami’s post-storm struggles and her whirlwind Tahitian-set courtship with dashing sailor Richard, each block of story informs the events on the other end of the timeline in a crustily clichéd manner that dampens the plot’s pace. It’s a very clunky storytelling mode and Kormákur stubbornly sticks with it, determined to drown the tale’s dramatic impact.

Perhaps the constant time shifts and generally hefty amount of screentime dedicated to Tami and Richard’s love story would work better if their relationship was more engaging or moving on its own. As in all conventionally constructed movies, a stirring emotional connection can go a long way to solving problems caused by a lack of imagination. But while Woodley and Claflin are both very good in their roles, their shared chemistry feels (warning: Another incoming pun) watered down.

Tami makes a more memorable protagonist when she’s essentially on her own, letting her free, independent spirit soar, and Woodley shines the brightest when the movie is simply observing her in survival mode. In the post-storm portion of the story, she rescues Richard from the water and sets him up in the stern of the boat after discovering that he’s badly injured and can barely move. This means that Tami is left to do everything on her own, from raising a backup sail to clearing the rudder to even learning a painstaking navigational process that requires extreme mathematical precision.

In these moments, the movie stays on course because Woodley charts her arc from spunky drifter to determined survivor with compelling coherence. She’s convincing both when she’s initially struggling to figure out her next move and when she’s later captaining the dilapidated boat like the salty, sunburned super-sailor she has become. Tami is at her most interesting and her story at its most thrilling when she is dealing directly and courageously with the seemingly insurmountable odds of reaching land before her dwindling supplies run out.

But the story’s rigid structure is persistent, sapping the dramatic urgency of Tami’s journey with a constant need to return to the past, even if there’s no news to share, meaning we just get Tami and Richard dancing together at a restaurant and/or staring doe-eyed at each other. Shackling Tami’s incredible personal accomplishments to generic romance movie pablum is a shame because it takes away so much screentime from the better, worthwhile parts of the movie.

It doesn’t take long for the relationship-driven portion of the story to run out of major expositional targets, leaving later scenes to tread water in search of some plotted purpose. Eventually, the scenes are just ticking boxes on a checklist. Oh, there’s Richard confessing he loves Tami. And look, now he’s proposing! This would be sweet if it felt like this was the story that needed to be told and if the onscreen pairing could generate the emotional energy required to make a love story work.

But Adrift is the tale of Tami’s survival and that’s what the movie needs to focus on. The water-based photography, Woodley’s performance, and Kormákur’s skill at squeezing out suspense from an individual’s death-defying actions all support the post-storm chunk of the movie quite effectively, suggesting that a picture almost entirely focused on this part of the experience would well utilize all of the movie’s strengths.

As it stands (or bobs), Adrift is only half of the harrowing, hopeful ode to the human spirit it has the potential to be. The other half exhibits too eagerly an intention to swab the deck with treacle. You could say it’s anchorless or emotionally unmoored. The lame chronologically jumbled structure is at least as annoying as all the puns and metaphors in this review. Kormákur can assemble a solid set piece and Woodley can light up the screen, but while Tami finds in herself a gutsy refusal to give up, the movie about her journey finds only that it’s easier to (wait for it!) sink instead of swim. 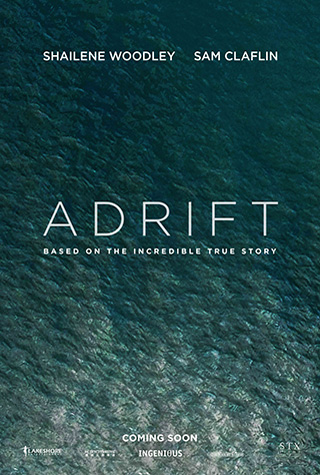