My Cousin Rachel is a smart and evocative exercise in wrongfooting. Right from the beginning — or possibly the end — Roger Michell’s adaptation of Daphne du Maurier’s novel expresses doubt and ambiguity, as narrator/protagonist Philip (Sam Claflin, “Me Before You”) asks “Was she? Wasn’t she?” By the end of the film, any answered questions have been replaced with further questions, leaving a deep sense of ambiguity and admiration at this well-crafted piece of befuddlement.

The opening moments establish the locations, as a sweeping aerial shot captures the beautiful Cornish coastline where Philip resides. Heir to his cousin Ambrose’s estate, Philip has few cares — ably supported by his godfather Nick Kendall (Iain Glen, “Eye in the Sky”) and Kendall’s daughter Louise (Holliday Grainger, “Cinderella”), well-liked by his servants and farm workers, and despite his wealth and privilege a man unafraid to scythe the wheat and herd animals. Yet despite this apparent freedom, Philip rapidly becomes entrapped by his own concerns, as news of Ambrose’s marriage in Italy, and his subsequent sickness and death, draw a pall over Philip’s idyllic life, and doubt and suspicion quickly start to plague him.

Much like the recent “Lady Macbeth,” My Cousin Rachel is a Gothic romance that uses the figure of an untrusted woman to highlight and critique class conventions, especially those regarding female autonomy and sexuality. But unlike “Lady Macbeth,” which is often blatant in its defiance, My Cousin Rachel relies more on obfuscation and ambiguity, the titular character defying expectations both of her social role and the narrative. Philip is warned that Ambrose’s widow Rachel (Rachel Weisz, “Denial”) has insatiable “appetites,” both in terms of spending and other matters (as befits the 19th century setting, no one uses the “S” word). Weisz is superb as the enigmatic Rachel, exhibiting coolness and level-headedness, except when questioned about her character and “appetites.” Occasional moments of anger and outrage are aberrations from what is normally a calm and compassionate figure. The viewer is aligned with Philip’s perspective throughout, sharing his suspicions and prejudice, and therefore his surprise when Rachel turns out to be demure, retiring and a purveyor of tea rather than mischief. Yet these teas themselves become a source for suspicion, as Philip learns more (or at least believes he does) about Ambrose’s experiences and Rachel’s insistences that Philip “drink,” especially when he is ill, sound increasingly sinister.

The Gothic genre often features a hysterical female, but here Philip is the overly emotional one, veering from arrogantly confident to aggressively paranoid to romantically delusional. Claflin’s youthful looks serve him well, making him appear as a boy in a man’s role and often at odds with his strident tones. Moments when Rachel kisses Philip and tell him to “go to bed like a good boy” infuse the drama with Oedipal tensions, which are not defused by more explicit instances of sexual passion that, tellingly, suggest far more pleasure for Philip than for Rachel.

Alongside the two leads, the supporting performances are also very fine, Grainger imbuing Louise with a wit and forthrightness that portrays her not only as the “good” woman in contrast to Rachel, but also as a voice of common sense against Philip’s melodramatic swooning. Perhaps the true star of the film, however, is its mise-en-scene. Michell uses multiple planes of action to suggest various narrative and thematic possibilities, in a way that is highly expressive without being intrusive or overbearing. The frame is often divided by stairs and banisters, fireplaces and vases, with one figure obscured and seemingly entrapped, yet the other is far from free despite their conviction that they are.

Visual motifs of animals appear throughout, from dogs roaming the grand house where most of the action takes place to horses in the barnyard and sheep in the farmland, to ornamental deer and other creatures in the paintings that adorn the walls. This motif suggests the dichotomies of My Cousin Rachel, between human and animal, passion and repression, nature and civilization, British and European sensibilities and male and female identity. The result is a constant tangle of questions, doubts, obsession and contradiction, leading to a satisfying and hugely enjoyable drama. 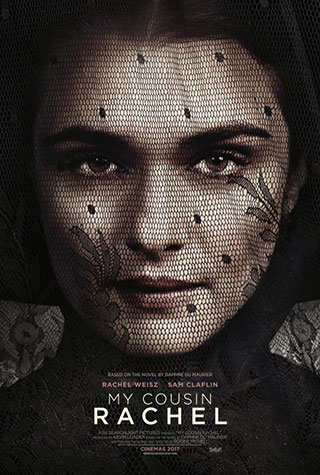