A man, semi-forced into an early retirement, receives a gift from his former staff in the form of virtual reality glasses. Not just ordinary Oculus-type glasses but rather augmented-reality specs with a personal assistant named Auggie that only the wearer can see. The man comes to bond with his Auggie in ways that both enable him to grow as a person and serve to drive a wedge into his otherwise happy life.

The plot to Auggie sounds a little like the plot to “Her,” doesn’t it? Felix (Richard Kind, “Suburbicon”), the man in question, has serious misgivings about his new free time, but his retirement comes just as wife Anne (Susan Blackwell, “Margin Call”) is about to receive a promotion that means more pay but longer hours and as his daughter (Simone Policano, “This Is Our Home”) has decided to move in with her boyfriend. When Felix puts the glasses on for the first time, he’s greeted by his Auggie (Christen Harper, “The Obituary of Tunde Johnson”), a beautiful young woman who is at his beck and call. The Auggies are expensive devices, a faux personification of what brings the wearer happiness. Or what would do so were it not for reality’s cruel intrusions.

In any event, Felix wears the glasses everywhere but — naturally — tells no one about his new toy. Which leads to some hurt feelings when he is inevitably late for family events or when he spontaneously decides to walk around town instead of being with his wife. Meanwhile, Anne is under more and more stress to live up to her new boss’s expectations and to provide for her and Felix. This leads to her unwittingly pushing Felix away to concentrate on work, which leads to Felix spending more time with Auggie, and so on.

The premise, the intrusion of modern technology on familial life, is sound, and it would have been nice if Auggie had explored the theme more satisfactorily. Instead, what the viewer is treated to is more of a comedy of errors. Anne misunderstands what has driven Felix to obsess over his Auggie (ha ha, augmented reality, get it), and Felix has trouble comprehending how his devotion to his new glasses might adversely affect his relationships with his wife and his daughter.

What I mean to say is that the reactions characters have to various scenes don’t feel organic at all — they feel as if they were concocted by a misandrist, to be frank. Imagine my surprise when I saw that two men had written the script (Matt Kane and Marc Underhill), because the movie’s dialog had me thinking that the writers really had it in for Felix in particular and the male of the species as a whole. The incongruent behavior of the characters wasn’t limited to reactions, either. Here’s one scene that’s not a spoiler. Felix, before putting on the glasses for the first time, encounters a woman in a grocery store who appears to be talking to herself while fishing an item out of the freezer. He’s baffled and later on he tells his Auggie that although he didn’t realize it at the time, that lady was probably wearing the Auggie glasses. Except for this: We live in a world where people talk on their phones via Bluetooth or those dopey-looking Apple AirPods, so people appearing to be talking to themselves isn’t the weird oddity it was, say, ten years ago, so Felix really didn’t have cause to be so shocked.

There are some other logical inconsistencies as well, but detailing them here would involve spoilers. Let’s just say that the immediate reaction that wife Anne has to Felix’s new toy doesn’t make much sense given what her character had experienced earlier in the movie. And let’s further note that his daughter’s reaction to be 100% in Mom’s corner with absolutely no evidence doesn’t make a lot of sense, either.

There is a twist, however, that occurs in the final twenty minutes or so of the movie, and it’s a pretty good one. Except that it, too, doesn’t hold up to even mild logical scrutiny. That is, the twist itself makes sense, but it’s not executed very well within the script, and it comes way too late in the movie to rescue the film from mediocrity. Had the entire movie keyed in on this particular aspect, we would have had an entirely different film, one with a fertile and intriguing plot.

Ultimately, the actors do their best, but they’re each hamstringed by some questionable, forced dialog. Richard Kind makes for a perfect schlub Everyman, but his character makes some suspect decisions without much motivation behind him (which is obviously on the writers, not Kind). I feel like Auggie could have been an terrific character study about a lonely man coping with a distant family, but instead we get a dramedy about a man with a pretty great family life who, without much impetus, ruins things and then is beset by the women in his life who help to ruin things even more. 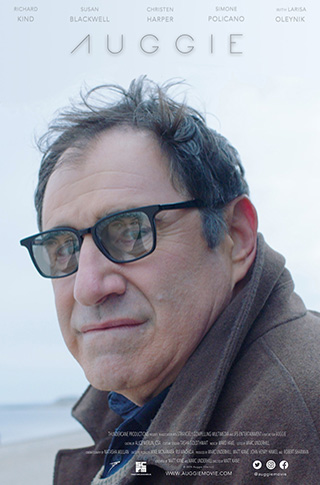