Not everyone may share the same opinion, but this reviewer immensely enjoyed Paul W.S. Anderson’s Death Race. It’s cinematic junk food, sure, but the big dumb fun aspect and the expert action sequences made it easy to dismiss the cold critical heart in this reviewer’s chest and forget that critics are supposed to hate exploitation films like it. Despite its disappointing performance at the box office, 2010’s Death Race 2 eventually moved forward. The title is rather misleading, however, since this is not a sequel but a prequel — it deals with the genesis of Death Race, the beginnings of the legendary Frankenstein, and why Frankenstein has to keep his identity a secret at all times. Despite being a low-budgeted direct-to-DVD/Blu-ray sequel, Death Race 2 delivers massive explosions, beautiful gals, bloody violence, exhilarating car carnage, colorful villains, and thrilling race sequences. And it’s all delivered with slick cinematic techniques and absolutely no pretensions. It would seem we’ve reached the point where direct-to-DVD/Blu-ray no longer means cheap crap.

Before Frankenstein became a legendary star of Death Race, he was Carl “Luke” Lucas (Goss); a getaway driver working for notorious crime lord Marcus Kane (Bean). Following a bank job gone awry, Carl takes the fall and decides to do the time rather than testify against Kane. He ends up on Terminal Island Penitentiary which has been acquired by the profit-seeking Weyland Corporation. In the search for another source of profit, Weyland (Rhames) and his slutty assistant September Jones (Cohan) organize a show called Death Match in which inmates fight to the death. However, the ratings begin to decline, so the ante is raised when Death Match is scrapped in favor of a new game; the more epic Death Race. The island is transformed into a racetrack to host the multiple-day pay-per-view event, in which nine drivers compete to gain their freedom. Luke joins the competition, and, in true Death Race fashion, earns himself an attractive female navigator named Katrina (Phoenix).

Working on a scant $14 million budget (less than one third of the budget of 2008’s Death Race), Dutch director Roel Reiné did a fine job of making Death Race 2 look like a far more expensive film than it is. Reiné’s directorial talents were put to great use here; he managed to craft several exhilarating races and slick action sequences throughout (as opposed to The Marine 2, in which Reiné’s competent technique was hampered by a dire script). The action is not as plentiful or as over-the-top as it was in the original movie, but this is by no means Jane Austen — there’s still ample violence and gore to satiate action lovers, and the film flies by at a terrific pace. Death Race 2 is vehemently old-school as well, with practical effects and real stunts as opposed to masses of CGI. Also worth noting is that Paul Haslinger returned to compose the accompanying score, which is a huge asset (the catchy main theme makes a welcome appearance here). While this film is not 100% on par with its predecessor, there’s still plenty to enjoy about it. The film’s dénouement even leaves room open for further sequels. Awesome.

As thrilling as the action sequences are, screenwriter Tony Giglio’s dialogue is not a strong suit, and character arcs and nuances are practically non-existent. For instance, Lucas feels guilty over killing a bank guard, but this is neglected for the remainder of the film. And sure, there are a few conveniences and narrative shortcuts as well. For instance, the transition from Death Match to Death Race is done in less than a minute with barely any introduction. The task of prepping Death Race seems like a task as simple as visiting the local shops since there are no montages or dialogue scenes to reveal the timeframe between Death Match’s end and Death Race’s beginning. Luke’s transition to Frankenstein is rather forced and truncated, too, though his actual introduction is absolutely bad-ass. Of course, none of these quarrels will affect one’s enjoyment of the movie since this merely affords a brisk pace, but some additional material would have been welcome.

While the cast of Death Race 2 is not brimming with A-listers, the majority of the actors who were assembled for the film at least exert enough genuine talent to ensure the film is not the direct-to-DVD/Blu-ray nightmare it could have been (a couple of minor characters from 2008’s Death Race even returned to reprise their roles here — Robin Shou as driver 14K, and Fred Koehler as Lists (a member of Luke’s pit crew)). Meanwhile, the main role of Carl Lucas was played by Luke Goss. Surprisingly, Goss is an affable leading man — not exactly in the same league as Jason Statham, but nonetheless assured and badass. Other notable actors appearing here include Ving Rhames and Sean Bean. Rhames is his usual awesome self, while Bean chewed the scenery with every line delivery as the villain of the film. Danny Trejo also appears, but he phoned in a strangely neutered performance (made all the more heartbreaking after 2010’s Machete). As the trademark eye candy, Lauren Cohan and Tanit Phoenix are terrific. Not that their performances are terrific, mind you — they are just delicious to look at.

Death Race 2 is probably pretty easy to criticize if you approach it with the mind of a self-absorbed film snob. But who cares? This reviewer knows a fun movie when he sees one. Death Race 2 is brimming with irresistible B-movie charm which shows that Dutch filmmaker Roel Reiné and screenwriter Tony Giglio clearly understood the appeal of Paul W.S. Anderson’s Death Race reimagining, and possessed the creative and technical know-how to replicate it on a much smaller budget. For fans of Anderson’s remake seeking another round of awesome mayhem, Death Race 2 definitely delivers. In fact, this direct-to-DVD/Blu-ray gem easily surpasses several 2010 blockbusters which polluted theaters. 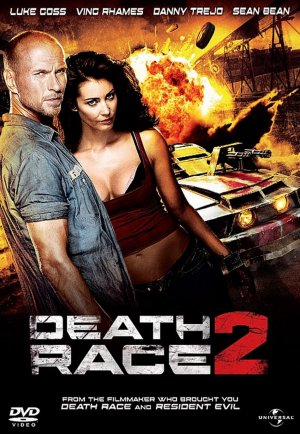